If you miss the Civic Arena, photographer Ed Massery has your fix 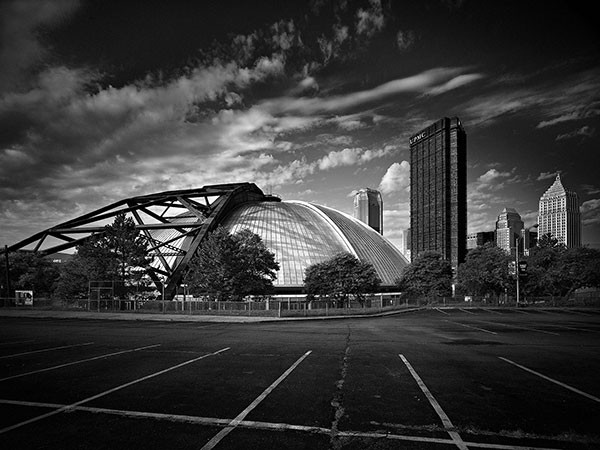 Photo by Ed Massery
Sunset over a landmark: one of Ed Massery's images of the now-vanished Civic Arena

LAST LIGHT — THE CIVIC ARENA: THE PHOTOGRAPHY OF ED MASSERY

Do you miss the Civic Arena? I know I do. Although I only saw a few concerts and sporting events over the years there, I loved the thing as an object of architecture. And that's why I am especially glad that Ed Massery, perhaps the region's foremost architectural photographer, made the half-century-old structure the subject of a series of images before it came down last year. The pictures are on view in the lobby of the USX Tower, courtesy of the Photo Forum Gallery.

Massery is an accomplished visual poet for hire. In his frequent work photographing buildings for the architects, contractors or other entities who build them, he has a knack for capturing the right moment. It is near the end of the day, and though the sun sets with vivid, painterly swaths across the sky, there is enough light to illuminate the building compellingly, its handsome profile set confidently in the picture frame. Invariably masonry glints and steel gleams, niceties of architectural joinery puff up their bolts. Meanwhile, lights are on inside the building, punctuating its façade and illuminating the narrative adventures of its inner spatial machinations. Sure, Photoshop has a role here, but Massery seems to know, lighting from within and without, that dusky moment when the building looks its best.

When the subject is the Civic Arena, that question first takes on a delightful architectural tone. Did the building look its best when its stainless steel radiated the metallic timelessness of a cloudy day made structural? Or when a skyscraper-top view made it seem as like an interplanetary stepchild of Pittsburgh's otherwise-rectilinear architecture? Shooting in both color and black-and-white, Massery catches in the wild the very clouds that Constable conjured in oil.

And yet the architectural morbidity that we all foresee zooms in swiftly enough. Last year's systematic flaying of the building could not have revealed a fleshier red color beneath. Nor could the hapless induced collapse of structure and skin been more viscerally zoomorphic in its silent screech of death.  Those bits of stainless steel that were salvaged and hawked as souvenirs might just as easily be ivory.

Still, here is a certain magic of architectural photography. Some buildings live more substantively in architectural photography than they ever do in life. Most of the buildings of Chicago's famed 1893 World's Columbian Exposition stood little more than a year before succumbing to an unplanned fire that materially underscored the Fair's planned temporary status. A similar phenomenon occurred at the other end of the spectrum of architectural styles. Mies van der Rohe's Barcelona Pavilion, the German Modernist star of the 1929 World's Fair, originally stood for less than a year before being ripped down. But both structures lived on as influential examples in architecture books without the benefit of corporal reality.

Other fascinating examples are those, like the Civic Arena here, best remembered in their moment of destruction. The Pruitt-Igoe housing complex lives on as the portrait of the moment of explosive collapse, as if such a vivid indictment might be contagious among all examples of inferior Modern architecture. Similarly, the Tacoma Narrows Bridge twisted itself into a destructive immortality in a way that Chubby Checker could only admire. The video is a YouTube classic, and the stills live on as well.

Such images persist because they have specific didactic lessons for architectural history: Build like this, don't build like that. Massery is certainly more than sufficiently skilled as a photographer for his iconic images to take hold. But the message is not yet clear.

Build more like the Civic Arena? That's not it either. We've lost the sense of permanently engineered utopia, even as we've gained an improving sense of urbanism.

Tear down things like the Civic Arena? That's not it. There's still plenty of mid-century Modernism to appreciate and save, even if some of it is flawed.

Try to see ambitious works of architecture through the eyes of very talented photographers? Actually, now might be just the right moment for such a lesson. But hurry, because this exhibition is only up for another month.