If we can salvage the Convention Center, why not historic treasures? | Features | Pittsburgh | Pittsburgh City Paper

If we can salvage the Convention Center, why not historic treasures?

Architect of the New York's spired and inspired Woolworth Building, Cass Gilbert was also a pragmatist who described the skyscraper as a "machine for making the land pay." Sure, he gave us iconic architecture, but that structure stands to this day because it is still functional and still profitable. It just makes good sense to keep using it.

Which brings us to the David L. Lawrence Convention Center. That building stands today because ... oh, wait a minute. Most of it stands. To the delight of headline-writers and finger-pointers much further afield than Pittsburgh, a well-publicized 60-foot slab of concrete collapsed into the water feature on Feb. 5. A sizable truck was stuck in the resulting breach and the phrase "dangling cherry-picker" finally edged its way into polite conversation.

You wanted to thank the Lord that no one was killed, but sadly, that had already happened during the Center's construction in 2002, when a huge truss collapsed because of, according to reports, bolts installed incorrectly. The building's construction was variously troubled. There were problems with shifting caissons during foundation work as well. And in recent days, accounts have emerged of a previously unreported beam slipping during construction in 2005. Numerous officials are calling for further investigations.

Meanwhile, you really want to believe that the building is going to be fine. And the process of bringing in objective engineers, not previously associated with the project, to identify problems and oversee repairs is the only sensible course. Wist, Janney and Elstner Associates of Cleveland are, at the time of this writing, at work on fast-track repairs to add steel seats to numerous steel beams throughout the Convention Center to provide additional support. According to published reports, these additions should fix, and prevent further occurrence of, a defective expansion joint's failure in cold weather, which is the widely cited cause of the collapse. "They're telling us what to do so we can be confident in reopening this building," Dan Onorato told The Associated Press.

And why do we need to reopen the building? Heck, the North Shore casino just got delayed. And the new Penguins arena may never get built. But the Convention Center has events scheduled. And if they were rescheduled for another venue, or worse, another city, it would be costly to Pittsburgh, as all of those tourist dollars evaporated. It would be embarrassing, too. As much as it is a revenue-generator, the Convention Center is also a symbol of our civic resurgence, our history of technological and cultural achievement, our artistic aspirations. We simply can't allow it to crumble before our eyes.

Why is it, then, that we are so cavalier about the collapse of other functionally and symbolically important structures? Eddie's Restaurant, at Wylie and Kirkpatrick streets in the Hill, fell to willful destruction by the URA last November, despite some valiant efforts to save it. The eatery had been a favorite spot of August Wilson's and the model for the diner in his play Two Trains Running, as Pitt history professor and preservation advocate Laurence Glasco points out. Surely the structure could have played a pivotal, symbolic and money-making role in preserving the playwright's legacy and reviving his beloved Hill District.

Meanwhile, the New Granada Theater, another potential focal point for cultural redevelopment of the Hill, literally crumbles. It has had numerous partisans advocating rehabilitation as a cultural and performing-arts center. But where are the alarmed public officials concerned about its precarious state? Where is the rapid-response team of engineers and design professionals? Where is the plan that will allow it to open as soon as possible?

It would be easy to say that the landmarks of the Hill are long since dilapidated and unused or underused, that they are not financially or functionally practical. But is the Convention Center? It's the result of enormous subsidies, and it's the source of enormous troubles. Maybe we should just quit while we're behind and tear it down. We tore down Three Rivers Stadium before it was paid for. Maybe we should just speed up that cycle a bit.

Would that be absurd and wasteful? Well, so is allowing the remaining landmarks of the Hill to disappear. And so is tearing down any historical building with life, memory and symbolism left in it.

Cass Gilbert's words and structures survive in memory and reality because he valued both symbolism and economics. When one failed him, he could fall back on the other. 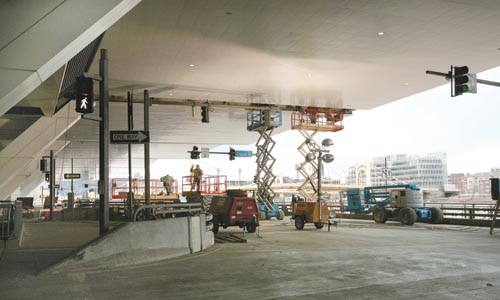 Bracing itself: repairs to the David L. Lawrence Convention Center, in progress.<