ID Labs Studios prepares to move across the river

"We've been fighting with what we have to deal with here in terms of the size and layout of the place for so long, that it's just gonna be a big relief for us to move."

"I showed up here eight years ago and built a mic booth in the back room," says producer E. Dan, looking around his ID Labs Studios in Lawrenceville. "That's the extent to which we went for studio construction."

Inside, you'll find walls lined with thousands of records, or covered with album artwork and press coverage of some of Pittsburgh's most prominent hip-hop artists. Framed albums by music legends ranging from rocker Jimi Hendrix and hip-hop producer Pete Rock to Afrobeat innovator Fela Kuti and jazz organist Brother Jack McDuff serve as inspiration for the artists who make their way into ID Labs. There's also artwork by local artists, and a trophy on the shelf.

Continuing to the back room, where music production and recording commences, one will find several keyboards, a microphone booth, a mixing board, computer screens and an Akai MPC 2000XL drum-sampling machine.

For E. Dan, all this is no longer enough: The demand for ID Labs studio time has skyrocketed with the success of Pittsburgh hip-hop stars Wiz Khalifa and Mac Miller, both of whom have recorded much of their music with Dan and his ID Labs team. So they're in the midst of a transition to a new space across the river in Etna.

"We've been fighting with what we have to deal with here in terms of the size and layout of the place for so long, that it's just gonna be a big relief for us to move," says Dan. "Having a place with different rooms where different things can be going on without interfering with each other has been something we've needed for years now, and really need now. I think that stuff has outweighed the nostalgia of this place."

The nostalgia factor has its roots in 2004, when Dan first opened the ID Labs doors on Butler Street. It's also where his production and engineering partner Big Jerm first found work as an intern, and where Khalifa and Miller blossomed, recording several albums and mixtapes. The production team was involved in both Khalifa's breakout Rolling Papers album and Miller's Blue Slide Park.

"To be in the middle of something that we knew was taking off, and just about all of those records we made from scratch with all of us involved ... it was just a really fun and creative time," says Dan.

Having produced and engineered for hundreds of local hip-hop artists, the ID Labs crew has come to recognize several qualities that have separated Khalifa and Miller from the pack.

"Those guys just come up with a plan in their heads and go for it, they don't question it," he explains. "What I see with a lot of people is that they're really unsure about what they should do. Like, ‘Should I be doing this type of song or that type of song?' or ‘Should I be acting this way or that way?' [Khalifa and Miller] never did that."

"Wiz was talking about Kush & OJ nine months before he did it," adds Jerm, who has become one of the primary producers and engineers. "Kush & OJ was gonna be the cool, laid-back shit and Cabin Fever was gonna be the street, harder shit. And he had that in his head since like '09."

"There was never a time in the studio for me with them that I felt like they didn't know where they wanted to go with something," Dan continues. "Those two being the only two artists I've seen from inception to success, I can't say if it's like that for everybody. But it's definitely something that's distinguished them."

ID Labs' involvement in the careers of Khalifa and Miller has attracted many local and national artists to the studio. Additional credits to their services include work with Maroon 5, Snoop Dogg, Rick Ross and De La Soul.

Dan acknowledges that Khalifa and Miller remain a priority, and ID Labs takes on much more responsibility than the production of a song or two.

"We try to play our role and do whatever they need at the time" says Dan. "When we're working on a project with them and for them, it's not about how it's gonna get us on as producers as much as it's like, ‘How are we gonna make this a great album?'

"When necessary, we'll jump on other peoples' songs to make them better. We're doing engineering and mixing on other songs, and helping them put the album together as a whole. For us, it's about the entire project coming together the way we want it to. We're not just guys that make beats for them every once in a while; I feel like we're a way bigger part of their sound and their entire creative world."

As the new studio in Etna opens in the coming months, the current location in Lawrenceville will remain open, at least for a time. But Dan plans on bringing the ID Labs' vibe across the river to the new space.

"This is more than just a recording studio; it's our home as producers, and it's sort of our little creative hub. And that's gonna carry over. I feel like new history will be made over there, in theory, and [the new studio will] have its own legacy in time."

ID Labs can be found online at www.idlabsmusic.com. 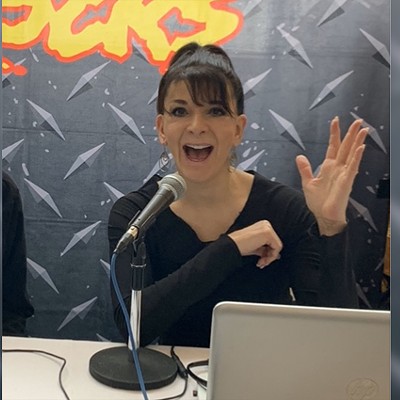