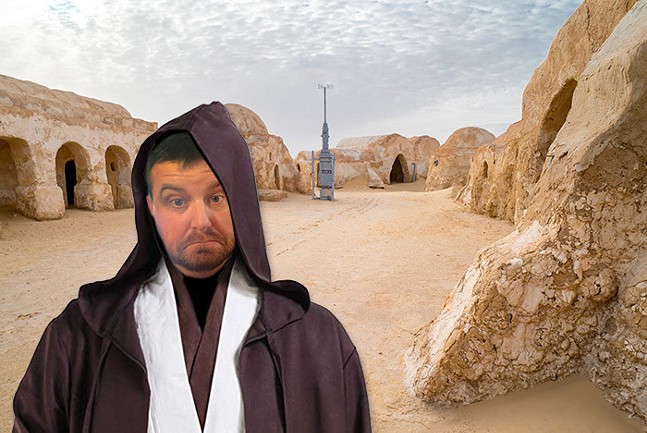 I don’t like Star Wars. There, I said it. Most of my friends know this, because I use my opinion as both as a source of pride, having escaped sheepish consumerism, and as a way to be super annoying in a group of people; two of my most charming characteristics.

I was texting with a friend recently in an anti-Star Wars safe zone, and he compared the franchise to Primanti Bros., as hugely overrated. The last time I ate at Primanti’s, I had to use half a bottle of Frank’s RedHot to taste anything. It seems like a violation to ingest a day’s worth of calories from a hot sauce sandwich. (He also compared the movies to The Clarks, but my kids don’t have any Scott Blasey figurines, so that was less helpful.)

The worst thing about my lack of jedi enthusiasm is that I actually want to like the movies. I’m not a monster contrarian, trying to rankle the masses.

In high school, most of my friends liked Star Wars, so I stood in line overnight outside of the South Hills Village Carmike Cinema for tickets to The Phantom Menace. Well, “wesa” all know how that turned out.

I have a 6-yr-old son who has researched and explained what the colors of the lightsabers mean to me at least ten times, and I love that he loves Star Wars. And I enjoy that all of you probably like it, too. Honestly.

And I tried to get myself excited for Star Wars: Galaxy Edge at Disney world but ended up being way more impressed by the 30-year-old Raiders of the Lost Ark reenactment. It’s not like I haven’t tried, people!

But I’m not going to take all the blame. For as much as I’ve grown as a person, I am not beyond pointing fingers at willful negligence. And Star Wars has plenty of that scattered throughout its nine movies.

The Phantom Menace would have had George Lucas rolling over in his grave if he were dead and not solely responsible for that film’s crimes against humanity. I’m not going to bash Jake Lloyd’s portrayal of Anakin Skywalker; he was just a kid. Though, Tatum O’Neal was only 10 when she won best supporting actress for Paper Moon, so why does LLoyd get a free pass? Jar Jar Binks makes me uncomfortable, and somehow Lucas manages to make Ewan McGregor’s performance as Obi-Wan stilted. (And why is his first name hyphenated?)

There are nine Star Wars movies. This franchise could have been condensed into a C+, two-and-a-half-hour feature. OK. That’s hyperbolic. But 90% of the movies are too long. Remember that scene in Attack of the Clones where Obi-Wan visits the Kaminoan Cloners? No. You don’t, because beyond showcasing another one of Lucas’ signature long-featured aliens (this time, necks), nothing happens. I know: “Yadda yadda, Jango and Boba Fett.”

I definitely enjoyed The Force Awakens and The Last Jedi. But in the era of prestige TV, where almost all visual media is highly polished and purported to be well-written, it seems more like a byproduct of the current theatrical quality and less of standalone genius.

I think a lot of my lack of enthusiasm for the franchise comes from not being a Star Wars kid. So, like with every other one of my problems, I blame my parents. I wasn’t raised on Luke and Leia the way a lot of ’80s kids were. I had this Ewok treehouse toy as a kid, but I don’t know why, as I remember having no knowledge of what it represented. Life is strange like that, I guess.

A definitive ranking of Star Wars movies by a non-fan who hasn’t seen the final film yet:

9. Attack of the Clones. You don’t know which clones are fighting for the republic either, do you?
8. Return of the Jedi. Trees, and speeders, and objectification, “Oh, my!”
7. The Rise of Skywalker. Haven’t seen it. Heard it’s reaaalll bad.
6. The Phantom Menace. This came out in 1999, and I saw it on opening night. I just discovered Palpatine is “the phantom menace.” I’m pretty dumb, though.
5. New Hope. This is the film that started it all! So, it goes here?
4. Revenge of the Sith. This episode does the best at detailing the family/good and evil tree of the foundational mythology.
3. The Force Awakens. I don’t remember much about this film. But I liked it and had and was sitting in an incredible, movie-theater, leather, recliner seat.
2. The Last Jedi. Mark Hamill playing a grumpy jedi ready to retire. I get it.
1. The Empire Strikes Back. I’m told people really like this one.