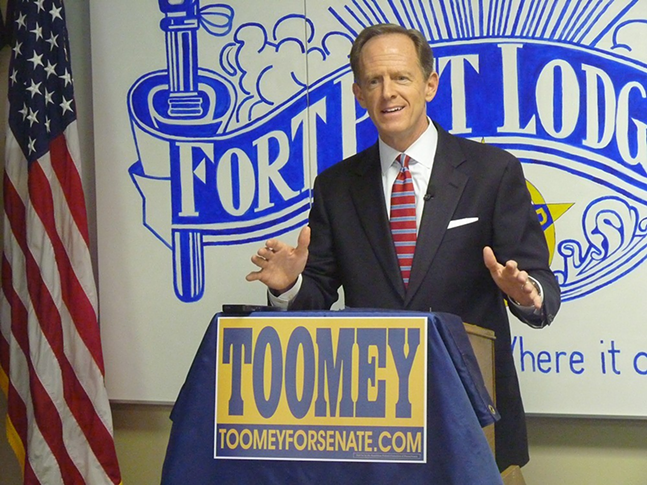 CP photo: Ryan Deto
Pat Toomey in Pittsburgh in 2016
In an interview with York, Pa.’s WPMT television station, U.S. Sen. Pat Toomey (R-Lehigh) was asked about the recent Georgia election law and how Black people and other people of color who have opposed that bill said it will make it harder for their communities to vote. Toomey then called that a “ridiculous argument” and then insisted that forms of identifications, like drivers license, are ubiquitous among everyone, including BIPOC people.

"Are we really supposed to believe African Americans and people of color don't drive in America? That they don’t get drivers’ licenses?” said Toomey to WPMT. “And even if you thought that, which I don’t. I think Black people do drive.”


📹On @FOX43, Sen. Toomey says he wants PA to adopt Georgia's new election laws. I ask what he says to BPOC who say those policies make it harder to vote? He said it's a "ridiculous argument."

"Are we really supposed to believe African Americans and POC don't drive in America?" pic.twitter.com/npE8Kg7PSH

Americans of all backgrounds do, of course, drive. But there are also millions of Americans who don’t drive, or even have access to a vehicle, and those Americans are disproportionately BIPOC.

In Pennsylvania, 11% of households don’t have access to a vehicle, and in big cities in the commonwealth, those car-less households are even higher. In Pittsburgh, low-income people are actually becoming increasingly reliant on public transit, and Black Pittsburghers have increased their walk to work rates significantly over the years.

Even in Allentown, where Toomey used to serve on the city’s Government Study Commission, 19% of households are without access to a vehicle. Allentown is 52% Latino and about 14% Black.

Toomey went on to praise the Georgia election law and said it provides for a free government issued identification card to be used in voting. He defended these as “election integrity” measures, and encouraged Pennsylvania state legislators to create a similar law,

Pennsylvania passed a Voter ID law in 2012, which some Republicans admitted was to help Republican candidates win. The law was struck down by the state Supreme Court in 2014 as unconstitutional and overly onerous on people wanting to vote.

Toomey is retiring at the end of his term in 2022, and has said he will not seek election in other offices.