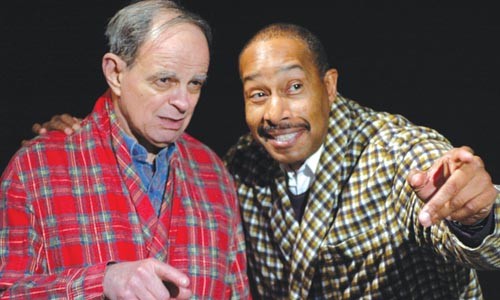 Seasoned citizens: Bob Roberts and Kevin Brown in I Nipoti, at Pittsburgh Playwrights.

In his ongoing Culture Clash series, local playwright Mark Clayton Southers has been examining the implications of "identity" -- both the fellowship it offers and the limitations it imposes. In each of three plays (so far), Southers creates dramaturgical worlds in which some bit of African-American culture rubs shoulders with some other culture. In his latest, I Nipoti, a family of Italian-Americans finds itself thrown into the melting pot.

Tano Paoletti discovers he has cancer, leaves his native Italy and comes to say goodbye to his American relatives, including Tony and Nico, two cousins running a pizza shop. As the play opens, Tano (Bob Roberts) has collapsed and wound up in a nursing home in the bed next to Obadiah Fields, an irascible African American who, over the course of the play, teaches Tony and Nico a thing or two about the world.

For almost the entire first act, I Nipoti is, more or less, a situation comedy -- the characters are broadly, if lovingly, drawn and the plot becomes a frantic drive to learn the spices Tano uses in his "family secret" sauce.

None of which is bad, by the way. Southers is a funny writer with a bright and breezy style that keeps the comedy bubbling away like a big pot of marinara. (I can't believe I just wrote that.)

It also helps that the Pittsburgh Playwrights production is a solid, sturdy affair. Director Wali Jamal and cast find the laughs without being too shticky, and play with a fast-paced and honest drive. Kevin Brown, as Fields, is the perfect mixture of subtle and outrageous humor; this play is never more interesting than when Brown has a joke in his sights and is bearing down on it.

Mark A. Calla and Tony Bingham, as the American cousins, have more of the dramatic heavy lifting and carry off their tasks with tremendous skill; Calla avoids easy stereotype and Bingham's journey is consistently plausible.

The second act, however, isn't nearly as successful. With extended and repetitive monologues, as well as scenes of outright preaching, Southers halts a play fueled by subtext to openly voice that subtext. Besides being unnecessary, it contradicts the theatrical smarts Southers has already demonstrated.

Coming in at just under three hours, I Nipoti could use a bit of pruning and I would suggest that Southers could start there.