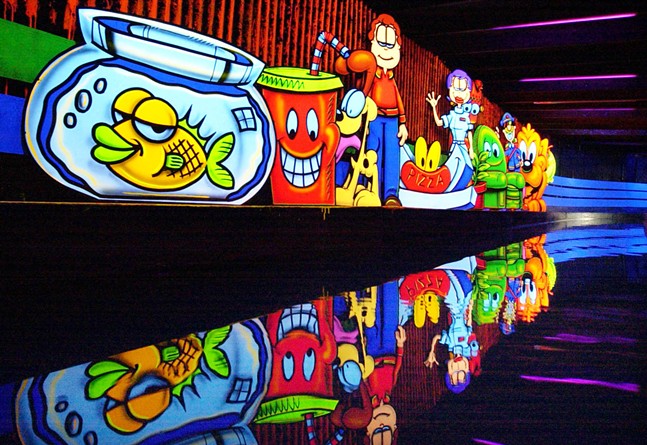 The ride, which first opened as the Old Mill in 1901, will reclaim its original name and a Western theme similar to the one it had in the '70s.

Many Kennywood fans rejoiced at the news. In a video posted to Kennywood's Facebook page announcing the change, spokesperson Nick Paradise said: "We're going to be bringing back the old mill as so many of you have requested." Indeed, there have been passionate Reddit threads and Facebook comments for years begging for a makeover of the ride. It had two stars on Yelp.

The Garfield theme came to be in 2004, bearing the same name as Garfield's Nightmare, a Nintendo DS game where the titular cat eats so much pizza, lasagna, and donuts that he has terrifying nightmares. The ride itself was bright, garish, and an assault on the senses. It was beautiful.
click to enlarge

Photo courtesy of Kennywood
Garfield's Nightmare
The structure of the ride is a tunneled canal that riders enter via boat. It's a gentle ride, perfect for amusement park goers who are scared of heights and speed. The Garfield theme required wearing 3D glasses to enhance the nightmarish aspects (3D glasses from 2004, which are a whole other breed from what you'd wear to watch an Avengers movie in 3D). Its color palette was filled with harsh neon and fluorescent colors: bright green boxes of lasagna dancing in top hats, Garfield sleeping in a bright blue pizza box, purple mice eating a boiling green cauldron of "cat stew."

The ride was an anomaly, as most Kennywood rides aren't branded with licensed characters, or named after a recent blockbuster or video game. At one point, Garfield's Nightmare was a new, modern ride, but that time has long since passed, and it morphed into a kitschy pop culture relic. Garfield himself, though, is only increasing in relevancy. Now, more than ever, we had Mondays and crave pasta.

If you're looking to say one last goodbye, it's already too late. The video showed the Garfield's Nightmare decor being removed via crane. Per a licensing agreement, Paradise says that all the Garfield imagery "has been or will be destroyed."