I Am A Haunted House uses dance, new media, and a Hollywood legend to re-examine the past | Dance | Pittsburgh | Pittsburgh City Paper 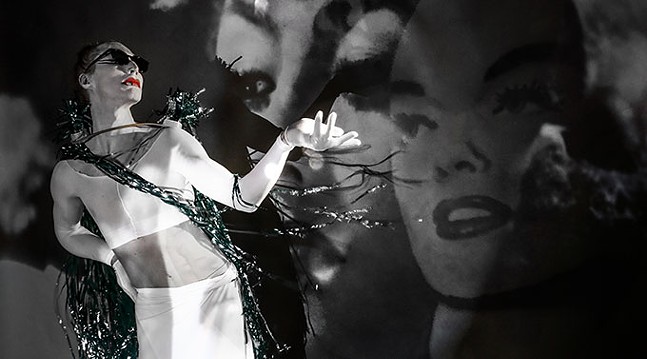 Scott Andrew
Jesse Factor in I Am A Haunted House

In the annals of camp, there are few moments more iconic than the infamous wire hangers scene from Mommie Dearest, the 1981 biopic based on the bestselling tell-all book about Joan Crawford. It’s a moment so connected with the late Hollywood star that local multimedia artist, Scott Andrew, says most people don’t think of her at all beyond that.

Andrew and dance artist Jesse Factor are exploring that idea with I Am A Haunted House, a collaborative piece that combines movement with found footage and audio of Crawford as a way to reconsider the past. The duo will present this, their first-ever project together, on Fri., March 6, as part of their Freshworks residency at Kelly Strayhorn Theater’s Alloy Studios.

“It really is about how an iconic figure haunts our psyche,” says Andrew, an active member of the Pittsburgh arts community who, among other things, co-curates the annual LGBTQIA variety performance series TQ Live! at the Andy Warhol Museum.

He adds that he and Factor were interested in “reconstituting some version of Joan Crawford or many different versions of how she’s been represented throughout time.”

Factor agrees that they were both fascinated by how Mommie Dearest has defined Crawford. Besides being a major film and television star, she helped popularize Pepsi-Cola, for which she served as a board member and spokesperson following the death of her husband, who led the company as CEO and president.

Scott Andrew
Jesse Factor in I Am A Haunted House

“The actual person has been eclipsed by this singular scene in this film, and so I was really interested in that,” says Factor.

Factor says they started with the idea of a shadow or silhouette in conversation with a live body, which would be performed to a looped interview that Crawford gave at the end of her life.

To convey this, Scott made projections using Crawford-related imagery to create an atmosphere around Factor as he moves on stage. This is complemented by music from Andy Hasenpflug, as well as music collaborators Angela Washko and Jesse Stiles. Andrew says Washko and Stiles were invited to use their method of running audio through digital processing to create lyrics with found dialogue from Crawford.

Factor says the music deals “a lot with repetition and remix and glitching, as if some of this material were perhaps downloaded incorrectly.”

In terms of dance style, Factor recalled his time as a performer with the Martha Graham Dance Company. Because he sees the two women as contemporaries — both becoming huge influences in their respective fields around the same time — he wanted to treat Graham with a similar approach as with Crawford by “riffing” on her physicality for his own “fantastical purposes.”

But, as is the case with Freshworks, I Am A Haunted House is still a work in progress. Andrew hopes that the upcoming show, along with a following workshop, will encourage outside forces to help him and Factor fully bring their vision to life.

“[We’re] hoping it will stimulate interesting conversations that will help us to inform how we work with the project and maybe even find community members who are interested in engaging in other ways,” says Andrew.