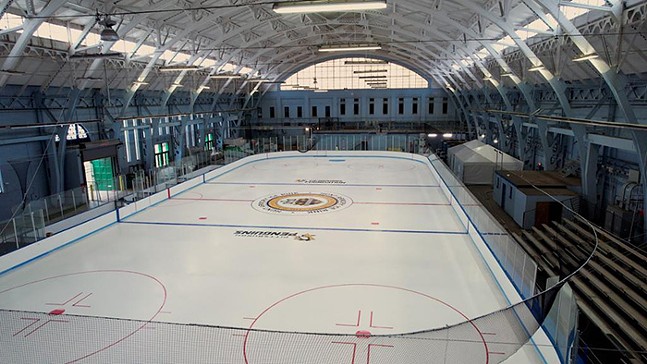 Photo: Courtesy Pittsburgh Penguins
The ice rink inside the Hunt Armory
Created in 1916, the Hunt Armory in Pittsburgh's Shadyside neighborhood served mainly as a training and shortage center during its long history, and it was once the site for speeches by former U.S. Presidents Harry Truman and Dwight Eisenhower. But what was originally a storehouse for weapons and ammunition is now becoming an ice rink and will open this week on Nov. 26

The historic Hunt Armory will be turned into a seasonal ice rink funded by the Pittsburgh Penguins. The 46,500 square foot armory will be transformed into an ice rink that features dashboard and glass installation, ice design, seating, tenting for locker rooms, and establishing utility services.

The city’s Urban Redevelopment Authority, the Pittsburgh Penguins, and Pittsburgh Mayor Bill Peduto gathered on Nov. 22 for the ribbon-cutting for the rink.

The rink will be open to the public every day from Nov. 26 through March 1. Tickets must be purchased in advance and public skating time is limited.

“Finally, this longtime gem of the Shadyside community is being opened up for all the city to enjoy, through the great game of hockey,” Peduto said in a press release. “I can’t wait to put my skates on and join in.”

In 2019, the URA purchased the Hunt Armory, hoping to preserve the historic nature of the building while also hoping to turn it into something that will benefit the community. They are glad to see what the Penguins Foundation turned the former armory into.

"We’ve waited years to see the Hunt Armory become animated again, and I can’t think of a better way to do so than with a community gathering space like this,” said Pittsburgh City Councilor Erika Strassburger, who represents the neighborhood. “This rink and the Penguins’ programming will provide an excellent opportunity to welcome children and families from across the city to Shadyside and to build bridges to other communities.”

The Penguins Foundation will additionally host free regularly-scheduled community skating opportunities for youth and community groups throughout the region. Public skates will be from 7-9 p.m. Fridays; from 2-4 p.m. and from 7-9 p.m. Saturdays; and 2-4 p.m. Sundays. Tickets must be purchased in advanced and cost $7. Skate rental is available for $3 fee.