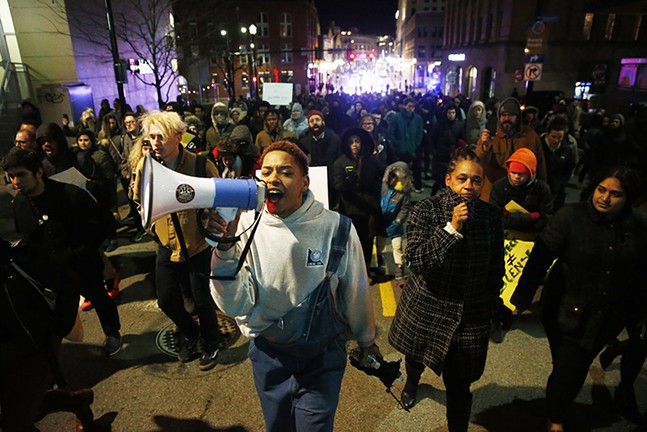 CP photo: Jared Wickerham
Christian Carter leads the protesters through East Liberty
After a four day trial, it took less than four hours for the jury to come to a verdict in the trial of Michael Rosfeld, the former East Pittsburgh police officer who shot unarmed teenager Antwon Rose II in the back last year. The jury had different options to convict Rosfeld, ranging from the most serious (1st degree murder) to the least serious (involuntary manslaughter). Ultimately, the jury choose to acquit Rosfeld, meaning he was deemed not guilty of all charges.

Following the decision at around 9:15 p.m. on Friday, Pittsburghers took to the streets.

First, dozens gathered outside of the Allegheny County Courthouse in Downtown. Protesters shouted “no justice, no peace” as the crowd inside the courthouse filtered into the street.

On June 19, 2018, Rosfeld pulled over a car that was reportedly involved in drive-by shooting earlier that evening in North Braddock. Rose and another man then exited the car and ran away from Rosfeld and the other East Pittsburgh police officer. Rosfeld then shot at Rose, hitting him three times. Rose was unarmed, but it was later discovered that firearms were found in the back seat of the car he was riding in. The other man, Zaijuan Hester, testified that he used the weapons earlier, and said that Rose had not.

The Downtown gathering didn’t last long, and eventually the protesters migrated to the Target store in East Liberty. At 10:30 p.m. what appeared to be a similar crowd to the Downtown protesters started occupying the intersection of Penn and Centre avenues.


The protesters chanted, “What was his name? Antwon Rose the second” and “Who did this? The police did this.” Christian Carter, an 18-year-old from East Liberty, led many of the chants. He often read out the words of a poem Rose wrote about being Black in Pittsburgh. “I am confused and afraid,” shouted Carter as the the crowd repeated him. “I see mothers bury their sons. I want my mom to never feel that pain.”

The gathering was a mix of anger and sorrow. At times protesters would exclaim in frustration; at other times, everyone was silent and a few people could be seen sobbing.


Summer Lee tells the press that we need juries to understand that police officers make mistakes too, they are human beings, and sometimes their mistakes lead to people being killed. pic.twitter.com/mDKMLgthvM

The crowd grew as it began to march down Penn Avenue toward the heart of East Liberty. What started as about 50 people eventually grew to about 400 as the night progressed. Local politicians like Pittsburgh City Councilor Daniel Lavelle (D-Hill District) and State Reps. Ed Gainey (D-East Liberty) and Summer Lee (D-Swissvale) joined the marchers. 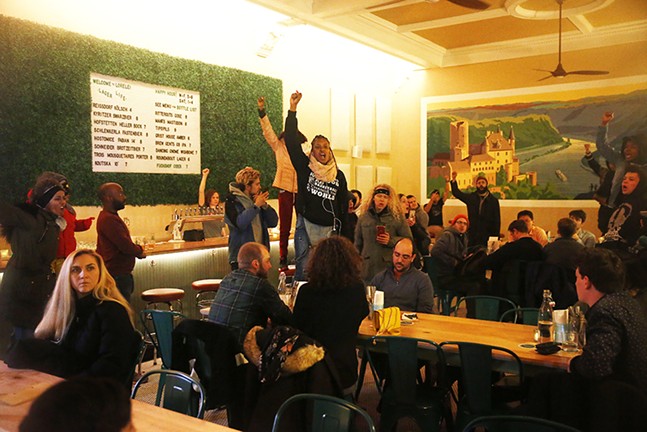 CP photo: Jared Wickerham
Protesters occupied Lorelei bar in East Liberty.
Eventually some of the marchers began to enter private establishments as a way to comment on the gentrification that was happening in Black Pittsburgh neighborhoods like East Liberty. Over the last several years, many Black people have migrated outside of the city as their longtime neighborhoods have experienced rising rents. Suburbs like East Pittsburgh and Rankin, where Rose lived, have seen an influx of Black residents thanks in part to gentrification.

As the protesters entered the Ace Hotel on Whitfield Street, one protester shouted, “This is part of the gentrification, this used to be the YMCA.” Inside the hotel, the crowd chanted, and some bar patrons even joined in the chants.


Some bar patrons are joining in the chants and protests pic.twitter.com/vd289bnkG8

Some protesters eventually attempted to enter Urban Tap on Highland Avenue in neighboring Shadyside, but security had locked the doors, even though patrons were still inside. Every location protesters entered was a relatively new establishment, a symbol of gentrification to the crowd.


After marching through the streets again. Protestors enter Lorelei bar. They appear to be aiming to disrupt the symbols of gentrification. These 3 locations are recent additions to the neighborhood pic.twitter.com/xY74DJwZvz

The protest then turned political, as Brandi Fisher of the Alliance for Police Accountability spoke about Allegheny County District Attorney Stephen Zappala. Fisher called for Zappala’s dismissal and the crowd chanted in agreement. Zappala is up for re-election in May.

Zappala issued this comment following the verdict: “While I respectfully disagree with [the jury’s] verdict, it is the people of this commonwealth who decide guilty or not guilty and they have spoken on this matter. In the interest of justice, we must continue to do our job of bringing charges in situations where charges are appropriate, regardless of the role an individual holds in the community.” 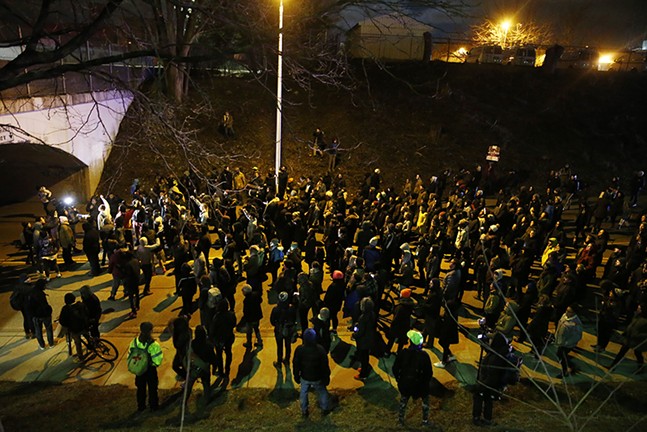 CP photo: Jared Wickerham
The crowd in East Liberty swelled to about 400.
The crowd also called for criminal justice reforms. “You can’t say what happened was just,” said Fisher. “We have to change the law.”

The crowd marched back into East Liberty and then over to Mount Ararat Baptist Church in neighboring Larimer, one of the largest Black churches in the region. The Pittsburgh Police escorted the large crowd throughout the night, and no major incidents occurred.

Another gathering is planned for 2 p.m. today at Freedom Corner in the Hill District.