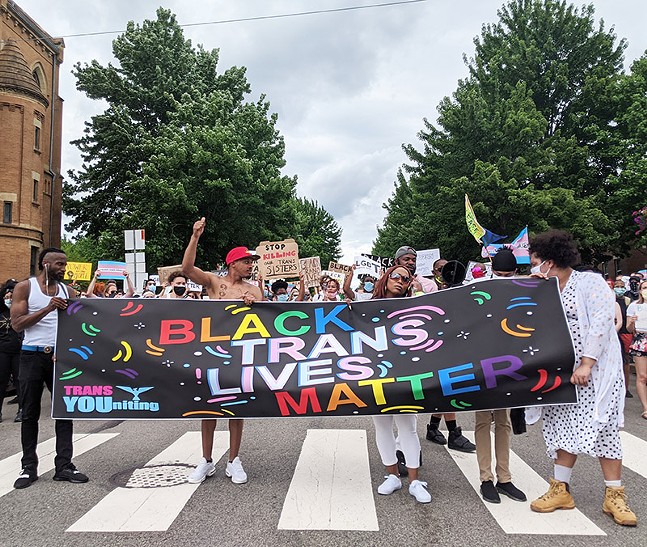 The group, comprising of several hundred people, marched from Freedom Corner in the Hill District to Downtown Pittsburgh along Centre Avenue and Grant Street before stopping at the steps of the City-County building. The event was organized by Pittsburgh trans advocacy and education group Trans YOUniting along with 1Hood Media.

In the wake of the Trump administration’s rollback of health-care protections for transgender individuals, organizers specifically called for equal access to health care, asking allies to contact providers like UPMC and Highmark as well as state government officials and ask them to ensure that trans health care is covered, and to set up state protections.

Activists from both Pittsburgh and out of town spoke at the march. Before the event, Trans YOUniting created a travel stipend fund to assist marchers in getting to the event. Throughout the demonstration, the organization collected donations through CashApp, and encouraged attendees to donate to support Black trans people.


Stopped at intersection of Grant and Fifth, singing “What side are you on?” pic.twitter.com/PEUd20GugN

The march focused particularly on honoring Aaliyah Johnson, a Black trans woman who was found dead on the 500 block of Sinclair Street outside of the Midtown Towers apartments in McKeesport last month, but brought up other names of Black trans women with suspicious deaths, including TeTe Gulley in Portland, Oregon, and Dominique "Rem'mie" Fells in Philadelphia.

Thomas Hudson from Tulsa, Okla. led the crowd in a moment of silence to honor Black lives and Black trans lives lost. They pointed out the importance of focusing on specific vulnerable subsets of the Black population — poor, incarcerated, trans, nonbinary, HIV positive — in their calls to action.

“We cannot continue to pick and choose which Black lives matter,” they said.

Hudson emphasized, along with multiple other organizers, that donating and posting on social media is not enough. Speakers encouraged allies to stand up for Black lives and Black trans lives in uncomfortable spaces, even when no people of color are present.


“Every time you go home for thanksgiving break and you break bread with family members who vote against the interests of people here, you are saying violence is okay.” -Miracle with @1hood pic.twitter.com/q1xVZKmXe5