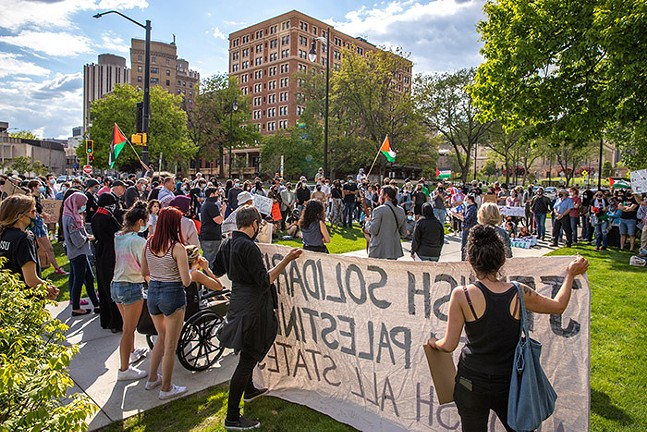 CP photo: Kaycee Orwig
Hundreds gather for a Stand in Solidarity with Palestine protest outside the Cathedral of Learning in Oakland on Fri., May 14, 2021.
About 250 people gathered at the corner of Forbes Avenue and Bigelow Boulevard in Oakland Fri., May 14, for a Stand in Solidarity with Palestine protest in response to the escalated Israeli militarized violence against Palestinians. This includes the Israeli police recently raiding Al-Aqsa Mosque during the holy month of Ramadan and the forced displacement of Palestinians in Sheikh Jarrah, a predominantly Palestinian neighborhood in East Jerusalem.

The Israeli military has forcibly displaced and destroyed the homes of millions of Palestinians, and in recent days Israeli air and ground attacks have killed more than 100 civilians and wounded more than 1,000 in Gaza, which has been under blockade since 2007. Hamas, a Palestinian nationalist group and the de facto government of Gaza, in response to the Al-Aqsa Mosque raid, fired rockets towards Israel, some of them striking Israel and killing 11 people, injuring more than 500. 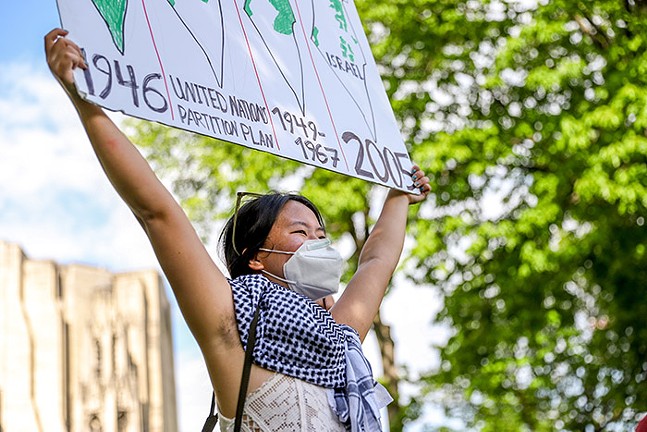 CP photo: Kaycee Orwig
A demonstrator holds up a sign at the Stand in Solidarity with Palestine protest.
The Pittsburgh demonstration, organized by the Pittsburgh chapter of Council On American Islamic Relations — along with the Thomas Merton Center, Trans YOUniting, the Pittsburgh chapter of Jewish Voice for Peace, and Pittsburgh DSA — aimed to raise awareness of Israel’s settler colonialism and violence against Palestinians, as well as encourage people to contact their elected officials to demand an end to U.S. funding given to the Israeli military.

“People should be able to worship without being tear-gassed. Children should be able to live out their lives without being scared of being imprisoned or shot. Hospitals should not be bombed,” says Christine Mohamed, executive director of the Pittsburgh chapter Council on American-Islamic Relations. “We want to see real change happen. We want America to step up and not allow these violations to continue and to actually put changes in effect and get real laws made.”

A little after 4 p.m., Mohamed told attendees not to engage with the pro-Israeli counter-protesters in Schenley Plaza. She began a chant of “From the river to the sea, Palestine will be free,” before introducing the first speaker, Dani Klein from Jewish Voice for Peace, who listed the organizers’ demands, including an end of Israeli violence against Palestinians, U.S. funding for Israel’s military, and the ongoing nakba, referring to the 1948 displacement of more than 700,000 Palestinians and destruction of Palestinian homes, when the country of Israel self-established.

“We’re here to stand in solidarity with them, and we’re also demanding that Israel lift the blockade on Gaza and let Gaza live, give them access to clean water, to electricity, freedom of movement, just like every Jewish Israeli in historic Palestine has the right to do,” says Klein.

Click to View 15 slides
Israeli defense minister Benny Gantz recently said that Israel isn't planning for a ceasefire and “will not listen to moral preaching against our duty to protect the citizens of Israel,” and Israeli prime minister Benjamin Netanyahu said the Israeli military would “inflict blows on them [Hamas] that they couldn’t even dream of.”

Klein also called for the right to return for Palestinians and helped pass out stickers referring people to the “Demilitarize PGH” petition that calls for an end to training exchanges between Allegheny County and foreign countries’ armed forces, security, and police agencies.

People from a variety of faiths and backgrounds spoke, many of whom have familial roots in Palestine and have visited the region. Kate Daher, with the Pittsburgh Palestine Solidarity Committee, has been to the region three times and critiqued incomplete corporate media coverage that does not fully cover Israeli displacement of and violence against Palestinian people. Daher also emphasized that two major human rights organizations, B'Tselem and Human Rights Watch, both found that Israel’s actions constitute the crime of apartheid.

Jude Taha, a Palestinian refugee from Jordan who recently finished undergrad in Washington, Pa., also shared critiques about media, false equivalencies between Israel and Palestine, and apathetic responses in the U.S. in a poem she wrote the previous night titled, “We Must Not Watch The News.” The poem was inspired by a letter sent between her grandparents in 1967 after the Six-Day War, and it draws a line from the letter: “We must not watch the news, we must make the news.”

“When you’re watching people being uprooted from their homes and you see the reality of ethnic cleansing from dispossession of Palestinians to the murder of children, I felt inclined to write and show solidarity to my people,” says Taha, who has experienced discrimination for being Palestinian in collegiate and professional settings. She also says that unlike Israel, which other speakers noted received $3.8 billion in U.S. military funding in 2019, Palestine does not have a comparable army, centralized government, or anti-rocket technology such as Israel’s Iron Dome. 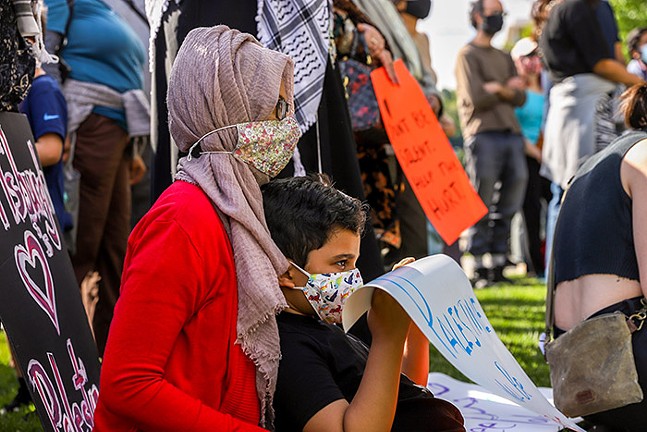 CP photo: Kaycee Orwig
Demonstrators gather for a Stand in Solidarity with Palestine protest outside the Cathedral of Learning in Oakland.
Other speakers shared personal experiences, including going through humiliating checkpoints as a Palestinian, unlearning fearmongering about Palestinians while growing up Jewish, and love for Jerusalem as a “heaven on earth” for people of a variety of faiths. A representative for the Pittsburgh chapter of BDS (Boycott, Divestment, Sanctions movement), which can be reached through Pittsburgh DSA, encouraged people to get involved.

People brought signs such as “Stop Funding Apartheid,” “Keep my seedo & tata safe,” referring to the Arabic translation for grandparents, and “End Israel Apartheid Free Palestine.” Others held larger banners with phrases such as “Resist Colonialism PGH to Palestine” and “Mourn the Dead Mend the World,” and several people brought Palestinian flags. 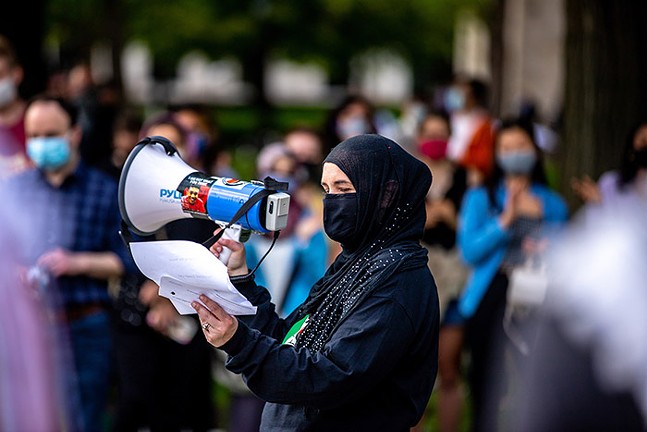 CP photo: Kaycee Orwig
Christine Mohamed gives closing remarks at the Stand in Solidarity with Palestine protest.
Edwin Everhart led singing between speakers, including variations of “This Little Light of Mine,” with verses such as “End the occupation, shut it down” and “No more apartheid, shut it down.” Shortly before the crowd dispersed around 5:30 p.m., Jacob Richards, the former president of Students for Justice in Palestine at the University of Pittsburgh, encouraged current and incoming students to get involved with the organization.

Wasi Mohamed, the former executive director of the Islamic Center of Pittsburgh, was the one of the last speakers, and he emphasized the connection between white supremacy, anti-Semitism, Islamophobia, ethnocentrism, and other systems of oppression in the U.S. and foreign policy abroad.

“If I see one group without power and one with power, and the one with power instigating it, I think that’s who’s responsible for the violence and all that ensues,” says Wasi, who, along with other speakers, emphasizes that support for Palestinians is not mutually exclusive with support for Jewish people. “No one in this gathering says anything about removing Jewish people from the entire region. What we want in the region is free Palestinian people.”