CP photo: Jared Wickerham
Hundreds gathered for a Pittsburgh Rally for Solidarity march from Flagstaff Hill to Schenley Plaza in Pittsburgh's Oakland neighborhood on Wed., March 24, 2021.
More than 400 people gathered on Flagstaff Hill in Pittsburgh’s Oakland neighborhood on Wed., March 24 for a rally in response to the recent Atlanta mass shooting, as well as the general rise in anti-Asian hate crimes in the past year.

The Rally for Solidarity was co-hosted by the East Coast Asian American Student Union and the Pittsburgh chapter of the Asian Pacific American Labor Alliance. While the shooting in Atlanta, in which a white man shot and killed eight people, including six Asian women, was one of the most recent anti-Asian attack, the organizers also emphasized that this is only the latest manifestation of the long history of anti-Asian violence in the U.S. 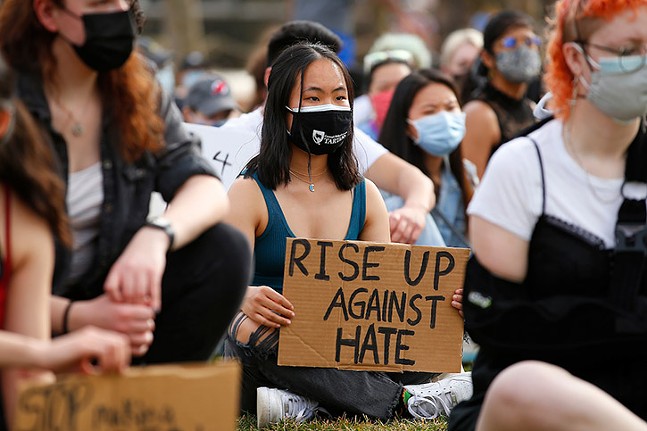 CP photo: Jared Wickerham
The Pittsburgh Rally for Solidarity march in Oakland
“We just want to emphasize the importance that this isn’t new. This has been happening for centuries,” said Vinh Dang, the director of communication of ECAASU. “And I think it’s really important to remind folks of that, to give context, and tell people that it’s important to educate yourselves, look back into the history, and find ways we can build solidarity and find solutions to this.”

Members of ECAASU in Pittsburgh reached out to APALA PGH to co-host the event, which led to Sabrina Yow-chyi Liu joining the organizing team. The team’s focus on solidarity was also reflected in the nine local organizations whose representatives spoke at the rally. Fourteen more local organizations also helped spread the word about the event.

Organizing for the rally began last Friday. The organizers chose to hold the event March 24 to coincide with one of the University of Pittburgh’s Student Self-Care Days, with the hope that it would encourage students to get involved. Many did, mostly coming from Pitt and Carnegie Mellon University’s campuses, although older community members were also present.

Gretchen Fay, who learned about the rally from her friend’s daughter, previously attended Standing Rock Indian Reservation and Black Lives Matter protests, but many attendees, who were around college age, were newer to such actions. Although this was the first rally Pitt sophomore Alyssa Khieu has attended, she hoped that it would galvanize people to continue to work together and fight for collective liberation. 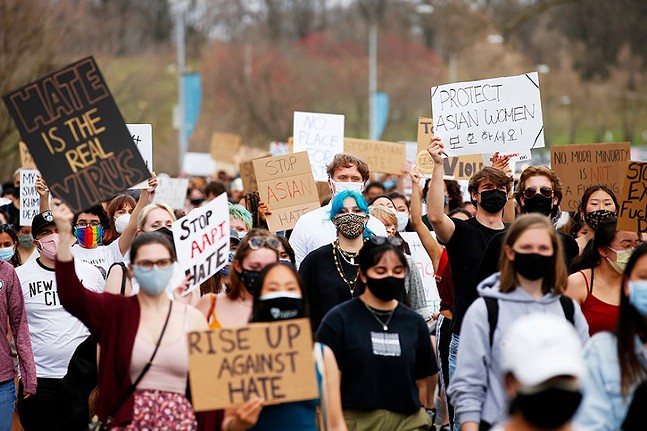 CP photo: Jared Wickerham
The Pittsburgh Rally for Solidarity march in Oakland
“It sucks that we had to get to a point where people were being killed and there were 33 people deported to actually start having this conversation and have it be recognized on such a large level,” says Khieu, referencing the 33 Vietnamese refugees deported last week. Khieu held a sign saying “My family didn’t survive the Khmer Rouge to deal with this.”

People started gathering around 3:20 p.m. on Flagstaff Hill. Some people brought their own signs, including one that read “Jews 4 Asian lives,” while others made signs with the materials available, such as “Protect Asian women” and “Defend Asian lives.”

The rally began shortly after 4 p.m. with a performance from four drummers from Pittsburgh Taiko, a group that educates community members about the traditional Japanese percussion form as well as Japanese culture. Organizers from ECAASU and APALA PGH introduced themselves and began with a land acknowledgement of the Shawnee and Osage Native American people.

Judy Suh, from APALA PGH, took the mic as the first of 14 scheduled speakers. Charity Kheshgi worked as a sign language translator for each speaker, standing beside them as they spoke. Suh spoke of her “rage at the failure of our elected officials to even try to protect us” and how “too many of them have stoked the fire of this violence.”

Charlotte Ng and Ilyas Khan from Sunrise Movement Pittsburgh, a youth movement dedicated to stopping climate change, spoke about the intersectionality of climate justice and the ways that systems of oppression, including colonialism, continue to pit us against each other. Ng also shared how Asian stereotypes are still detrimental to her understanding of her identity, such as the fetishization of Asian women and the model minority myth. 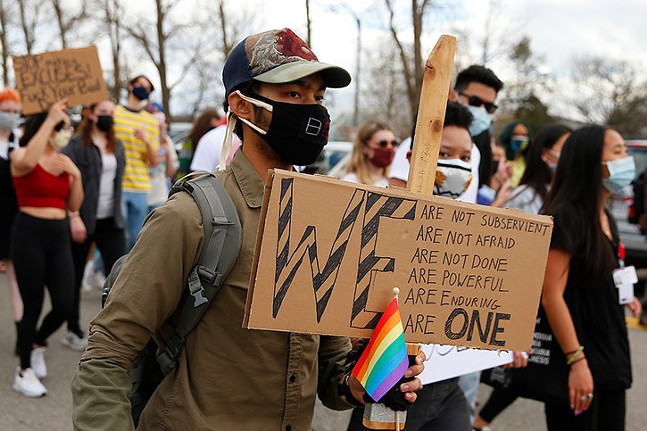 CP photo: Jared Wickerham
The Pittsburgh Rally for Solidarity march in Oakland
By the time Lena Chen took the mic to represent the Pittsburgh chapter of the Sex Workers Outreach Project, about 300 people had gathered. Chen, along with Jamie Martina, called for abolishing police departments and the decriminalization of any kind of labor people have to do to live a dignified life. Chen also invited people to an April 1 day of rest for AAPI Pittsburghers and sex workers hosted by the Pittsburgh chapter of SWOP.

“There is something revolutionary in demanding rest,” says Chen, who also spoke at Thrash the State’s Stop Asian Hate protest on Sat., March 20.

Josh Fleitman spoke for CeaseFire PA and emphasized the recent history of mass gun violence against marginalized people, including the 2018 Tree of Life shooting in Squirrel Hill. CeaseFire PA works on ground-up reforms to reduce gun violence, and Fleitman encouraged people to get involved to “make it more difficult for people with hate in their heart to get their hands on deadly weapons.” 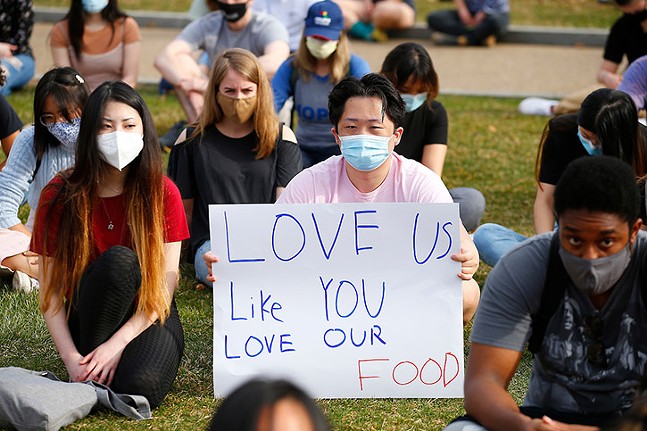 CP photo: Jared Wickerham
The Pittsburgh Rally for Solidarity march in Oakland
Kanoko Kamata represented Pittsburgh Taiko, and she shared her experiences with discrimination in Pittsburgh as well as the resilience that taiko represents. After the speeches, Dang led the crowd from Flagstaff Hill to Schenley Plaza. Bike marshals stayed in front of protestors, separating them from the several police vehicles further up Schenley Drive, as Dang led chants including “Two, four, six, eight, stop the violence, stop the hate” and “When Asian lives are under attack, what do we do? Stand up, fight back.”

The crowd reached Schenley Plaza around 4:50 p.m., where many students were picnicking and sunbathing. The more than 400 rally attendees spread out in a circle, interspersing with some of the people already there. Dang encouraged people to socially distance, which was difficult in the small space, although most attendees wore at least one mask.

Mairead McCarthy took the mic first after the eight minutes of silence. McCarthy represented Welcoming Pittsburgh, an initiative by Pittsburgh Mayor Bill Peduto to integrate immigrants, refugees, and asylum seekers, and spoke about the history of white supremacy and the need for people to commit to fighting against it. 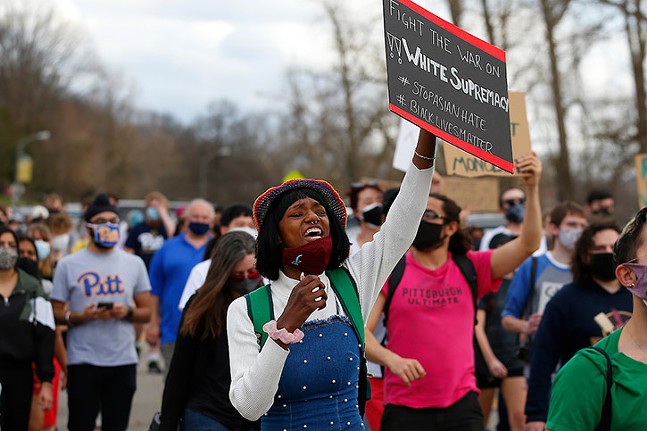 CP photo: Jared Wickerham
The Pittsburgh Rally for Solidarity march in Oakland
Although Jasmine Cho, creator of Yummyholic, could not attend, Dang played an audio recording of her talking about her earliest experience with objectification due to her intersecting identities as an Asian woman. Cho, who makes portrait cookies to highlight AAPI historical figures often left out of school curricula, emphasized how racist systems start small but new actions against white supremacy can also start small and build to something larger.

“There’s a reason we hear with new ears and see with new eyes,” said Cho’s recording. “We’re meant to evolve and be better.”

Deepshikha Sharma and Satvika Neti represented Rangoli PGH, an initiative creating community for South Asian LGBTQ+ people. They spoke about the passiveness of the slogan “Stop Asian Hate,” which they believe doesn’t make it clear that white supremacy is the root of the hate. They connected white supremacy to not just the Atlanta shooter but also to deportations and the carceral system. 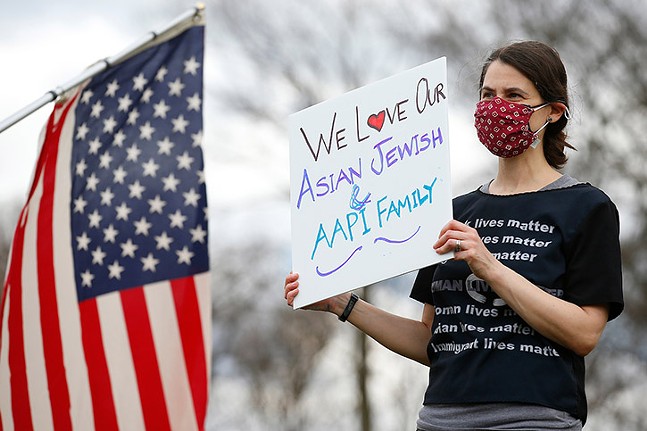 CP photo: Jared Wickerham
Elinor Nathanson holds up a sign during the Pittsburgh Rally for Solidarity march on Flagstaff Hill in Oakland on Wed., March 24.
Nicholas Anglin, the chief executive officer of Black, Young, & Educated, spoke about how he had not stood up against racist microaggressions against Asians in the past and emphasized that moving forward, people of color must work together and should not continue catering to white people’s comfort.

Itha Cao, the creator of The Hungry Cao, took the mic as the final speaker around 5:20 p.m. She shared her experience being placed in an ESL class in elementary school despite being fluent in English, which she connected to the perpetual foreigner stereotype.

“It’s never too late to act … even something so simple as saying ‘that’s not funny’ to a racist joke, ‘I’m sorry’ or ‘I believe you,’ can make more of a difference than you know,” Cao says. “Our children, our young people, are watching.” 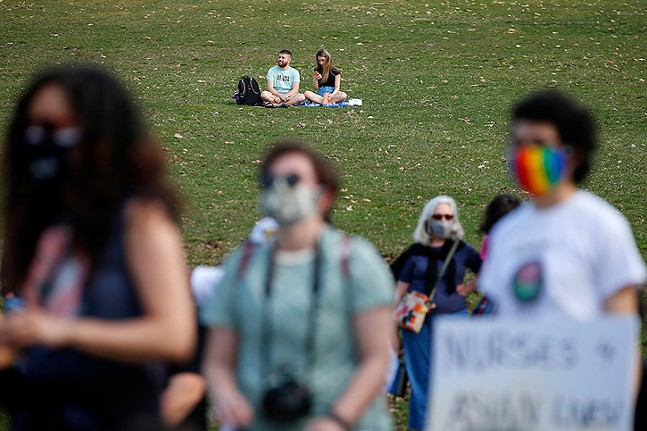 CP photo: Jared Wickerham
People sit on Flagstaff Hill while the Pittsburgh Rally for Solidarity march takes place in Oakland on Wed., March 24.
Many speakers encouraged people to continue their involvement, and the organizers put together an online toolkit that includes the names of the organizations involved along with links to GoFundMes set up by the families of the victims of the Atlanta shooting.

“[I’m] absolutely blown away by the support of the community. I really think this is just one proof, one piece of evidence that a better future is possible, and there’s a whole lot of people working to make sure that that happens,” said Phoebe Balascio, director of outreach at ECAASU.

Another action against anti-Asian violence will occur Sat., March 27 in Squirrel Hill, hosted by the Answer Coalition and the Pittsburgh chapter of Party of Socialism and Liberation.