"When I started playing music, there were no categories." 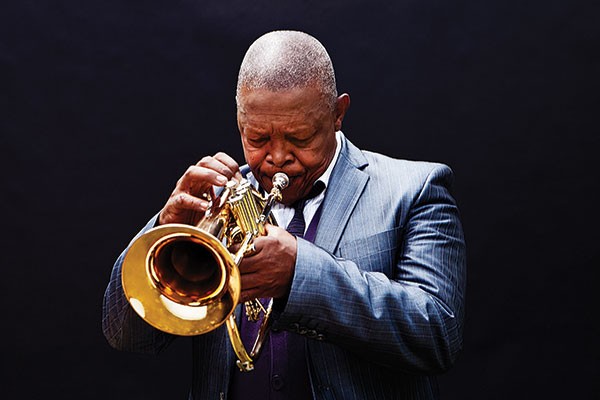 Hugh Masekela arrived in 1960s New York with dreams of joining a hard-bop group like Art Blakey's Jazz Messengers. It was a vibrant period for jazz clubs, and the South African trumpeter met many of his heroes, like Miles Davis and Dizzy Gillespie. They all told him the same thing: Don't simply try to play straight jazz.

"They said I should put in flavors of [the music] where I came from," Masekela says. "So that's what I came up with — the hybrid that I do now. What I do is a lot of whatever comes from ... swing or whatever, flavored a lot with South African music. I became an aspect of the African Diaspora of music."

Within a few years, he was working on an album that needed one more track. He and his band quickly learned the bright tune "Grazing in the Grass," with its infectious trumpet tone and clanging cowbell. The advice of his peers paid off, and suddenly Masekela had a No. 1 hit on the pop charts that sold 4 million copies. He wasn't aiming for commercial success, he says — just to play good music. That same attitude landed him on the bill at the legendary Monterey Pop Festival and, much later, on Paul Simon's Graceland tour, which also drew on the music of Masekela's home country. Today he continues to release albums under his own name, including an upcoming record with Baobab Babes, a female vocal group from Scandinavia that performs South African folk songs.

Speaking by phone just a few hours after flying into New York from South Africa, Masekela says his extensive career doesn't have anything to do with musical distinctions like world beat, which have popped up in the ensuing years. "I don't care for categories. I've been a musician all my life, since the age of 4. When I started playing music, there were no categories. I listen to every kind of music, and I'm interested in everything. And if it doesn't move me, I don't criticize it."

While he has been outspoken about problems in South Africa, like apartheid and AIDS, Masekela doesn't see his performances as an attempt at global unity. "We just try to make good music. We're not on a campaign to bring people together," he says. Even in the '60s, "it wasn't like we were evangelical about it. We never [thought], ‘I'm gonna go out there, SOS people and change people's lives.' We just wanted to play well."

Masekela, who turns 75 this year, continues to spend most of his time on the road, by choice. "I'll do a theater production or a record production, working on some television series. I do other things besides music," he says. "I'm on a second novel as we speak. I don't take no breaks. At my age, why slow down? I'm in the great part of my life."