Worms ask so little, and give so much in return 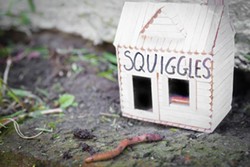 Photo Illustration by Renee Rosensteel
Squiggles rolls over a lot, but can't really fetch, or anything

As we planned City Paper's pet issue, I suggested celebrating the worms who live in a bin in my basement and eat my food scraps. Spirited debate ensued. It was decreed that we would not, in fact, include worms, because: (1) worms are not warm and fuzzy and (2) I wouldn't cry if one of them — or, indeed, all of them — died.

Fair enough. But I'm going to argue that worms are better than pets. At least environmentally speaking.

Conventional pets are in many ways an environmental disaster. The authors of the 2009 book Time to Eat the Dog: The Real Guide to Sustainable Living contended that a single, medium-sized dog has the environmental impact of two SUVs, and a cat the impact of a compact car — in either case, a bigger environmental footprint than the average person in some developing countries. Critics have noted that while those impact calculations were based largely on such pets' meat-intensive diets, the flesh in dog and cat food is mostly meat-industry byproduct, not whole cows raised expressly for the delectation of Mr. Snuffles.

Still, the food and other care products that are grown, processed, packaged and shipped for the country's estimated 70 million pet dogs and 70 million-some owned cats plainly have a sizable impact. Moreover, a study published in 2013, in the journal, Nature Communications, estimated that cats kill up to four billion wild birds and at least 6.3 billion other mammals a year. (Many of the killers are feral cats, which are the blowback of pet ownership.) Then there's poop: It's estimated that cat and dog waste totals million of tons in the U.S. each year — toxic stuff that threatens watersheds, and even the air, with bacterial contamination. Even in a best-case scenario, this waste clogs our landfills with dog feces and 2 million tons of clay cat litter each year. San Francisco once estimated that 4 percent of the city's residential waste was dog turds.

Worms, by contrast, ask so little, and give so much in return. Nine years ago, I mail-ordered a batch of red wrigglers, or eisenia fetida. Ever since, that same vermiculture colony (several generations on) has been turning my household's tea leaves and banana peels into a couple pounds of high-quality fertilizer — or worm castings — each month.

Vermicomposting is quite easy. A good primer is Mary Appelhof's book Worms Eat My Garbage, but it's mostly about feeding the little guys regularly (plant matter only — no meat or dairy, please) and keeping them well covered in shredded paper. The only drawback is a tendency to draw fruit flies. I recommend a four-tray worm bin, which lets the worms migrate upward toward the freshest food and facilitates harvesting worm-free poop from the bottom tray.

Meantime, even as Fido and Fluffy are shipping their poop off to landfills, my worms are keeping my household food scraps out of the waste stream. That's a good deed: According to the U.S. Environmental Protection Agency, Americans discard 35 million tons of food a year. That's more than one-fifth of what the nation trucks to landfills, where its decomposition is a significant source of the potent greenhouse-gas methane. And while regular composting is also a good way to deal with food waste, vermicomposting is a much quicker path to turning lemon rinds into fertilizer.

It's true, of course, that some of my worms are dying even as you read this. But as to my lack of emotional attachment to these invertebrates: Who really needs another reason to cry?