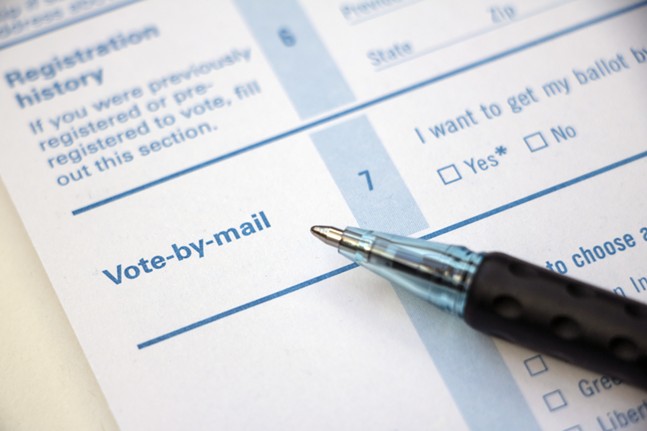 In the middle of the coronavirus pandemic, several states implemented voting by mail for the first time for the primary election. For the most part, it went OK. Vote by mail contributed to significant turnout gains in Allegheny County, though other parts of Pennsylvania experienced some significant delays in counting ballots. But that was the primary election. With no end to the pandemic in sight, the November election will likely be done in large part by mail, a first in recent memory.

You've probably heard a lot of different information about how and when and why to vote by now, so this is your guide to answering those questions so you know how to vote by mail in Pennsylvania.

How do I get a ballot sent via mail?
First, make sure you're registered to vote at your current address in Pennsylvania. Even if you voted in the primary, it's good to double check. It's very easy and takes literally two minutes. You can register online, or in person at your county election office (in Allegheny County, that’s 542 Forbes Ave., Suite 609, Pittsburgh, Pa., 15219-2913). To register, Pennsylvania residents must have a PennDOT driver’s license or identification card, or supply the last four digits of their social security number. Only U.S. citizens are allowed to vote. Deadline to register is Oct. 19, 2020.

After registering or if you are already registered to vote, you can request a mail-in ballot for the general election. The deadline for applying is Oct. 27, but, again, the earlier the better. You don't want to be that person applying for a ballot on Oct. 27 at 4:55 p.m. being like "I learned about this in August, why didn't I apply earlier?!"

The easiest way to do this is online at VotesPA.com/ApplyMailBallot. To apply, voters must supply their PennDOT driver’s license or ID, or their last four digits of their social security number. If voters don’t have those for the application, they must provide a copy of another form of current identification that shows a name, a photo, and an expiration date. This alternative ID can be a U.S. Passport; a U.S. Military ID; employee photo ID issued by a federal, Pennsylvania state, Pennsylvania county, or Pennsylvania municipal government; photo ID issued by an accredited Pennsylvania public or private institution of higher learning; or a photo ID issued by a Pennsylvania care facility, including long-term care facilities, assisted-living residences and personal-care homes.

What do I do when I receive my mail-in ballot?
The earliest ballots can be finalized and sent to voters is 50 days before the election. Once all ballots are finalized, county officials will mail voters a ballot if their applications are accepted. Then, mark the ballot following the instructions and make sure to sign the ballot or it may not count. Place the ballot in the secrecy envelope provided, and mail it to your county election office. (Allegheny County’s is 542 Forbes Ave., Suite 609, Pittsburgh, Pa., 15219-2913.)


The deadline to return your mail-in or absentee ballot is 8 p.m. on Nov. 3. The ballot must be received by that deadline. Postmarks do not count. So, mail in your ballot as early as possibly. And do be safe, make sure the latest you mail them is a couple days before Nov. 3.

What's a naked ballot?
When returning your mail-in ballot, the ballot must be enclosed in the secrecy envelop that comes with the ballot. If the ballot is returned not inside the secrecy envelop, it's considered "naked" and the vote will not count. The Pennsylvania Supreme Court recently ruled as such. It's unclear how many naked ballots there will be in the general election, but other states have rejected up to 5% of mail-in ballots because they were naked. If that were to occur in Pennsylvania, those rejected ballots could very well determine who wins the state, and possibly the presidency. Dress your ballot with its secrecy envelope!

The election isn't until Nov. 3. Why are you telling me about this now?
The earlier people start requesting mail-in ballots, the better. According to the Philadelphia Inquirer, the closer to Election Day that mail-in ballot applications were processed for the primary election, the less likely it became that voters would turn in their ballots. Thousands of ballots were contested for arriving after the deadline. A congressional race in New York City is still awaiting the results from their June primary. It also helps county election offices count the ballots on Election Day if you vote and mail in ballots as soon as you can. County officials can start counting mail-in ballots at 7 a.m. on Election Day. This will help more of the results are counted by Election Night, and considering President Donald Trump is already trying to delegitimize votes counted after Election Night (even though they legally count the same), it's best to vote early.

So are we all going to have to vote by mail or what?
As with the primary election, there will likely be physical polling stations open across Pennsylvania counties, but in likely fewer than usual. If the primary election was any indication, that means those fewer polling stations will have longer lines (longer as in more people, and physically longer because of social distancing). You don't have to vote by mail, but it's a good idea.

If I request a ballot by mail, can I still vote in person?
Ballot applications are currently being finalized, so it's too late to cancel a mail-in ballot. However, if you decide to vote in person instead of by mail, do not throw away or lose the mail-in ballot that was sent to your home. Instead, hold on to it, and take the intact ballot to the polling place on election day, give it to a poll worker, and let them know you would like to vote in person. Then, you can vote on a machine as you normally would. More info is available on the Allegheny County elections FAQ.

What if I request a ballot by mail and it doesn't arrive in time?
This is the first year Pennsylvania is participating in no-excuse mail-in voting, so there are some kinks to work out. One of those was some voters in the primary not receiving their mail-in ballots in time to send them back. If that occurs, simply visit your polling place on Election Day and request a provisional ballot. Several days before Nov. 3, voters can also contact their county election offices and ask why they have not received their ballot yet. Allegheny County's election office information here and Allegheny County voters can stay updated on election news by subscribing to the county's new election newsletter.

If we have to vote by mail, shouldn't the postage be free?
It should, and it will be. Pennsylvania secretary of state Kathy Boockvar announced on July 31 that mail-in ballots for the November election will come with prepaid postage.

If and when you can get to the Post Office, I recommend buying a sheet of forever stamps. They really do last forever! I put a sheet of Lena Horne stamps three years ago that I'm only halfway through.

What happens if I receive multiple mail in ballots?
During the primary, some Pennsylvania voters received multiple ballots before Election Day. It is illegal to vote more than once per election. So, this suggestions is pretty simple: just fill out one ballot and mail it in. Shred the other duplicate ballot(s). Even if you try to mail-in multiples of the same ballot, there is a barcode attached to each of your ballots, which ensures that it cannot be counted more than once.

I hate both of the presidential candidates — does any of this apply to me?
It's your business whether or not you choose to vote in the presidential election, but you should still request a mail-in ballot, or otherwise plan to vote, because there are dozens of other elections where your vote matters. There are races for Congressional candidates, state representatives, and ballot measures that are equally, if not more important, than the presidential race. Because of the media frenzy, it can feel like the presidential race is all that matters, but change starts locally.

I keep seeing stuff about the U.S. Postal Service being in danger. What the hell?
I agree, what the hell? In May, businessman Louis DeJoy, who has donated millions of dollars to both Trump and the Republican Party, was appointed as postmaster general. Recently, Dejoy instituted cutbacks, as the USPS has been struggling financially for years. And the cutbacks include cutting overtime pay that would ensure all necessary mail and packages are delivered everyday.

Related: Trump recently tweeted that "Mail-In Voting, unless changed by the courts, will lead to the most CORRUPT ELECTION in our Nation’s History!" He also said that mail-in voting would lead to "the most INACCURATE & FRAUDULENT Election in history." (This tweet came after the Republican National Committee was actively sending mail-in ballot applications to Pennsylvania Republican voters.)

So, the president is against mail-in voting and shows animosity toward the USPS in general, and the new postmaster general is a big Trump supporter. That could mean choppy waters for the 2020 election that will likely conducted mostly by mail.

The good news is there has never been more vocal support for the Post Office. There are social media posts, petitions, and letter-writing campaigns going around asking to help "save the USPS." There are even posts encouraging people to buy merch from the USPS website (like this postal carrier costume for a dog which I would buy immediately if I had a dog.)

I'm still confused. Is there a handy and easy-to-read chart to help me figure everything out?
If you are still confused about the voting process, which can be very confusing, take a look at this hand chart created by the Swissvale Community Action Committee. 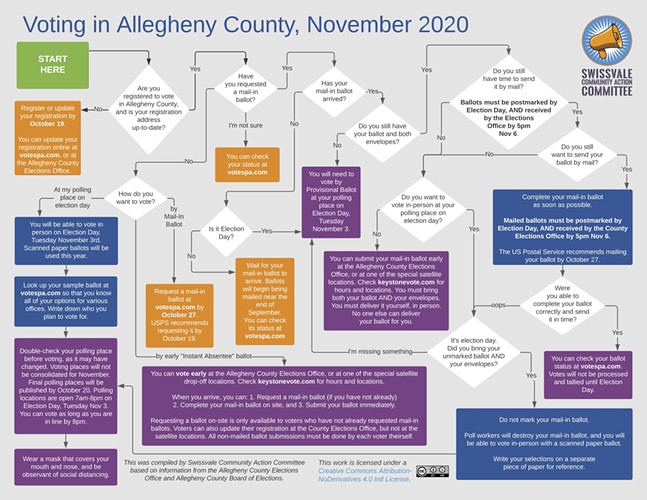