How to plan a marathon

CP photos: Luke Thor Travis
Running the 26.2 miles of a marathon is surely a pain, but the work that goes into organizing one is downright Herculean. Planning a single successful race is a remarkable accomplishment; planning a weekend of races on an annual basis is pretty much a miracle.

With Friday marking the kick-off of the 2019 Pittsburgh Marathon (full name: DICK'S Sporting Goods Pittsburgh Marathon May 2019), Pittsburgh City Paper reached out to Pittsburgh Marathon CEO and race director Patrice Matamoros to find out just how much of a logistical nightmare it is to plan one of these things. Matamoros has been with the marathon for a decade and will step down after this race, so it seemed only fitting to pick her brain for lessons learned and insider secrets.

The Pittsburgh Marathon draws around 40,000 visitors for the weekend, which includes the racers, volunteers, organizers, and cheering sections. That's 40,000 people who need to eat, hydrate, use the bathroom, wear shirts, and, if necessary, get medical treatment.

"Imagine planning the infrastructure of a small town in the United States," says Matamoros. "We bring in our own electricity, our own hospitals, our own porta-potties, and our own transportation system to get the runners to and from the exchange zones. Then we have our own communication system and security. And we manage a multi-million dollar budget."

Matamoros has a full-time staff, plus 250 seasonal workers and 4,000 volunteers for the big weekend.

Injuries (and babies) will happen

With this many attendees and participants involved - not to mention the potential heat of early May and the strenuous nature of the event - injuries are pretty much unavoidable. The organizers can only do their best to ensure that there's enough medical staff to treat injuries quickly and, hopefully, get people back in the race.

"We're not only worried about participants, but worried about the people who might have to get to the hospital, but can't [because of the road closures]," says Matamoros.

With 70 bus routes impacted on race day, the organizers coordinate with the Port Authority to design detours, and work with city ambulances to make sure people needing medical care can get to the hospital as fast as possible.


Sunday mass stops for no race

Timing is not in parishioners' favors when it comes to marathons and mass, but the organizers do their best to make sure people can still get to church. There are more than 60 churches along the route, so temporary crosswalks are installed to get churchgoers across the course during the race. Alternate routes and transportation are provided if needed. 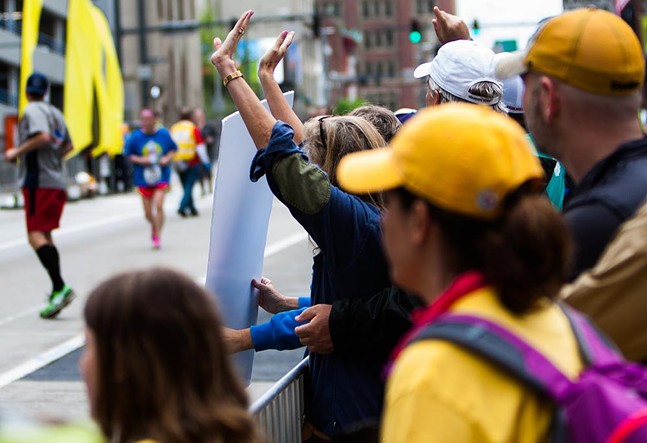 Bringing 40,000 people into the streets, closing roads, clogging resources, it's all a pain in the neck. But Matamoros tries to keep that inconvenience in the proper context.

"People always complain about the marathon, but I always say, 'It's only a short period of time or window that you're inconvenienced. In that window of inconvenience, over $1 million is going to be raised for charity. So that inconvenience goes to a greater good. More than 85 percent of the money raised on race day stays in Pittsburgh with Pittsburgh charities."


The organizers run their own kind of marathon

Matamoros' staff sometimes wears FitBits during marathon weekend, and in past years, some employees have logged more than 30 miles by the time the marathon starts on Sunday.

CP was provided with some numbers from the 2018 Marathon. While there are some changes, Matamoros says the 2019 numbers will be around the same. Here are some memorable stats of what gets used during the marathon:


After a year of planning and 72ish hours of relentless exhaustion, the work does not actually end when the last runner crosses the finish line. There's the tearing down of tents, tables, and signage. The goal is to get the city back to normal by around 6 p.m. on Sunday night. Then there's followup with anyone who may have needed medical attention during the race. And then helping with the minutiae of the aftermath, things like lost items, t-shirts in the wrong size, or runners who did not receive their metal.

Once the organizers have finally cleaned every street and tied up every loose end, Matamoros says it's customary to give at least a day before diving back into work. If you're planning a meeting with a marathon organizer for the day after the race, don't do that.

No rest for the weary

Planning for the next year begins within the week. Ideas for 2020 are already in motion.