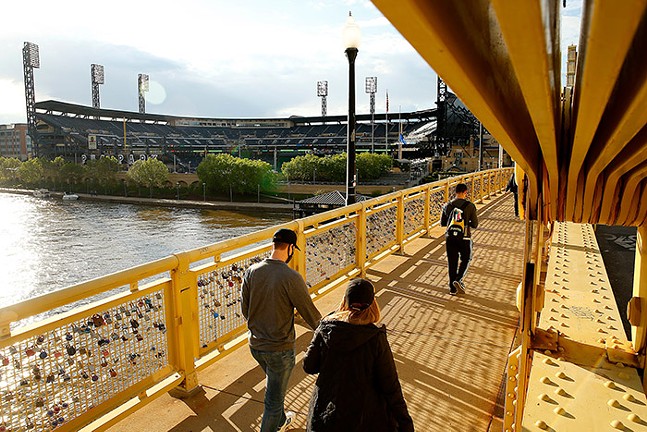 CP photo: Jared Wickerham
Fans cross the Roberto Clemente Bridge on their way to PNC Park before a Pittsburgh Pirates game against the San Francisco Giants on Thu., May 3, 2021.
Over the course of the last year, if there’s been one thing we’ve learned to do, it’s cheer for the little things. So if you happened to be at PNC Park on Monday night to see the Pirates lose 14-1 to the Reds, your correct response should’ve been, “Hey, it’s still baseball."

That’s right, the Buccos are back, and playing in front of fans for the first time since September 2019. They are currently operating at roughly 25%, or just under 9,000 people, with the shift to 50% capacity likely coming by the end of the month. And here is where we take a moment to pause and allow you to let out all potential jokes of, “That’s their normal attendance anyway!” and “They might not get that all season!”

OK, now that they’re out of your system, in all seriousness, while the Pirates may not be … wonderful this year, they started off better than expected! They were 11-11 through nearly a month, before hitting a very rough patch these past 12 games or so. But this team is built for success in the future, not the present, and the best case scenario for the year still probably is not going to be a team that’s going to rack up a lot of wins.

The great part about baseball, however, is you don’t really have to care! Just think of how long you’ve been deprived of sitting outside on a nice early summer evening, having a beer and hanging out with your friends at PNC Park, and all of a sudden losing 7-1 behind pitchers you’ve never heard of doesn’t sound that bad. So in a season where caring about the team on the field is secondary, here’s a guide to getting the most out of your trip to the ballpark, even if you don’t know the first thing about what On Base Percentage is, and have no desire to learn. Here’s the Guide to Pirates Baseball if you Don’t Care About Pirates Baseball:

We’ll start with a cliché of a cliché, but it’s the ballpark. There’s a reason that in a survey last year from The Athletic, the most overwhelmingly popular answer to the question of “If you could adopt another team’s ballpark as your own, what would it be?” was PNC Park. Being away from it should only make the love grow stronger. Show up, sit on the third base side, and take in the best view of your home city that you can find, the beauty of baseball with the backdrop of a home on full display.

OK, now that I’ve dipped into the majesty, we can come back to reality. PNC’s food is not as good as it could be. While certainly not awful, it doesn’t have those “wow” items that many other stadiums do that separate themselves and show off their local cuisine. So if you’re visiting from out of town, get a Primanti’s sandwich over in Section 110 because this is a Pittsburgh publication, and I legally have to recommend that. Otherwise, grab some crab fries over in Section 128 because everyone deserves fries dipped in Old Bay and cheese sauce, or go out behind Center Field and get some barbecue from a Pirates legend at Manny’s BBQ.

The Athletic did a ranking of each stadium’s beer selection in 2020, and PNC Park ranked 19th out of 30, which honestly seems a little high. I’d recommend stopping by Section 130 and seeing what they have on tap (usually something from Tröegs Independent Brewing or Victory Brewing Company) and if you happen to splurge into the Club Level, you can grab some good stuff. But in a city with so many dozens of great local breweries, the lack of places like Cinderlands Brewery, Dancing Gnome, and Grist House Craft Brewery is glaring.

One of the best ways to enjoy a Bucs game is starting the process early. Argue (legitimately) all you want about the merits of taxpayer-funded ballparks, but the city planning around the North Shore has created an atmosphere that allows for a legitimate buzz on a game day, where the neighborhood hums and you can enjoy your time outside the park as much as you can inside. There are tons of good options for places to go, from Burgatory to SoHo to just tailgating in a parking lot (once it’s allowed again). But I’d recommend going to Mike’s Beer Bar. Located literally right across the street from the gate, Mike's lets you hang outside and soak in the atmosphere, while choosing from a drink menu of over 500 beers. Seriously, they have everything. And with a food menu that has expanded to include meals-on-a-stone that cook in front of you, it’s a pretty great go-to that may have you forgetting to attend the game.

PNC really is a crown jewel, so there’s a lot to potentially nominate here. However, I want to highlight a really cool feature that the Pirates have implemented in the last couple of seasons, and that’s the Sensory Room. In partnership with the company KultureCity, the Pirates have become one of the only MLB teams with a fully certified sensory room for those with sensory processing needs.

Located on the Suite Level in Suite 65, the room is equipped with things like bubble walls, sensory art panels, and bean bags. You can also pick up sensory bags at no charge from the main Guest Relations office, which include things like fidget toys and noise-cancelling headphones. For all the fancy touches put on the ballpark in recent years, this might be the most impressive and inclusive one to make sure that all fans can come enjoy the game.

Once again, insert your clichés here about, “There’s not a bad seat in the ballpark!” And that’s true. But if you’re looking for the true experience, burying yourself under the overhang in Section 103 with no view of the city isn’t the way to go. So if you want to go with a pretty good value, grab a seat in Section 127 with a perfect view of the skyline. If there’s no budget? Try Section 222. The Club Level is a pretty great deal, with expanded food and drink options, an indoor lounge complete with pool tables and chargers, and still the same gorgeous view.

The Pirates players’ social media took a real hit this offseason, with the trades of Jameson Taillon (taking all of us on a coffee tour through Pittsburgh) and Trevor Williams (who was just hilarious). Luckily, we still have Steven Brault (@SquidBrault), who’s currently hurt but is the opera-singing, podcast-hosting, homerun-hitting pitcher who brings some energy and humor to the team.

Pirates fandom online is … an experience. Somewhere in between sadomasochism and high comedy, you’ll find Pirates Twitter is a small but devoted group. So I’ll shout out a few of them. Ethan Hullihen (@ethanhullihen) is the data cruncher, obsessively tracking each transaction and dollar amount, and doing it extremely well. Steelo (@steelocity) will probably have you absolutely furious at half of his takes (don’t get him started on throwing at hitters), but the comedic relief is much needed. Finally, go follow Hammerin Hank (@letsgobucshd56) if you just want some live tweeted Pirates games with some much needed positivity.

Whether you care about the games or not, you should care about Ke’bryan Hayes. He’s currently working his way back from a wrist injury, but when he’s on the field, he’s who to keep your eye on. He’s absolutely dazzling on defense, a vacuum cleaner at third base who makes every play in sight. Oh yeah, and he can hit too. He’s only 24, he’s charming, he’s going to be the face of this team for a while now. Get on the train early.

Unfortunately, too much of the local coverage of the Pirates can be reduced to cheap jokes and lazy analysis. But there’s some good in there too. Jason Mackey at the Pittsburgh Post-Gazette has done a wonderful job being straightforward and honest in his coverage, but I’ll give some love to someone on the rise. Alex Stumpf at DK Pittsburgh Sports has simply grinded his way to being one of the best writers on the Pittsburgh Sports beat. From the Point Park Globe up through the Point of Pittsburgh, he’s kept going, and has now found himself as a writer covering the team in an easy-to-follow, professional manner who’s written some great features to boot.

Now, the popular opinion here would probably be the Pierogi race. But! Many other teams have done their own “race of comically large foods or people,” and many better than the Pirates (looking at you, Milwaukee’s Sausage race). So instead, I’m going with the mid-inning Super Mario Run on the Right Field Scoreboard. Using their massive field-level video board, a fan is selected to compete in a real-life video game. Set to a timer, you have to jump and smash blocks, collect coins, and set your best score. It’s utterly ridiculous and can often lead to people taking very stupid falls. What more can you want?

If you’re going to a Pirates game and you don’t really care about the Pirates, you at least need to be able to snap a couple good Instagram stories. Again, there’s not really a bad spot to do this, but some are better than others. If you’re willing to make the hike, climb up to the 300 Level, and go right behind home plate, it’ll be about the best aerial shot of you and the city you can get. Otherwise? Do it before you come in and head on down to the riverwalk. Right along the park’s outfield, you can do a whole photoshoot by the water before you even come in.

What to Watch out for at the Game

Like any stadium, PNC has its drawbacks. There aren’t many, but the biggest problem I see there is the lack of concourse space. With the reduced capacity, it should be less of an issue right now, but once limits start increasing and you hit a popular weekend game in the summer, that trip to get a beer and a dog can feel absurdly cramped.

This one is easy. Come early to the game. Camp out in left field in the front couple of rows during batting practice (or hell, just buy a ticket out there — they’re dirt cheap). Get home run balls or ones tossed to you by the outfielders. Profit. (Seriously, like all MLB stadiums at this point, the team stores are wildly overpriced, so trying to do this is far more fun than spending $120 on a jersey.)

The best place to park? Don’t! Take the bus. The best strategy, and most scenic way of getting there, is getting somewhere downtown on the bus, then walking over the Clemente Bridge. Feeling the buzz of walking over with others, getting asked to buy cheap gear and water, it’s all part of the experience. But fine, if you are insistent on driving, park in Nova Place or one of the few lots. I’ll just judge you.