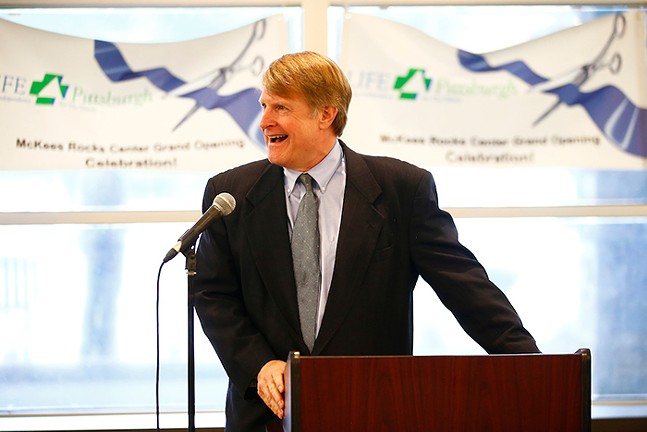 CP photo: Jared Wickerham
Rich Fitzgerald at a ribbon cutting ceremony at the Life Pittsburgh event in McKees Rocks
Allegheny County Executive Rich Fitzgerald is well known around Southwestern Pennsylvania for his impeccable Pittsburgh accent and his long time in county government. But after a video of him criticizing Ted Cruz went viral, he has a new distinction and nickname: yinzer Jeff Daniels.

In a tweet posted by KDKA-TV’s Chris Hoffman, Fitzgerald, a Democrat who lives in Pittsburgh’s Squirrel Hill, is seen in video calling Ted Cruz “outrageous” and says Cruz “doesn’t know what he is talking about,” in reference to Cruz claiming that the U.S. re-entering the Paris Climate Agreement will hurt Pittsburgh.

“He is a climate denier, he was a COVID denier,” said Fitzgerald of Cruz. “We believe in science around here. And why Senator Cruz thinks he can tell Pittsburgh ... we are doing just fine. This is a guy that was really part of the insurrection, part of denial of elections, so I don’t think this guy has any credibility. We will run what we need to do here, Senator, and keep your nose out of our business.”


Allegheny County Executive gave us this answer when we asked for his reaction to Senator Cruz’s statement about the Paris Climate Accord not helping our area. @KDKA pic.twitter.com/QcINnuy3yS

Hoffman’s tweet was posted on Jan. 21, and it has since gone viral with other large accounts across Twitter sharing the video. Not only did the video likely introduce many across the U.S. to a really great example of the yinzer accent, but many Twitter users also noted Fitzgerald’s resemblance to the actor Jeff Daniels.

So many people made this comparison that “Jeff Daniels” started trending on Twitter. Fitzgerald has now been dubbed the yinzer Jeff Daniels. And with his floppy mop of red hair and dad-like demeanor, who can fault anyone from making the comparison?

Allegheny Co. Executive Rich Fitzgerald destroys @TedCruz in his response to the Paris Climate Agreement and Pittsburgh. Pittsburgh wants no part of Cruz, LOL. I’m here for it. Also... he does look exactly like Jeff Daniels. 😂😂😂 https://t.co/sN1pWox2GX 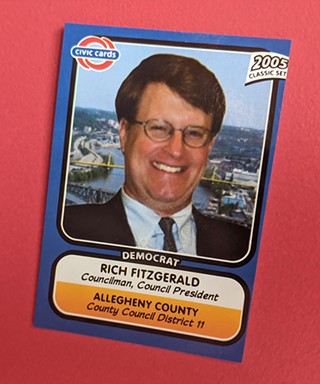 CP photo: Lisa Cunningham
Rich Fitzgerald's 2005 CivicCard
Fitzgerald’s new found internet fame and association with a celebrity isn’t his only humorous celebrity story. According to the Pittsburgh CivicCards trading card set from 2005, a fun fact about Fitzgerald is that he once sang on stage with John Cougar Mellencamp at the Star Lake Amphitheater, just outside of Pittsburgh.

Jeff Daniels will never have that much yinzer cred.