CP Photo: Jared Wickerham
Baird’s apartment building in North Oakland
On Feb. 27, 2020, Daniel Baird and his roommates received a letter under their door. Costello Management had purchased the North Oakland building they lived in just two days earlier and was terminating their lease so that it could begin renovations. Baird and his roommates had until the end of March to leave.

“It was a very shitty feeling, to put it blatantly. It was, like, pretty stressful, you know?” says Baird, who had been completing his final semester at the University of Pittsburgh at the time.

While this kind of forced departure is not technically an eviction — which requires a written notice and hearing — it has similar destabilizing effects, both for the people and communities affected.

As Pittsburgh draws more jobs in the tech and health care fields, it becomes a more desirable city for real estate investment wishing to profit off of neighborhoods’ increased area median incomes (AMI). While some developers raze blighted or vacant properties and replace them with new housing units, others purchase existing units, sometimes displacing those who already lived there, and renovate them before selling or renting them at an increased market value.

These displacements often have a lasting negative, at times traumatic, impact on people, families, and communities. While many Pittsburgh properties require some level of repair, immediate displacement or disproportionate rent increases without consideration of current tenants’ income can contribute to gentrification. It’s unclear how to completely prevent further displacements like these in Pittsburgh, but community members are trying to mitigate the effects through a handful of strategies, such as community land trusts, tenant cooperatives, and inclusionary zoning ordinances.

“I like to think of it as a layered approach. You need community land trusts, you need inclusionary zoning laws, you need place-based and place-conscious federal subsidized programs, to help with those as well,” says Pitt Law professor and congressional candidate Jerry Dickinson.

Specific working definitions of gentrification vary, but generally, it is the rapid shift in the demographics of an area, often based on factors such as race, income, and age. These demographic shifts affect and are affected by rising property values that can push out current residents, who more often than not are low-income Black people in Pittsburgh. According to a National Community Reinvestment Coalition study, Pittsburgh was the eighth most gentrified city in the U.S. in 2019, with neighborhoods like Downtown, Lawrenceville, and the Mexican War Streets seeing the sharpest levels of gentrification. In addition to evictions and terminating leases, the City of Pittsburgh Affordable Housing Task Force’s 2016 Housing Needs Assessment identified constrained housing choice, housing market volatility, and economic instability as variables in vulnerability to displacement.

Nikki, a tenant at an apartment in Bloomfield who requested her full name be withheld out of anonymity, encountered an overlap of these causes. Nikki and her roommate had only lived in their Bloomfield apartment about three months when their landlord changed from Arkham Realty to NRM Properties in October 2020. In February 2021, Nikki received a lease renewal contract that mentioned a rent increase from $885, not including utilities, to $1,225, not including utilities.

The nearly 40% increase in rent was untenable for Nikki and her roommate, who tried reaching out to their landlord but received no answers for why NRM was increasing their rent. Their rent increase was also higher than other tenants’ rent increases in their shared building, for which they also received no explanation.

“I just think it's especially cruel during this part of the time that we live in,” says Nikki, noting her increased financial instability and the danger of in-person apartment tours during the pandemic. As someone who grew up in Pittsburgh, she says, “Another thing that makes me really mad is it's so hard to live in the city anymore. And Pittsburgh's not supposed to be like this.”

CP Photo: Jared Wickerham
Pitt Law professor and congressional candidate Jerry Dickinson
To get the greatest return on their investment, developers are typically incentivized to sell or rent those properties at market value rather than at affordable rates, which are determined based on the AMI of a neighborhood. AMI is determined annually by the Federal Department of Housing & Urban Development, and a household is considered “low income” if it makes less than 80% of the AMI. The Pittsburgh region’s AMI for 2020 was $58,100 for a household of one and $83,000 for a household of four. That means a Pittsburgh household of one earning less than $46,500 and a Pittsburgh household of four earning less than $66,400 are considered low income.

Subsidized affordable housing is priced so it does not exceed 30% of a person’s monthly income. But landlords and developers don’t make as much money from affordable housing as they do selling or renting at market values, which are based on what people are willing to pay.

Unlike AMI, market values can change depending on demand in an area. While market values for rental and property prices are separate, they can both be affected by wealthier people entering the market in search of cheaper housing than what they would pay in other cities, especially during the pandemic when remote work is more available.

“We've also seen an influx of folks coming to Pittsburgh, from mostly New York,” says Bloomfield Development Corporation executive director Christina Howell. “What they could buy for $800,000 in New York is a tiny apartment. Here, they can buy a giant house with a garage and a yard and in a great neighborhood, so that's another thing that kind of raises [market values] … It's a bargain to them. So they don't even question it.”

Many Pittsburgh properties, however, are in need of some form of repair. About 70% of Pittsburgh’s housing units were built before 1960, including Nikki’s apartment. The building’s first recorded sale date was May 1950, and Nikki reported to management a roof leak that caused the wall to start falling apart. Baird’s building’s first recorded sale date was November 1961, and he notes that “it wasn't a very nice apartment.” His unit was actually two units combined, with the second kitchen ripped out and converted into a bedroom, although the sink remained in the room.

The investments required to make such repairs increase rental and property values, which to some justifies increases in rent proportional to those improvements as a way to recoup their investment. The risk of displacement and gentrification increases when landlords and developers increase rent beyond what is proportional to those improvements, often catering to higher-income people. Even areas that already have many middle-income residents can be at risk of displacement in favor of even higher-income residents. 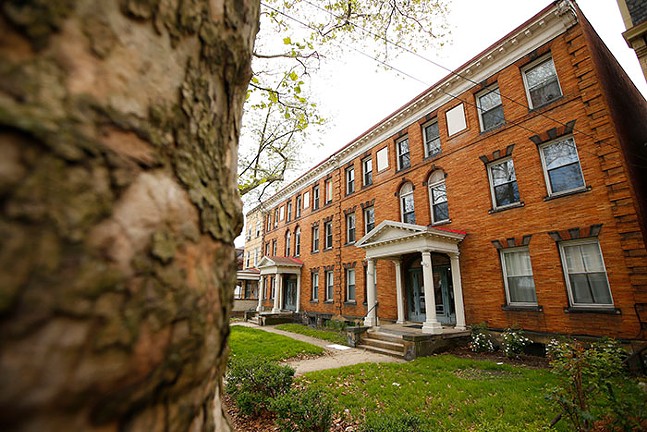 CP Photo: Jared Wickerham
Nikki’s apartment building in Bloomfield
Additionally, rents are not rising throughout the entire city of Pittsburgh. According to a report from apartment search site Apartment List, Pittsburgh rents in January 2021 decreased by an average of 5.7% compared to January 2020 rents, though rents had been increasing in the city before the pandemic hit.

According to the NCRC study from 2019, Nikki’s census tract is qualified as gentrified, while Baird’s was not. Still, the Housing Needs Assessment found that Baird’s census tract had substantial vulnerability to displacement due to housing market volatility and economic instability. Additionally, Baird’s building was only sold for about $196,000 in 2013, but Costello Management purchased it for more than $2 million in 2020, a mark up of more than 900%.

Real estate information company Attom Data Solutions found in a 2019 report that Pittsburgh is the most profitable region in the country to renovate or flip homes for a profit. And in 2020, Pittsburgh City Paper found that a section of upper Lawrenceville located just outside of Nikki’s census tract had more than two dozen home flips between 2016 and 2020, which was about half of the home sales that City Paper counted in the area.

Beyond changes in property values, displacement and gentrification can disrupt cultural, community, and familial networks as people are pushed out of areas where they’ve historically lived and separated from neighbors and family members. Such disruptions can affect other aspects of life such as commutes and access to affordable childcare, as well as creating significant psychological stress.

“If I was a landlord, I wouldn't be able to sleep at night doing this kind of stuff,” says Nikki. “It makes me really sad. I did, I, like, cried about it a couple of times. Because, even right now, it makes me feel like I'm gonna cry.”

NRM and Costello Management declined to comment on Nikki and Baird’s experiences, respectively.

The disruptions and psychological stresses disproportionately affect Black and Brown people, especially in Pittsburgh. As Dickinson notes in his PublicSource essay “Pittsburgh is America’s apartheid city,” it can have a re-segregating effect on neighborhoods.

CP Photo: Jared Wickerham
Rick Swartz, executive director of Bloomfield-Garfield Corporation, poses for a portrait in Garfield on Fri., April 23, 2021.
“Gentrification is tied to the idea of re-segregation by pushing residents of color out and displacing them, and then concentrating them back into a certain neighborhood or within the city, or pushing them outside of the city limits into a different region,” says Dickinson.

While both Nikki and Baird were able to find housing afterwards, both recognized that they had safety nets or privileges that softened the impact — for one, they are both white — which many people in similar situations lack. And because gentrification is a multifaceted problem, it requires a multifaceted response.

Community land trusts, such as the one in the Hill District that Dickinson helped create and the ones in Oakland and Lawrenceville, restrict resale prices to ensure affordability. Housing cooperatives, such as Sheraden Park’s co-op and Belmar Gardens in Lincoln-Lemington, can also keep prices affordable and give tenants more autonomy over their living situation.

Tenant councils can help those who still rent by creating accountability for landlords and helping advocate for tenants. Bloomfield-Garfield Corporation executive director Rick Swartz believes neighborhood organizations such as his can also help mitigate gentrification by opening dialogues with landlords, although he also suggests more direct methods such as pushing for inclusionary zoning laws, which requires a minimum percentage of units in new housing to be affordable.

“That's how aggressive you're going to have to be. ... And you might get resistance, by the way, from developers and real estate companies, of course,” says Swartz. “They may want to go to court and say, ‘We don't like this ordinance. We think it's illegal.’ But that's OK. Let's have that discussion first.”