Photo: Alex Albeck
Ryan Hoffman
Pittsburgh musician Ryan Hoffman has been known for his woodsman-sounding folk music, but now, he is ready to switch things up and experiment in his first project apart from folk-pop quartet Ryan Hoffman and the Pioneers since 2017's The Pines.

After going through quarantine and the surrounding panic, Hoffman came out with a new perspective on his upcoming album. (The album title and the release date are yet to be determined.) With the help of various musicians, Hoffman decided to try something fresh, resulting in a project that looks very different than it did at its onset.

"One of the things we did with this new album is getting away from sounding 'like us' to sounding like whatever the song called for," says Hoffman.

Pre-Coronavirus, Hoffman recorded two songs, "Burn Confetti" and "Highway," which were released on Bandcamp Sept. 20 as singles because he didn't see them fitting into the altered project. Those, along with three others, were originally going to be the entire release.

"Before quarantine, we tracked five songs then stopped due to Coronavirus. I decided these five would just be the whole album," says Hoffman. "However, during quarantine, I was lucky enough to spend my free time writing music and five songs turned into 13."


Hoffman is currently working on finishing the album and plans to start releasing more singles soon. Subject matter ranges from made-up stories to real-life scenarios and quarantine and COVID-19.

Pittsburgh City Paper talked to Hoffman about details on his upcoming release and his changes from previous works.

You’ve been known to make your folk/indie music sound like you’ve lived in the woods your entire life. How do you capture that sound while living in a city? Do you take any inspiration from Pittsburgh?
I didn’t intentionally set out for that sound, not that I mind the description, though. I spent most of my adult life in the city, from South Side, Bloomfield, Lawrenceville, and now Millvale. I do draw lots of my inspiration from nature, and my music really seems to reflect that. Still, my background is far more urban than rural, but I guess this inner outdoorsman seems to have a say when I’m writing songs.

How has coronavirus and quarantine impacted your writing? Has any inspiration come out of it; if so, what?
The quarantine definitely impacted our writing and recording process. I started this album with Nate Campisi at Mr. Smalls in January when we had tracked the first five songs that would be the whole album once we stopped.

It wasn’t until after quarantine that I decided on 13 songs, some relating to my life or imagined stories, while others were a direct inspiration from the pandemic. For example, one song touches on the change in attitudes of people doing everyday things. All of a sudden everyone was suspicious of one and another — going to the grocery store or taking a walk on the river trail became totally different experiences than they were pre-COVID. It was this idea of feeling isolated, even when in public spaces.

It was and is a time of uncertainty and tragedy but also reflection and space in a new way. I think this played a big role in writing this album.

You’re working on a new album currently, but recently released two new songs, "Burnt Confetti" and "Highway." How will these songs relate to your upcoming album?
These were two of the first songs I recorded with Nate. I’m really happy with them, but I’m not sure they fit with the sound of the newer (post-COVID) songs. I still wanted them to be heard, so I released them on Bandcamp.

Without getting those first five recorded, I don’t think I would have been able to write the songs that ended up being on the album. It was a unique experience for me to record an EP, then have to stop and then start again. I think the newer songs are a nice evolution of the previous five.

After the first group of songs, I realized that this didn’t need to be a solo endeavor. So I brought in my collaborator and friend, singer Amy Linette, on all of the new songs. That's a big difference in the album vs. these singles. 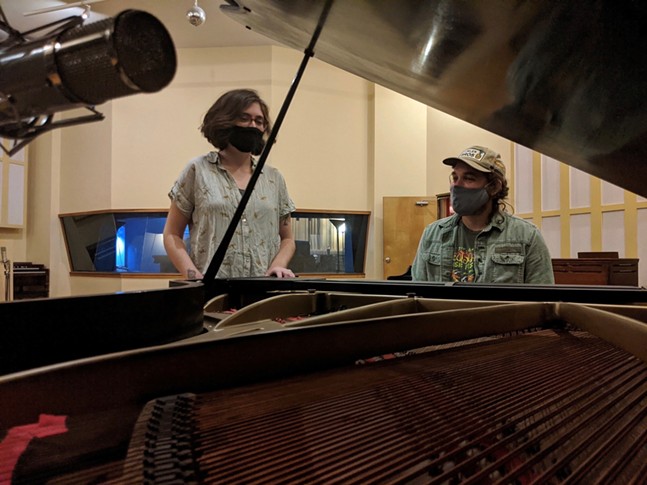 What do these two singles mean to you?
I think they represent a middle ground between my old music and new music. "Burnt Confetti" is actually a couple of years old at this point. It has snapshots of growing up in the midst of the opioid crisis. It talks about the choices people unknowingly made, the way many pulled out of it, and some didn’t, all with a dark musical undertone. It wasn’t really planned, that’s just what came out when I started playing the main guitar in the song.

"Highway" represents a different approach to singing and writing for me. It has exaggerated expressions of feelings and people, and some screaming, something I haven’t done in a while. I also felt like recording this one really opened things up for me in the studio. It was such a departure from previous songs.

How did the instrumental parts come together for your latest release? Will these be the same musicians on your future album?
I surrounded myself with talented people. For these kinds of studio albums, I like to go in with singer-songwriter style songs and leave it wide open as to how they will end up. In the earlier songs (including "Highway" and "Burnt Confetti"), the 707 percussion and guitars played a big role. Then we kind of had this idea that we had to take the newer songs in different directions.

During the quarantine, we worked remotely with drummer Pat Coyle and Ryan Hizer to add some live drums and synth stuff. When we started tracking again, we brought in Read Connolly on pedal steel, Dane Adelman on trumpet and keys, and Amy Linette on saxophone. The instrumentation varies from song to song and [we] looked for ways to break out of a folk-style album.

It took a different direction than I imagined thanks to Nate’s willingness to try every idea anyone had and a good group of musicians. I played a lot of guitar on the album as well, but I’m very grateful for the group we had. The musicians from these singles are on the album along with the others mentioned.

What’s different about this album from the ones you’ve done in the past?
This one has more confidence and personality. I think the songs are a little less self-aware and a little more out there. Amy and I took a different approach to singing. Her parts are lush and layered while my vocals are out front. Overall, the album is much more energetic and expressive than the albums I’ve done in the past.

What are you most excited for with this upcoming album?
I’m just excited for people to hear these songs and hopefully connect with them. One standout is the first song we did after the lockdown, "London Time." I'd been working on the song and needed a second verse, and then started thinking about a story I wrote when I was 19. It was about a man who lived a double life. He was working in the business district of London where he and his family lived, but also traveling to the U.S. to masquerade as a homeless man. Eventually, he lost sight of which life was real as he slipped further into the latter. My friend and I recently started talking about this story and really played out this character, so I based the lyrics around him. It’s actually a pretty fun song. This was the catalyst for the seven songs that came after it.

Is there anything else you’d like to tell readers or want them to know?
Thanks for reading, and I hope you check out the album! It will be out in the next couple of months with singles coming sooner. You can follow me on Instagram (@hoff57) for updates. The new website and YouTube channel will be up when the first single is released probably along with some new socials as well.