How Pittsburgh's Muslim community is celebrating Ramadan during coronavirus 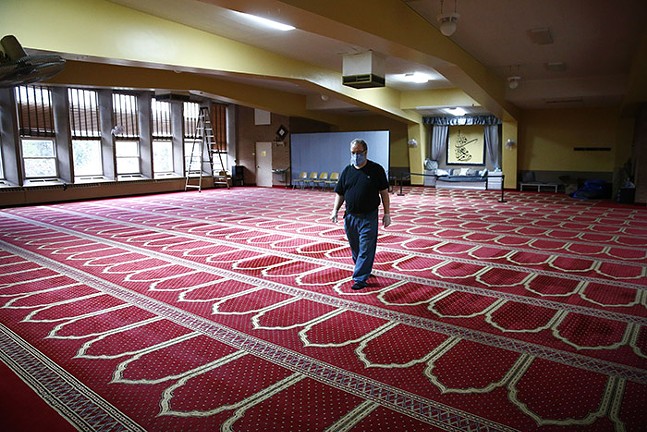 CP photo: Jared Wickerham
A volunteer walks through the large empty prayer room during Ramadan at the Islamic Center of Pittsburgh on Sun., May 3, 2020.
After a week operating with almost a dozen of his workers staying home due to coronavirus protections, Abdullah Salem started to debate whether he should temporarily close his restaurant and grocery. His father opened Salem's in the back of another grocery store in 1981, the year Abdullah was born, and this would be the first time in his memory that they wouldn't be operating for the Muslim community during Ramadan.

While no one is spared the financial, emotional, or health risks of COVID-19, it's particularly trying for Muslims during Ramadan. The holiday, running April 23-May 23, is one of the holiest months for Muslims, a time to refocus their faith and reconnect with friends, family, and neighbors. After abstaining from food from sunrise to sunset each day, breaking fast (called iftar) is an important, spiritual time to share food in a community setting. That's no longer possible to do in person, but Salem, along with many in Pittsburgh's Muslim community, are making the best of it.
click to enlarge 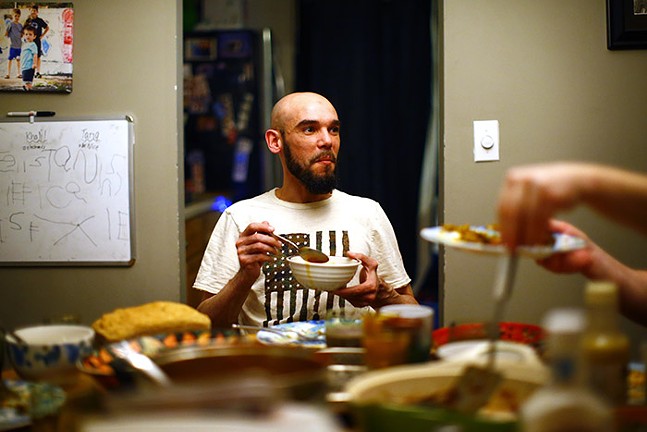 CP photo: Jared Wickerham
Mohcine Eljoufri, director of the Islamic Center of Pittsburgh, breaks fast with his family at their home during Ramadan on Sun., May 3, 2020.

Like many religious leaders, Imam Chris Caras of The Islamic Center of Pittsburgh (ICP), has been streaming nightly prayer services and Qu'ran readings (halaqah) on Zoom from his home during Ramadan. The sessions are private for security reasons, but congregants can register easily online. (Those without access to computers or the internet can use the ICP offices, one at a time, if they need to.) Additionally, ICP is running an online fundraiser to keep the lights on and its community resources operating during the pandemic.

"Our work has not slowed down, but only adapted to new challenges," reads the fundraiser's description by Imam Chris. "We are still supporting the needy. We are still teaching the deen. We are still assisting families with marriage and death. We are still here." While online communication is better than no contact at all, ICP director Mohcine Eljoufri says there's a palpable pain without in-person contact for these prayer sessions. It's like being thirsty, he says, "and you need a whole gallon of water, but you only get two, three sips."

The face-to-face interactions Eljoufri gets with his community now are through delivering meals and groceries, including some donated by Salem's, to anyone who needs them. ICP runs a food pantry, cooks hot meals in the mosque's kitchen, and coordinates with 412 Food Rescue and other nonprofits to ensure there's always enough food for anyone who needs it. The deliveries are physically distant and brief, a minute tops, but Eljoufri says even 60 seconds of interaction with people in the congregation can make a difference. With people losing jobs and the general stress of the pandemic, connecting with people by providing food is one constant that they can rely on.
click to enlarge 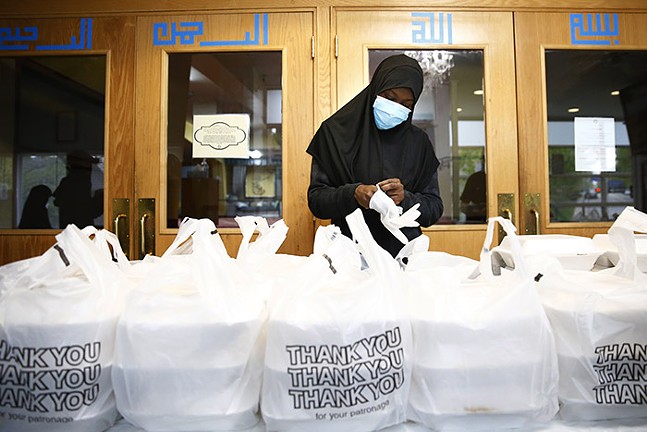 CP photo: Jared Wickerham
A volunteer puts on gloves before handing out Iftar boxes at the Islamic Center of Pittsburgh during Ramadan on Sun., May 3, 2020.

For Salem, that entails changing the way the grocery operates day-to-day. He's donating hundreds of food boxes containing pita bread, dates, rice, meat, vegetables, and silverware. The takeout business is so busy he frequently has to pause orders for 15-20 minutes so his staff can catch up. This also means pivoting to more online orders. Prior to the stay-at-home orders, Salem says he did about 5-10% of his business through GrubHub, Postmates, Uber Eats, and other online delivery services, but now that number is closer to 50%. In the restaurant's dining area, which during any other year would be packed with Pittsburghers whether celebrating Ramadan or not, Salem has removed all the tables and chairs and now uses the area to store groceries. There's tape to indicate six-foot distances for shoppers, plexiglass barriers between customers and workers, the shopping carts are sanitized after every use, and everyone is wearing gloves and masks. Salem misses the energy of breaking fast at his buffet — every year he posts a sign on the first night of Ramadan reading "The Buffet Is For Everyone" — but is coping as best he can.

That cross-section of customers at Salem's is reflective of Pittsburgh's Muslim community, which has populations from all over the world, including Bengali, Egyptian, and Indonesian people. When asked about the dish most traditionally used to break fast, Eljoufri says it really depends on where you're from (though dates and water are generally the first thing consumed after sunset). Eljoufri is Moroccan and prefers mint tea and a traditional Moroccan dish called harira, a soup generally consisting of lentils, chickpeas, tomatoes, and meat. Salem, on the other hand, is often still working at sunset and ends up breaking fast 20 minutes late with a bottle of Smartwater on his drive home. With no concrete end to the stay-at-home orders in sight and very little chance that things will be opening up before the end of Ramadan, both Salem and Eljoufri are steadying themselves by focusing on the work. The holiday is all about good deeds and as long as there's a viable way to do them, they say they'll keep at it. During Ramadan, it's a reward to sponsor somebody and to provide meals for them to break fast with. 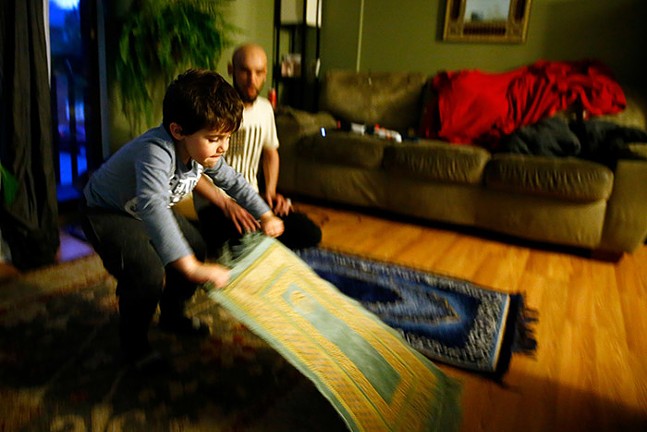 Salem thinks about his "old school" father and how seriously he took the responsibility of feeding his community. It comes with personal sacrifice, but it's a duty he feels particularly obligated to fulfill during the pandemic.

But for now, Salem is cherishing his place in the community and looking forward to the next time everyone can be together, breaking fast at his buffet.

"It's the most beautiful thing in the world," says Salem. "I'm not just saying that from a business point, or an article point, or anything. It’s a place where you’ll see a massive mix of people from all kinds of religions, sitting, can-of-tuna style, next to each other so close. You have people from an Indian doctor who is the head of a cardiac ward sitting next to a local family from Garfield sitting right next to a refugee family. All are talking. All are enjoying. All are eating together."
click to enlarge 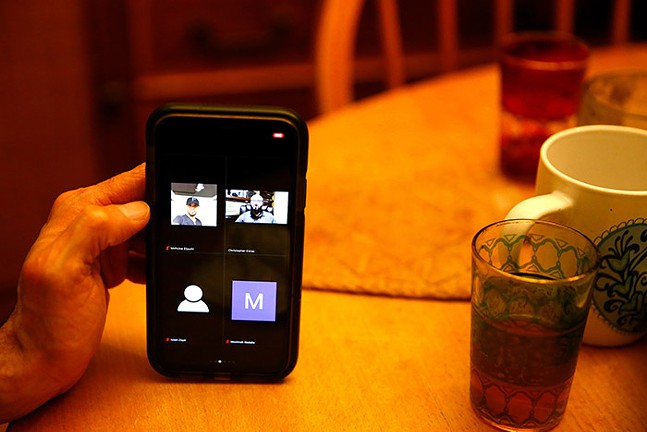 CP photo: Jared Wickerham
Mohcine Eljoufri, director of the Islamic Center of Pittsburgh, listens in on a halaqah Zoom call from his phone.