How Pittsburgh’s Colcom Foundation is 'greenwashing' its anti-immigrant message

But Colcom has also given significant funds to dozens of Pittsburgh-area environmental and civic groups over the years. While the vast majority of its donations are to anti-immigrant groups, many local nonprofits have come to partially rely on Colcom’s donations. Immigrant-rights advocate Guillermo Perez has urged those local nonprofits to reject donations from Colcom because he believes associating with them only helps the foundation with its “greenwashing,” by using environmental advocacy to distract from Colcom's true mission of immigration restriction. Perez says Colcom is masking its true purpose of spreading white nationalism.

Pittsburgh City Paper reached out to dozens of environmental and civic nonprofits that received funding in 2019 from Colcom and asked them about their association with the foundation, and three told CP they have cut ties with Colcom. Pittsburgh area-based Group Against Smog and Pollution (GASP) and Southwest Pennsylvania Environmental Health Project (EHP) told CP that following revelations about Colcom’s anti-immigrant giving, they will no longer accept or seek funding from Colcom. Washington, D.C.-based American Rivers, Inc. also ended its relationship with Colcom because of the foundation's anti-immigrant donations. Two other organizations wouldn’t say if they are cutting off funding, but did express wariness, and even condemnation, of Colcom’s anti-immigrant boosting.

“Although GASP does not work on immigration issues per se, we take the concerns expressed seriously. In fact, our board took a close look at the issue, examining it from various points of view,” GASP wrote in a statement. “While every nonprofit that receives Colcom funding must do what's right for them, we decided in 2019 the right course of action for us was ending the relationship.”

But there are still dozens of local organizations that haven’t weighed in on Colcom’s role in funding large and influential anti-immigrant networks. Until more do, critics of Colcom believe the wealthy foundation will continue to stay under the radar.


Colcom was started by Mellon bank heiress Cordelia Scaife May in 1996. Before starting her foundation, May had forged several close relationships with anti-immigrant white nationalists, the most prominent being John Tanton. In 1978, May helped Tanton create the Federation for American Immigration Reform (FAIR) with $50,000 in seed money. In a 1995 correspondence between Tanton and May’s family foundation obtained by CP, Tanton requested that May pay $20,000 to fund a book on the “evils of multiculturalism.” Through her personal giving and foundations, May has donated more than $180 million to anti-immigrant groups, according to the New York Times.

Anti-immigrant groups that have received large sums from Colcom include FAIR and the Center for Immigration Studies (CIS). Both have been deemed hate groups by the Southern Poverty Law Center (SPLC). As revealed in emails by a former staffer at far-right website Breitbart, FAIR and CIS have had a large influence on White House aide Stephen Miller, who is generally considered President Donald Trump’s most prominent adviser on immigration issues. According to public tax documents, the Colcom Foundation nearly doubled its donations to anti-immigrant groups from 2016, the year before Trump became president, to 2017, Trump’s first year in office. 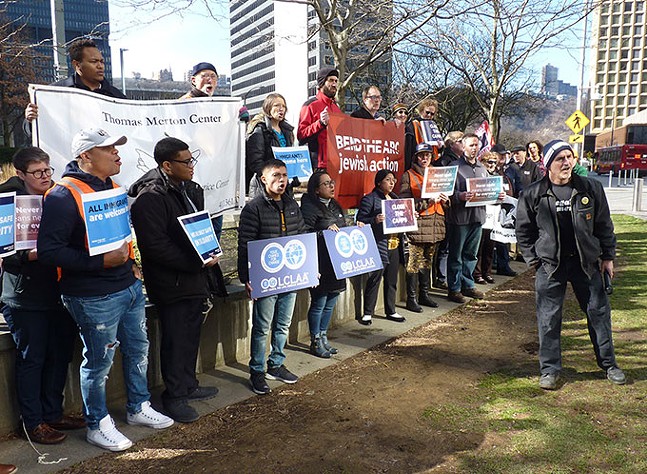 “It is safe to say that without [May’s] money, the anti-immigration movement and the Tanton network would not exist,” says Ahmad. “These organizations are deeply embedding their networks into the Trump admin and existing policy. None of that would have happened without the funding.”

Ahmad says that part of Tanton’s and May’s strategy to grow the modern anti-immigrant movement was to look for allies from other movements, including the environmentalist community. Tanton was originally a board member of the Sierra Club, a large national environmental group, and he was motivated to start FAIR to reduce immigration’s role in U.S. population growth, according to SPLC.


Over the years, this push influenced May. She shifted her early advocacy, which was focused on environmentalism and birth control access, to railing against “overpopulation.” But behind both May’s and Tanton’s rhetoric, there was evidence of overt white nationalism and extreme anti-immigrant sentiments.

“I’ve come to the point of view that for European-American society and culture to persist requires a European-American majority, and a clear one at that,” said Tanton in 1993. May advocated for the U.S.-Mexico border to be sealed and once wrote the U.S. was “being invaded on all fronts” by immigrants and that foreigners “breed like hamsters.”

Eventually, both May and Tanton had roles in creating different organizations that claimed different reasons for U.S. immigration restrictions. Some focused on cultural issues like the fear that English language would fade from American culture, some claimed undocumented immigrants were bad for local economies, and others attempted to link environmental degradation to immigration. All these claims have been disproven by studies, but these organizations persisted, thanks to consistent funding from May and Colcom.

Ahmad says this strategy of tying immigration restriction to other civic, cultural, and environmental movements has also helped Colcom and its anti-immigrant benefactors deflect harsh criticism.

“John Tanton and the organizations he [helped form] started an entire movement that camouflages their white nationalism,” says Ahmad. “And allows them to express anti-immigration rhetoric without sounding overtly racist.”

“Colcom categorically rejects intolerance, racism, and anti-immigrant sentiment,” Rohe wrote to CP. “It refuses to fund groups promulgating such activities. The Foundation supports public education on a long term sustainable level of immigration. This conversation should never be marred by racial bias. The starting point is to respect all people.”

In Pittsburgh, Colcom has been able to operate for decades without much criticism. Their name is etched into the walkway of the Frick Environmental Center. Colcom’s “overpopulation” exhibit has graced the halls of the Carnegie Natural History Museum and the Phipps Conservatory and Botanical Gardens. Both Phipps and Carnegie Museums accepted donations from Colcom for fiscal year ending on June 2019. Phipps spokesperson Joe Reed says that Phipps "neither requested nor received funding in calendar year 2019 or 2020 from Colcom." Reed did not specify why Phipps has cut off funding from Colcom.

“While Colcom scapegoats immigrants and climate refugees, they’re greenwashing their hate by using your organization’s important work fighting the climate crisis,” says Krystle Knight of the Thomas Merton Center, a local advocacy group. “Colcom uses the credibility of local community groups doing good work to build up their own reputation and distract from the reality that their foundation is a major funder of dangerous white nationalist anti-immigrant groups.”

“American Rivers decided in September 2019 to conclude our relationship with the Colcom and Laurel foundations,” says American Rivers spokesperson Amy Souers Kober, also noting May’s other, smaller foundation the Laurel Foundation. “We continue our river conservation work in Pennsylvania and are committed to advancing the values of diversity, equity, and inclusion in the region and nationwide.”

Southwest Pennsylvania Environmental Health Project (EHP) also cut ties with Colcom after learning about their anti-immigrant giving. EHP director Alison Steele wrote in an email to CP that her organization will no longer accept funds from Colcom "unless the foundation were to acknowledge that its funding of anti-immigration organizations is inconsistent with social justice measures – environmental or otherwise – and change its funding priorities."

"Colcom has funded a large body of work in environmental health. EHP had acquired a very small amount of this environmental funding for programmatic efforts around the health risks associated with shale gas and oil development in southwestern Pennsylvania through the end of 2019," wrote Steele. "While our relationship with the Colcom Foundation was always professional and appropriate, we in no way endorse an anti-immigration stance."

Last August, CP reported that wealth management firm Tiedemann Advisors also ended its relationship with Colcom. Other local groups wouldn't say whether they were rejected Colcom funding, but did disagree with any anti-immigrant messaging that Colcom is contributing too through donations.

“We categorically do not share the same views around immigration,” said Aaron Sukenik of the Hilltop Alliance, which accepted a donation from Colcom in 2019. “We work closely to connect new immigrants with organizations and contractor opportunities in Pittsburgh.” Sukenik did not specify if Hilltop Alliance would be ending its relationship with Colcom. 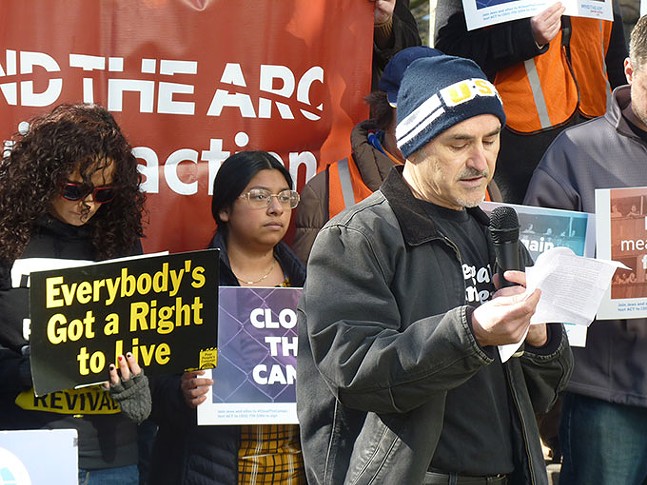 In July 2019, Rohe told the Pittsburgh Post-Gazette that essentially all local Pittsburgh groups told him they were supportive of Colcom’s “overpopulation” advocacy.

Two other local groups, that asked to remain anonymous, accepted money from Colcom but disagreed with the foundation’s immigrant-restriction goals.

“Being against overpopulation is also being against community development and growth,” says an anonymous representative from a local organization. “The economic sustainability and the love of natural places seems pretty at odds with this over population and anti-immigration phobia.”

"Our organization has taken the foundation’s national focus on population impacts under advisement and acknowledges the controversy – even hurt – that it engenders," reads an anonymous statement from other local organization. "We have had internal conversations about our relationship with this funding. We decided we can steward the foundation’s dollars to a positive end for all people of the region when we advocate for their rights to clean air and water, but who are regularly denied both."

Perez noted during last week’s rally that “overpopulation” fears and anti-immigrant rhetoric have been cited as motivations to carry out mass shootings in Pittsburgh and El Paso, Texas. Additionally, the U.S. is a sparsely populated nation with about 327 million residents. If it were as densely populated as Europe, it would have over 1 billion residents.

Perez and a coalition that includes Veterans for Peace, the Thomas Merton Center, and Jewish social justice group Bend the Arc have started a campaign to pressure Colcom to drop its anti-immigrant funding, and to call on the local groups to rejects Colcom’s money.

In a letter the coalition sent to Colcom president John Barsotti, Perez wrote that the biggest threat to environmental sustainability is climate change, not “stigmatizing immigrant families.” He wrote that attacking immigrants “will do nothing to achieve the global response needed” to tackle climate change and “it will only make matters worse by sowing hatred and violence at a time when all of us must come together for our collective future.”

Ahmad says an effective way to get Colcom to stop funding anti-immigrant groups could be just to remind everyone that they are consistently giving money to these groups.