“It’s having confidence and being honest with how you feel.” 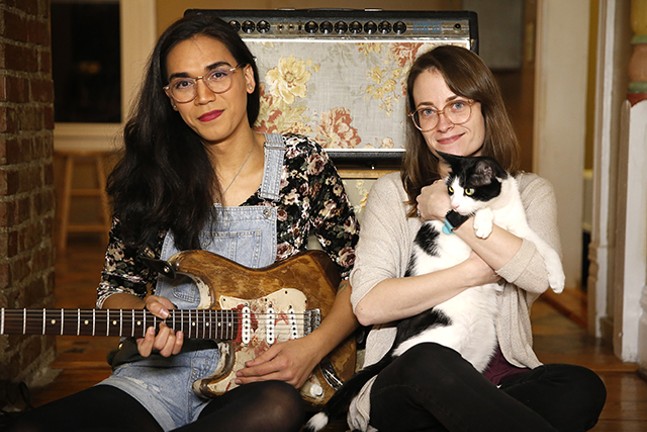 With a little confidence, anything is possible, even creating a band known for singing about cats. Just ask Shannon Keating and Chloe Hodgkins, the married duo who perform as Scratchy Blanket.

The indie emo-pop group came to be on a whim. A friend of Keating and Hodgkins' was looking for acts to perform at a new festival in Lawrenceville, and the couple agreed to perform.

“Then it was like three days until the event, and we were like, ‘Oh we never wrote any songs, we don’t have a real band’,” says Keating. “So, we sat down in our living room with the goal of writing three or four songs.”

The resulting tracks were about each of their four cats. Keating says, “It was like this joke, and people really enjoyed them.”

So, they decided to continue performing. Luckily, Hodgkins had previously been in bands in Pittsburgh, and the pair was already part of the local music community. Finding gigs was an easy task. For Keating, the hard part was believing in herself.

“I tend to be a little less confident. As far as writing and understanding it, music is not really second nature to me,” says Keating. “I’ve always been a singer, but I always had a conductor or other members of a choir to back me up. I went from that to being the only voice really on stage.”

Scratchy Blanket performed as a duo for its first year, with Keating singing lead and Hodgkins on backup vocals and guitar. As they played more shows, they started imagining what would be possible with a rounded-out lineup.

“We felt it would be a missed opportunity if we didn’t try to play with other people,” says Keating.

The Scratchy Blanket founders asked some friends to join them, which filled out the band into the five-member group seen playing around town: Zach Dowdell on drums, Laura Lee Burkhardt on bass/vocals, and Harrison Thurman on guitar. 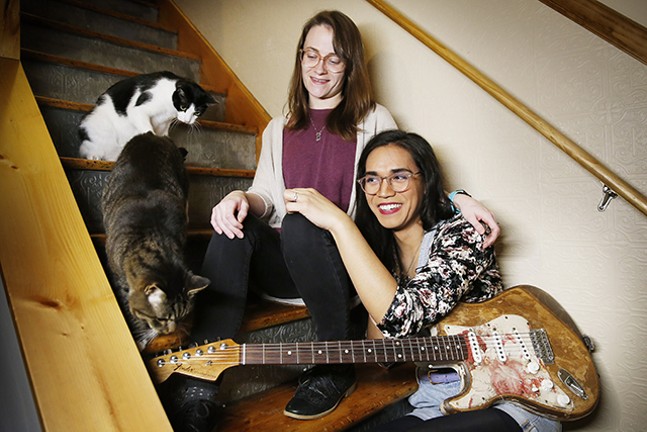 “For the first year or two in the band, I was really not confident at all,” says Keating. “I felt like my music sucked, and I just had to shake that. How could I say that when so many people in the crowd are like nodding their heads to the music, or my friends are all screaming the words, dancing?”

Keating realized that although she was ill at ease, stepping out of her comfort zone was slowly bolstering her self-worth, even if it felt awkward – like a scratchy blanket.

Since she hadn't played in a band until later in life, Keating didn't have the experience of some of her bandmates. But that's never taken away from Scratchy Blanket’s musical effectiveness.

“Some people have this attitude that you have to be a Music God in order to be in a band,” says Keating. “But if you only know three chords on a guitar, you can go on and play amazing music that people are going to love. It doesn’t take being classically trained or this expensive equipment to be good at something. It’s having confidence and being honest with how you feel.”

On rare occasions, like their Jan. 12 show at The Mr. Roboto Project (click here for our venue guide!), Hodgkins and Keating will play a show with just the two of them.

“Sometimes it can be nice to go back to our roots in that way, but I definitely feel more confident having the whole band. It just adds so much to the whole experience of what we sound like.”