Customers line up outside of CY+ in the Strip District
On March 19, Gov. Tom Wolf announced that all “non-life-sustaining” businesses in Pennsylvania would be forced to close operations to help slow the spread of coronavirus. There was a lot of anxiety and confusion about what businesses were deemed essential during the pandemic and which were not.

Luckily for Pennsylvania’s medical marijuana patients, the program was deemed essential and dispensaries across the commonwealth could continue to operate. But like any business open during the pandemic, medical-marijuana dispensaries had to adjust how they operate and customers had to follow suit.

Those adjustments, however, appear to be reinforcing how essential Pennsylvania’s medical marijuana program is. Reports indicate that demand is up for medical marijuana during coronavirus. Social distancing measures like limiting patients allowed into dispensaries at a time and drive-up services haven’t slowed anything down. Actions from the state government have also expedited efforts to get patients medical marijuana cards and medication.
Additionally, the rule changes passed last year, like including anxiety as a qualifying condition, appear to be contributing to the increase of new patients. At a time when anxiety is high for everyone, these changes came at an opportune time.

Dispensaries in the Pittsburgh area and across Pennsylvania are under added pressure due to measures to help stem the spread of the virus, but they too recognize the special circumstances. They know every adjustment is necessary, since the cannabis they provide is a necessary medication for patients.

On March 21, the Pennsylvania Health Department announced new coronavirus-related rules for the state’s medical-marijuana program. They included eliminating the limit on the number of patients for whom a caregiver could supply medical marijuana. (Previously, caregivers could only pick up medication for five patients at a time.) This, in turn, made caregivers de facto delivery services for patients. 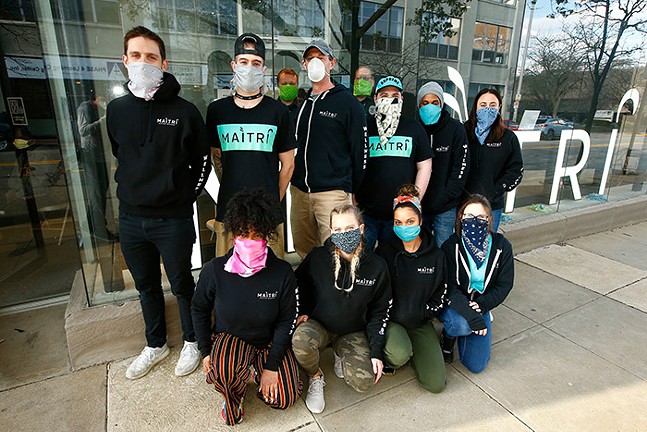 Employees with Maitri Medicinals in East Liberty
As part of the coronavirus rules, dispensaries are now allowed to provide curbside pick-up for medication as well, and doctors can qualify new medical-marijuana patients online or over the phone, when before it had to be in-person.

Kohan is the head of The Healing Center, which operates dispensaries in Cranberry, Monroeville, and Washington, Pa. He says there was an initial surge in medical-marijuana purchases when people thought dispensaries might close, too, but even since then, people are buying more product than they normally would.

He thinks anxiety related to the pandemic is leading to more patients to embrace medical cannabis as a treatment. “We continue to get a large surplus of new patients,” says Kohan.

The Healing Center has responded to coronavirus social distancing guidelines by implementing several changes at their facilities. Kohan says patients don’t ever have to make contact with door handles thanks to a guard who activates the automatic door when patients arrive. The dispensaries also only allow one patient in at a time, and plexiglass screens have been installed at the store’s booths. There are never more than 10 people inside the buildings at a time, including employees, says Kohan.

Cleaning and disinfecting measures have also been increased. Employees are wiping down all surfaces multiple times a day, and the Healing Center is using an electrostatic spray machine to disinfect all the nooks and crannies of the dispensaries. Patients can also place their orders online ahead of time to limit their time inside the dispensaries.

“We are really keeping our buildings very clean,” says Kohan. “We have masks for all of our employees. And everybody has gloves.”

In terms of patient preferences during the pandemic, Kohan says he’s seen an increased popularity of the flower form of medical marirjana. He says it's been a small shift, and it could be because of patients’ apprehensions about vaping. Last year, there was a spike in hospitalizations linked to vaping and e-cigarettes. Health experts have said that respiratory illness makes people more vulnerable to health complications related to COVID-19.

Kohan notes that patients are supposed to vaporize the cannabis flowers, though that’s still different than the cartridges and e-cigarettes that were reported to be linked to vaping health concerns. 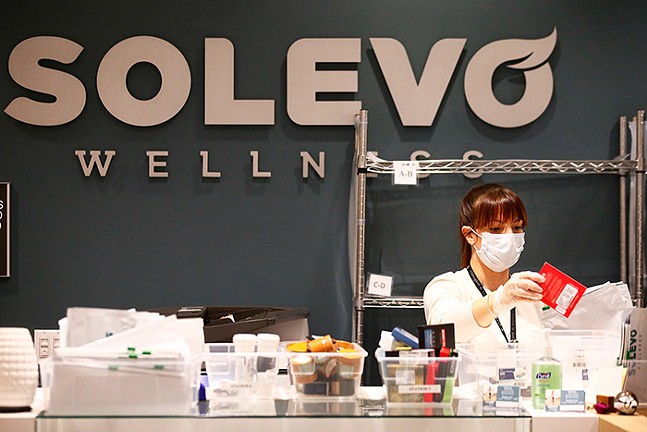 Lia Savini puts away products at the end of the day at Solevo Wellness in Squirrel Hill
The Healing Center isn’t the only Pennsylvania dispensary that has seen a slight increase in business. According to the Philadelphia Inquirer, the Sanctuary Wellness Institute in Chester County has seen business pick up significantly since the pandemic hit, and the doctors at the organization are beginning to take in about 300 calls a day from prospective medical-marijuana patients.

According to numbers released by the Department of Health last week, about 180,000 residents are actively participating in Pennsylvania’s medical-marijuana program.

Samuel Britz, chief operating officer at Solevo Wellness, also notes a slight uptick in patient volumes. He says there was a large increase when the closures were first announced and that things have leveled off more or less since then.

Solevo operates dispensaries in Cranberry, Squirrel Hill, and Washington, Pa. Supply shortages have been an issue for dispensaries in the past, but Britz says that supply is keeping pace with demand during the pandemic.

“We have always been a high-volume purchaser of product, and because of the long-standing relationship we have established with the growers, our inventory levels are high,” says Britz. “Growers continue to provide routine weekly deliveries. We are currently stocked with our highest inventory level since the inception of the program.”

Solevo has also taken extra steps to clean and disinfect their dispensaries. Britz says they added plexiglass guards where appropriate, installed ion air cleaners, and disinfect the buildings with antimicrobial spraying once a week. Britz says that only 10 patients are allowed in the dispensaries at a time to maintain social distancing. Each station is cleaned after every consultation.

Britz says that Solevo’s new online ordering system has also helped with social distancing, and that more than half the dispensary’s patients are currently using the online system. He says supply has been abundant enough that patients have not been running into any “sold out” situations when ordering online.

“We have done everything we can to adjust to the situation and, for the most part, the patients have been very cooperative,” says Britz.

“We are trying to minimize the time we spend with each person,” says Erkes. “Everyone is adapting to this new normal no matter what industry you are in.”

CY+ is also doing pre-packaged orders to limit physical contact. Erkes adds that the company’s dispensaries have also seen an uptick in orders, but he says it's hard to determine exactly what is causing it.

He says that maybe people are stocking up more because they want to adhere to stay-at-home orders. Under the new coronavirus rules, medical-marijuana patients can stock up on medication that will last 90 days, instead of the previous limit of 30 days. 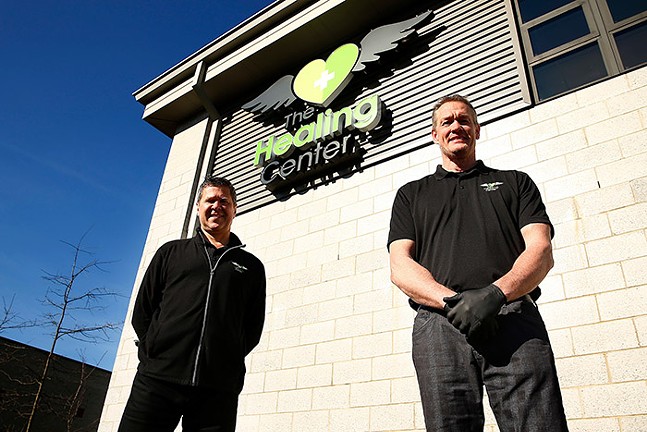 The Healing Center cofounders Chris Kohan and Jay Richards in Cranberry
Erkes has been very pleased with Pennsylvania officials’ response to the pandemic in terms of adapting the rules of the commonwealth's medical-marijuana program. He says CY+ has “always been advocating in making cannabis as accessible as we can” and that online ordering and doctors’ consultations have been very beneficial.

In the future, Erkes would like to see dispensaries themselves allowed to carry out deliveries (current rules only allow certified caregivers the ability to pick-up medical cannabis), but notes that the “state has been great to work with and very open minded to adjusting the rules to keep patients safe.”

Erkes says the rule allowing caregivers unlimited patients has really helped in maintaining social distancing at CY+ facilities. “We are seeing a lot of caregivers taking care of multiple people and this minimizes the amount of people exposing our staff,” says Erkes.

Kohan says that ultimately, the state and dispensaries involved are responding to the coronavirus crisis without compromising the goals of the medical-marijuana program. He says that compassion to patients was what led the state to create the program, and that compassion to dispensary employees, owners, and all the medical-cannabis patients is what is driving decisions during the pandemic.

“You have to be compassionate and you have to keep your people safe,” says Kohan. “Got to do as much as you can without totally disrupting everything. We are dealing with all of those perspectives in a compassionate way. That’s been the biggest thing for us.” 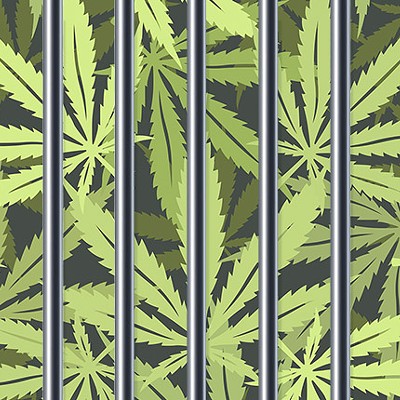