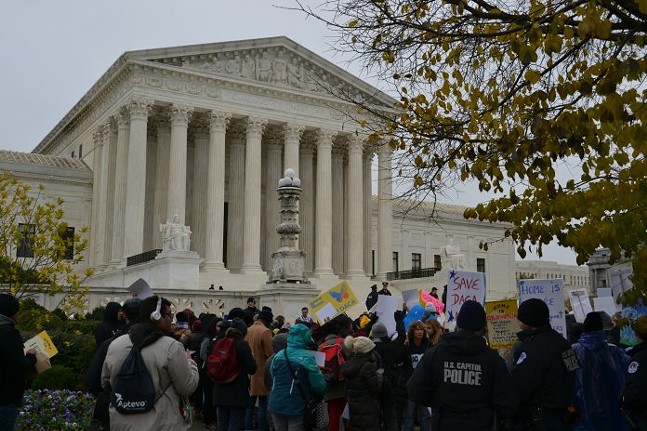 Capital-Star photo by Robin Bravende
DACA supporters rally outside the U.S. Supreme Court on Tuesday, 11/12/19
U.S. Supreme Court Justice Ruth Bader Ginsburg, the second woman to be appointed to the nation’s highest court, died Friday, at the age of 87. The cause was complications from metastatic pancreas cancer, the New York Times reported, citing a statement by the Supreme Court.

In a statement released late Friday, U.S. Senate Majority Leader Mitch McConnell (R-Ky.) said he plans to move ahead to fill the seat, setting up the potential for a brutal political battle ahead of the Nov. 3 general election.

Below are reactions from Pennsylvania politicians to her death.

“Tonight our nation mourns the passing of Associate Justice Ruth Bader Ginsburg. Justice Ginsburg was a pioneer for gender equality, a champion for human rights and a fierce defender of workers on an increasingly corporate Supreme Court. Justice Ginsburg served our Nation honorably and with distinction for four decades. Her heroic battles with cancer inspired countless Americans. I extend condolences to her family and may her memory be a blessing to millions of Americans.

“Consistent with the precedent set by Majority Leader Mitch McConnell in 2016, Justice Ginsburg’s seat should not be filled until the presidential election concludes and the candidate chosen by voters is sworn into office.”

Our nation mourns the death of Supreme Court Justice Ruth Bader Ginsburg. Renowned for her legal intellect and sharp opinions, Justice Ginsburg served on our nation’s highest court for nearly three decades with distinction and honor.

A tireless defender of the Constitution, her historic opinions from the bench broke down barriers for women and protected the vulnerable.

Frances and I join the country in mourning her loss.

Justice Ginsburg was a brave, brilliant lawyer. She was a pioneer who fought with all her might, every day.

Tonight, it’s time for all of us to pause and thank her for her service to our country.

May her memory be a blessing.


I’ve worked around lawyers and judges for years. Justice Ruth Bader Ginsburg was a shining example for all. A gifted legal mind. A champion for justice and fair play. A truly great American who shaped history in a good way. #RIPRBG

Justice Ginsburg was a brilliant legal mind & a tireless advocate for women. Her death is an inconceivable loss on the highest bench of this nation. https://t.co/g9tAvYjoqI

My thoughts and prayers are with Justice Ruth Bader Ginsburg’s family tonight. May God bless them in their time of mourning.

Ruth Bader Ginsburg... what a profound loss to our country. She was a legal titan and a champion for the rights of all. She spent her life fighting for us, and now we need to fight to preserve her legacy. #NotoriousRBG pic.twitter.com/vgQokFA8RU

John Micek is the editor of the Pennsylvania Capital-Star, where this story first appeared.