How Neighborways help provide safe passage away from busy streets 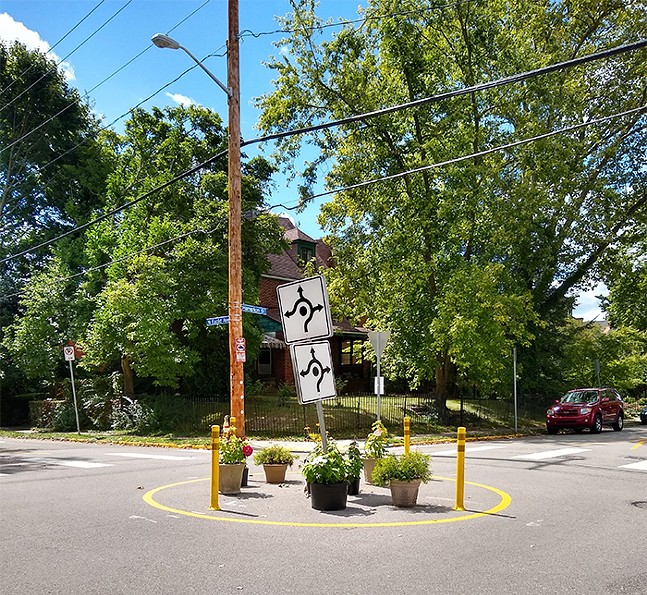 CP photo: Abbie Adams
A traffic-circle in Highland Park meant to slow drivers down and make the street safer for bikers and pedestrians
Pittsburgh, with its infinite hills and valleys, has a lot of narrow streets clogged with parked cars, traffic, local businesses, and homes. On some streets, this doesn’t leave a lot of room for bike lanes to accommodate the city’s growing number of cyclists.

But bike lanes on main streets are not the only way to provide cyclists safer passage, and Pittsburgh is designing an alternative way to help bike commuters: Neighborways.

Today at at 6 p.m., the Pittsburgh Department of Mobility and Infrastructure is hosting a virtual summit to discuss plans to convert Reynolds Street in Point Breeze into a Neighborway, as well as broader plans for other Neighborway projects.

According to a press release from Bike Pittsburgh, who is co-running the meeting, Neighborways are low-traffic streets outfitted with new signage and basic infrastructure designed to give bikers a safe and easy alternative to commuting with cars on the major roads nearby. Basically, it’s about directing bike riders to less-used side streets, and providing infrastructure improvements to make their ride easier, as well as making the road friendly for pedestrians.

“The Neighborway model can significantly reduce congestion across entire neighborhoods with minimal impact on parking,” reads the press release.


TONIGHT: we're talking Neighborways and the street upgrades coming to neighborhoods all over Pittsburgh. Sign up to join and ask questions. https://t.co/2s9ApK4zPS

Like many dense cities, Pittsburgh has its struggles with balancing demand for parking with the demand for bike infrastructure. Ellsworth Avenue in Shadyside is a prime example.

One completed Neighborway in the city has already had success. With East Carson Street in the South Side being so busy with traffic, buses and parking, the two-lane street was not an ideal fit for bike infrastructure, even though there was demand for a bike-friendly connection through the South Side to connect to the trail along the Monongahela River.

So, instead the funneling cyclists onto Carson Street, the city designated Muriel, Whatron and Sidney streets as a Neighborway, and connected all to the trail with a new ramp underneath the Birmingham Bridge.

There are other Neighborways being proposed throughout the city as well, like one along Comrie Way and Coral Street in Bloomfield and Friendship. They are all part of Pittsburgh’s new Bike+ Master Plan that has set out ambitious goals for improving biking, walking, and other alternative transit improvements for the city.

“The Bike(+) Plan is safety, plus access, plus sustainability, plus joyful travel,” said Mayor Bill Peduto in a press release. “It is another building block in strengthening an inclusive, vibrant, resilient city providing travel options that accommodate and respect the great diversity and needs of our people.”

Residents can register at moveforwardpgh.org and the virtual event will be held over Zoom today (Sept. 30) at 6 p.m.