How many parking spots does the new Penn Plaza development really need? 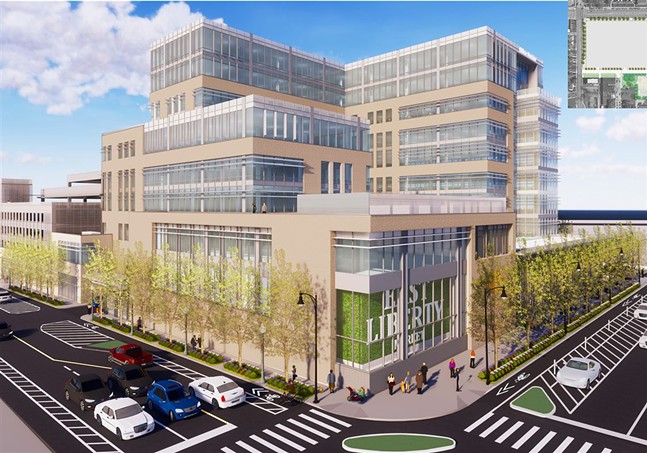 Photo: MV+A Architects
LG Realty's latest proposal for the former Penn Plaza site
Penn Plaza vaulted into Pittsburgh’s affordable-housing lexicon after hundreds of mostly low-income tenants were given eviction notices in 2015. Since then, the old apartment buildings have been demolished and the owner, LG Realty, has been proposing a new development to take its place.

Community advocates have been adamant about wanting some housing, preferably affordable to low-income residents, to be included in the plans. However, no housing can be found in LG’s latest proposal. But the proposal did include substantial parking, in fact, hundreds of spaces beyond requirements.

LG’s initial redevelopment plans from 2016 included market-rate housing, but LG’s latest proposal eschews any housing, instead opting for a mix of retail and office space. The plan includes 50,000 square feet of first-floor retail; developers are aiming for that space to be filled by a grocery store. According to WESA, LG principal Larry Gumberg is hopeful that Whole Foods will reconsider after they pulled out of deal following public pressure.

On top of that retail space, LG wants to build 250,000 square feet of office space. The 300,000 square foot development is proposing 672 parking spaces to accompany a retail space and office tower.

With all these large numbers being thrown around, 672 parking spots might not seem like much, but that figure is well over the amount of parking that zoning requires for LG’s proposed development.

Jonathan Kamin, who represents LG, says the developers proposed that parking figure as “a result of a parking demand analysis based on our uses and established benchmarks for urban office and retail.”

Factor in East Liberty’s 50 percent exemption, and the minimum amount of parking required on the Penn Plaza proposal is 414 spots. (Additionally, those parking minimums could be reduced even further if bike parking is included, thanks to a bike-parking rule written into city code.)

LG developers are proposing 672 parking spots, or 258 over the minimum.

This excess parking gives some credence to advocates’ arguments that housing could be included in the plan. Developers can’t claim housing isn’t possible due to lack of space since they are proposing constructing a large building, just one that houses cars instead of apartment units.

However, replacing parking with housing would change the parking minimums for a development, since Pittsburgh zoning requires one off-street parking spot for every two new housing unit in East Liberty. It’s not a simple apples-to-apples comparison for parking spots to housing.

According to education site Sciencing, parking garages provide parking spaces at about 325 square feet per spot. So 258 parking spots would mean creating a building that is 84,000 square feet.

Accounting for the space taken up by walls for an apartment building versus a parking garage, as reported by the Commercial Real Estate Online Publisher, an 84,000 square foot parking garage would have about 80,000 square feet of space for apartment units.

With the average Pittsburgh apartment being 811 square feet according to RENTCafé, an 80,000 square foot building could house 98 housing units. Those 98 spaces would require another 49 parking spots, which would then overrun the amount of space LG is proposing to construct.

According to City Paper analysis, LG could construct 82 apartment units and a corresponding 41 parking spaces inside the extra space they are currently allocating for parking, since the new parking minimum for that potential development would be 455 spaces.

Rick Swartz of the Bloomfield Garfield Development Corp. says LG’s parking proposal is excessive. He says a 500-space garage would be “more than adequate” and would likely be 25 percent empty most of the week.

“If the Gumbergs are successful in attracting a Whole Foods and other street-level retail stores, they might need 150 spaces for the busier times in the early evenings, or on Saturdays and Sundays,” says Swartz. “But certainly not Monday through Friday, between 9 a.m. and 5 p.m., when you'll have peak demand for parking related to the office space. The demand for parking by users of the office space will be from Monday to Friday, 8 a.m. to 5 p.m., the precise times when the retailers are likely to be much less busy.”

The excess 258 parking spaces would cost LG about $5 million to construct. If LG built the mix of 82 apartment units and 41 parking spaces, it would cost an estimated $10.2 million. According to the Pittsburgh Post-Gazette, LG’s total estimated cost for its proposal is $50 million. An additional $5 million would represent a 10 percent increase in total cost.

But is it even necessary to construct so much parking? A 2014 UCLA study shows that above-ground parking garages as required by parking minimums increase the cost of the average U.S. project by 31 percent.

To mitigate these high costs, cities like Sacramento and San Diego have proposed zoning changes that would eliminate parking minimums within a half-mile of frequent transit stops. If one can reach the building via public transit, walking, or biking, there is little reason to require so many parking spots.

Penn Plaza is just a half mile from the East Liberty Busway station, not to mention even closer to several bus lines. The East Busway carries about 24,000 passengers per day.

About 17 percent of Pittsburgh residents use public transit for commuting, which is twice as high as San Diego and four times more than Sacramento. Data released this week shows 2018 Port Authority ridership increased by 1.2 million compared to 2017.

Furthermore, drawings of the proposal (seen at top of article) indicate the desire to build more bike lanes, undercutting the idea that a large amount of parking is necessary.