How is This My Life? Confessions of a Sane Single Woman author wants you to laugh at her dating life | Literary Arts | Pittsburgh | Pittsburgh City Paper

How is This My Life? Confessions of a Sane Single Woman author wants you to laugh at her dating life 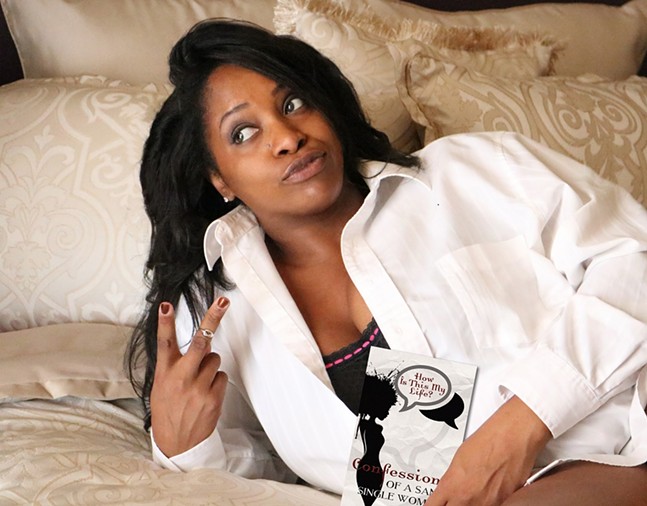 “For an educated Black woman in this area, I don't know what it is on my dating profile,” says Mason, who released the book under the name J.R. Mason.

The 42-year-old marketing professional says she is open about her master's degree and full-time and freelance careers, adding, “I guess that's not desirable or something.”

Mason compares the book loosely to the mainstream erotica hit Fifty Shades of Grey and the sexually-charged antics of the HBO series Sex and the City, often framing stories as coming at the behest of co-workers and friends eager for a laugh or naughty chat. She delivers on the ribald content from the start by introducing the main character being woken up at 2 a.m. by her neighbor's loud sex.

From there, the 276-page book promises a generous amount of anecdotes about disastrous first dates, including one that ended with her covered head-to-toe in dog hair, and another with a man suggesting he release live crickets in her apartment to entertain her cat. In one instance, a man cut their date short and asked to be driven home in time for his 7 p.m. parole curfew (she notes that in their previous conversations, he failed to mention his recent release from prison).

But not every romantic pursuit has an outrageous end, she says, especially at a stage in life when similarly aged partners often want different things. This includes having no interest in being married or having kids, two things Mason still wants.

“At my age, everyone has grown children. I don't have any children at all,” says Mason. “Others have opposite career choices in terms of availability. There was always something that wasn't necessarily a flaw with every man I met, we just weren't on the same life page.”

Mason claims all the dates and other events in the book actually took place, but she condensed them into one cohesive narrative and added a few fictional elements in order to make it read better.

“I didn't want it to be all choppy and weird,” she says. “I wanted it to flow like it was happening over the course of the year.”

She also wanted to cover serious issues affecting women in the Black community while still keeping the overall tone light. Mason admits that being the daughter of a single mother and “absentee father” has had an effect on her life, especially when it comes to finding a partner.

“The fact that you don't hear your father say 'I love you,' that, of course, is going to affect your ability to date functionally,” says Mason. To that end, she espouses the benefits of therapy, which she says is “such a taboo subject in the Black community.”

“I touch on the fact that, yes, I absolutely am going to therapy. There's nothing wrong with it,” she says.

She also explores other challenging areas of life, such as trying to navigate buying a home when you and everyone you know rents.

“I have also had friends and strangers saying, 'Hey, I'm married, and I appreciate my husband way more now after reading this. I don't want to be back on the dating scene,'” Mason says with a laugh. “That's refreshing, I'm glad that you are enjoying my tragedy and that your marriage is thriving.”

While the book deals little with dating during COVID-19, Mason says she wrote the book while she was furloughed from her job due to pandemic-related reasons and hopes How is This My Life can provide some levity to people struggling with the current crisis.

“I want people to laugh because this is a horrible time right now,” says Mason.

How is This My Life: Confessions of a Sane Single Woman is now available for purchase on Amazon.