CP Photo: Amanda Waltz
Villanelle, the rescue dog
“We think she may have eaten a person.”

This is usually how I introduce Villanelle, the dog my husband and I adopted in January 2020. She swept into our lives as mysterious as her namesake: the deadly, yet magnetic assassin in the TV show Killing Eve. An overseas rescue from Kuwait, her papers divulged little in the way of age (one veterinary report estimates 5 years old, another says anywhere from 3 to 7 years old) or breed (a Chihuahua/Corgi mix, maybe Japanese Spitz, maybe terrier).

One thing we knew for sure was this dog had issues, mostly related to her being stuck in an apartment for a week with her deceased former owner (this is where the possible person-eating comes in). A photo from her initial rescue shows a filthy, terrified dog cowering in the corner. The foster, who got Villanelle through a group called Two Ladies Four Paws, warned that she had “little dog syndrome,” that she was prone to snapping and biting. Her behavior was so bad that, initially, her rescuers didn’t think that she could be re-homed.

The first night she was home with us, I had a full-on anxiety attack as she slept peacefully in my lap, her belly exposed. Even as a farm girl who grew up with dogs, mostly Australian Shepherds, I wondered if I was up to the challenge. I never had a little dog before, and never had a dog in the city. My childhood dogs were what you would now call “free range.” I was supposed to get a pit bull, and even put in applications with local rescues. How did this happen?

But Villanelle was perfect for our lifestyle. She ignored cats, which suited our surly Maine Coon, who had not lived with another animal for 10 years. She was not an active dog, preferring to doze on the couch. She was not food motivated, meaning we didn’t have to monitor her kibble or treat intake.

Early on, we were ready to socialize her, introduce her to other dogs and people, show her that the world was not nearly as scary and traumatic as she assumed.

Then, less than three months after we brought her home, everything shut down. We were stuck indoors indefinitely with a dog we had pretty much just met. There would be no dog-friendly brewery visits, no play dates with friends’ dogs, no get-togethers to gauge how well she could handle a group. Just us and a weird, little mutt who we thought had possibly tasted human flesh. 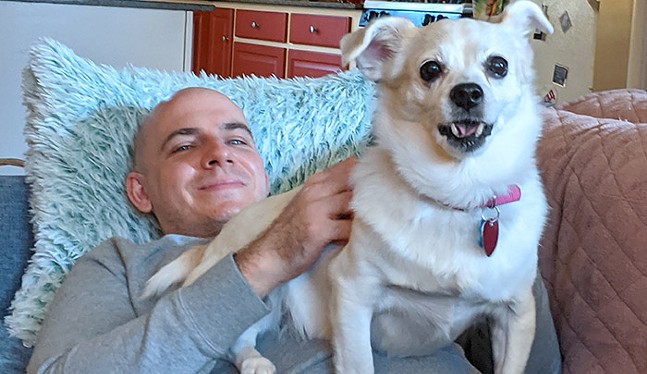 CP Photo: Amanda Waltz
Amanda Waltz's husband with Villanelle, their rescue dog
While not an ideal situation, we made the best of it. As the months dragged on, we got to know her, and she got to know us. We corrected her when she tried to bite, mostly by banning her from the couch, which proved surprisingly effective. We learned her boundaries, how she loved to wear clothes as long as they didn’t have sleeves, how she would flip out if you tried to clean her face off with a towel or tissue. We spoiled her with countless squeaky toys, removing the tags before bringing them into the house so she could rummage through the shopping bag and find them herself.

Over time, what started as distress and reluctance (for me anyway, my husband was smitten from the beginning) turned to devotion. Looking back, I realize that, had circumstances been different, had my husband and I gone into work every day, bonding with this goofy little dog would have been more difficult, more stressful. I saw us rushing home to let her out, only spending a handful of hours with her each day.

More importantly, she made even the most dire stretches of the pandemic bearable, and joyful at times.

Now that we’re vaccinated and ready to mingle, new problems arise. We’re presented with figuring out the logistics of taking Villanelle into the office versus hiring a dog walker to let her out, with trying to make sure strangers don’t pet her without asking first. We have plenty more work to do in terms of making her less terrified of strangers, but I feel a lot better knowing that she trusts me, and that I love my little (possible) man-eater.