CP photo: Jared Wickerham
Maha and Masa Knaineh with Hello Neighbor mentor Clare Wardwell
In 2017, Kheir Mugwaneza, then director of refugee resettlement at Northern Area Multi Service Center (NAMS) in Sharpsburg told Pittsburgh City Paper that “we can use as much support as we can [get]” in terms of supplying assimilation assistance to area refugees.

Since taking office, President Donald Trump has drastically reduced the number of refugees accepted into the U.S. This year, about 30,000 refugees are expected to be resettled in the U.S., which is down from 110,000 in 2016, the lowest since 1980.

Pennsylvania and Pittsburgh could be due for more closures, since the state and region are also seeing dramatic cuts in refugee arrivals, which will drastically reduce funding for resettlement agencies.

About 3,700 refugees were resettled in the commonwealth in the 2016 fiscal year (October 2015 to September 2016). This fiscal year, only about 1,300 have been resettled in Pennsylvania. The Pittsburgh resettlement region (Allegheny, Beaver, Indiana, and Washington counties) is also seeing fewer refugees. The area is down from 651 refugees arriving in 2016 to 235 this year.

CP photo: Jared Wickerham
The Knaineh family with Hello Neighbor mentors Clare Wardwell and Ken Hornfeck
In addition to the humanitarian concerns of accepting fewer refugees — who by definition are migrants unable to return to their native countries due to safety concerns and a certainty they will be persecuted — the closing down of resettlement agencies also has immediate consequences for refugees currently living in the U.S.

The main goal of resettlement agencies is to help refugees get housing, find a first job, and other efforts to help them get established in the first three months of arriving. But a substantial amount of the work goes into helping them assimilate more broadly.

Refugees, understandably, need a lot of informal help on how to navigate a foreign land, such as how to ride the bus, how to get a credit card, how to shop for groceries, etc.

However, a coalition of refugee-related nonprofits wants to pick up the slack, and they'll be convening this week in Pittsburgh at City of Asylum to determine the best way to do so.

Sloane Davidson, of local refugee-mentoring nonprofit Hello Neighbor, set the gathering in motion. Her program was created about three years ago when she invited a Syrian-American family over for Thanksgiving dinner. From there, the idea for Hello Neighbor took off.
click to enlarge

CP photo: Jared Wickerham
Sloane Davidson, of local refugee-mentoring nonprofit Hello Neighbor
The organization pairs immigrants and refugees with native-born Pittsburghers — sort of like a Big Brothers, Big Sisters program between native-born and foreign-born residents. Hello Neighbor started with 25 families from eight countries in 2017; the most recent class was made up of 95 families from 12 different countries.

Over the past three years, most of the refugees coming to Pittsburgh came from Afghanistan, Bhutan, and the Democratic Republic of the Congo (DRC). According to the United Nations, wars and unrest in Afghanistan and DRC have displaced millions from their homes. Refugees from Bhutan were Nepalese minorities in the South Asian country and faced persecution by the Bhutanese government.

The initial goal of Hello Neighbor was to help native-born residents combat xenophobia and to help foreign-born people assimilate, but the organization's expansion has proven to Davidson that there's a need for even more refugee services, especially after their official 90 days of resettlement guidance ends.

“What we have really seen with the mentees, there are some overarching issues,” says Davidson. “Housing, education, health care, and especially for women and children and expecting mothers, are big priorities. But also learning how to get a driver's license and a library card. And help with moving. Learning a new bus route. All these things.”

She says these needs are reflected in Pittsburgh's immigrant history, where social clubs in immigrant neighborhoods helped recently arrived immigrants navigate life in the Steel City.

“If you moved here, you went to the Slovak Club and they had a credit union,” says Davidson. “There were deep cultural neighborhoods, with faith-based social services. That has eroded and that is what Hello Neighbor is bringing back. We get calls for help with birthday parties and dealing with school bullying.”

And she says this sentiment is shared with other refugee- and immigrant-services nonprofits from across the country. Davidson wants this idea to spread.

Since receiving positive press for her efforts, including a segment on NBC Nightly News with Lester Holt, Davidson has received more than 400 inquiries. Most of them inquired about starting Hello Neighbor chapters for their towns, but instead of trying to start over in a town she didn’t understand, Davidson started communicating online with organizations that work with refugees in an unofficial resettlement capacity.

Eventually, eight organizations joined forces with Hello Neighbor: Dwell Mobile in Alabama, Heartfelt Tidbits in Cincinnati, Homes Not Borders in Washington, D.C., International Neighbors in Virginia, Miry’s List in Los Angeles, Refugee Assistance Alliance in Miami, Soft Landings in Missoula, and Hearts & Homes for Refugees in New York. All of the organizations are led by women.
click to enlarge 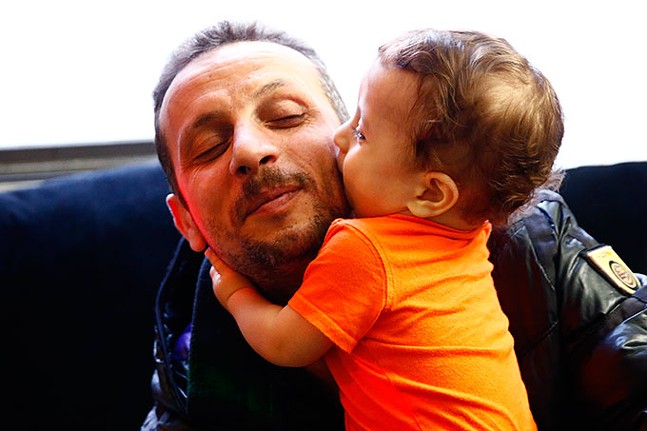 CP photo: Jared Wickerham
Bassel and Mohammad Knaineh, a Hello Neighbor family
The goal is to learn from one another, take the best practices each group has to offer, and see if they will work elsewhere. Davidson says this might mean a new mentorship program in Chicago or a new job placement push for refugees in Pittsburgh.

“Truly selflessly, it was a smarter move and more collaborative, and more authentic to build this together, to get through this together,” says Davidson.

Sheryl Rajbhandari, founder of the Ohio refugee support program Heartfelt Tidbits, says her group has received great support from Cincinnati nonprofits, but struggled to find groups doing similar refugee work that they could learn from. She says the convening at City of Asylum in the North Side will be game changing for her organization.   “It is going to make it much stronger from an advocacy,” says Rajbhandari. “Ninety days just isn't enough time to truly resettle someone.”

Kari Miller from International Neighbors in Charlottesville has seen expansion similar to Hello Neighbor, even without a corresponding growth of official resettlement agencies.

CP photo: Jared Wickerham
Hello Neighbor mentor Ken Hornfeck
She says job placement is a big deal for refugees, because many American employers don’t recognize refugees' education and career experience from their home countries. This means finding jobs for them with upward mobility is huge, even as most jobs refugees get are in low-skilled positions like dish washing or laundry service.  “It’s always disheartening that someone from Iraq who worked with our military and their education is not redeemable,” says Miller. “We need to find bosses who welcome the diversity.” Miller hopes the collaboration can generate ideas to tackle this problem.

Davidson is confident the collaboration of the eight organizations will lead to more structural help for refugee services, maybe even on a level bigger than nonprofit work.

“It’s always disheartening that someone from Iraq who worked with our military and their education is not redeemable."


According to a research study released by Hello Neighbor of more than 150 survey responses from refugees and native-born residents involved in the eight programs, 97 percent of volunteers said they have continued to advocate for refugee issues with local, state, and federal officials.

Jeri Stroade of Dwell Mobile says the networking is going to be “very important” to the Alabama immigrant and refugee nonprofit. Because of the collaborative nature of the event, she is confident refugees and immigrants needs will be front and center, as opposed to the nonprofits.

“How are these people going to get to the point where they are thriving?” says Stroade of newly arrived immigrants and refugees. “Our American idea of success is not necessarily theirs. For some of them, success is when they can be home with family, where they are safe. We shouldn’t necessarily change that idea.”
click to enlarge 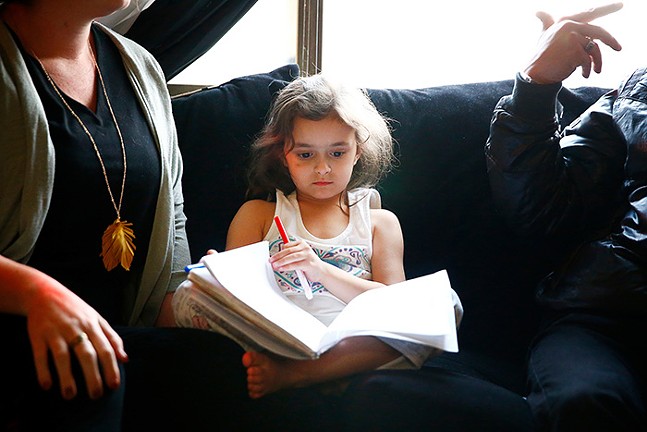 Want to apply to be a Hello Neighbor mentor?

Hello Neighbor is a program that partners native-born Pittsburghers with foreign-born residents with the goals of combating xenophobia and helping immigrants and refugees assimilate to their new lives in Pittsburgh.

The program has grown significantly over the years, as more people are participating in the mentor-mentee program. And the group is still accepting application for the programs that will run from March through August 2020.

Here is what you need to know before applying:
• Application deadline is Nov. 30
• Must commit to an initial six-month matching period
• Attend mandatory orientation
• Live in the Greater Pittsburgh area
• Should spend at least 10 hours per month with your mentee
• Have open communication with Hello Neighbor staff
• Attend Hello Neighbor events
• Be a friend to all those in program
• Advocate for Hello Neighbor