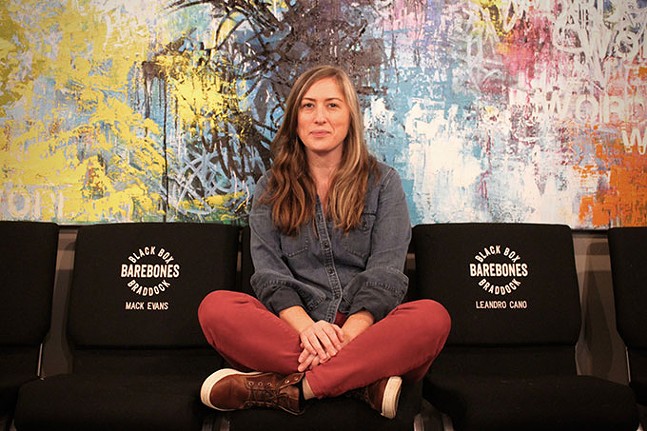 What does a dialect coach do?
Help shape two major things about an accent: accuracy of place and authenticity of sound. I structure a dialect that will bring everyone together to sound like they are from one world. It’s mostly based on place and geography, but social station is also a factor. There are lots of little nuances to help enrich the difference in characters.

What places have you recently taught?
Two countries in Africa, most of the U.K., some Eastern Europe, and almost every dialect in the United States.

Do you prepare project by project?
Even if I have a strong handle on a dialect, I do further research. Every region is different. Pittsburgh, for example, there isn’t just one Pittsburgh dialect. People have influences from Appalachia, around Ohio, the eastern part of the region. Every dialect deserves thorough research.

How do you do that?
I utilize the internet because I’m not someone who has the luxury of being able to travel far and wide. I have to create a narrow search. I like to find daily police blotters. Remember on “CHiPs” when the chief of police would get up and say, “This is what we’re up against today”? Departments around the world will record those and/or broadcast them. You get real, authentic local sounds. I find public speakers — politicians, celebrities, teachers, motivational speakers. Then, I construct a comprehensive guideline of changes based off of Edith Skinner’s “Speak with Distinction” and her version of the international phonetic alphabet and neutral American speech. With Americans who need to learn a foreign accent or even a different domestic accent, we standardize what the neutral sound should be. Because no one in America actually has the neutral American sound, you only find it on TV and film. Everybody is from somewhere that has an influence, that has regionalism.

Is this hard for actors to do?
Yes and no. It depends on whether you have an ear that is tuned to hearing subtle differences. I can tell you all day that what I’m hearing is one sound and to change it to another, but if you can’t hear the difference between the two, then there’s a disconnect.

Do dialects tell us more about people than where they’re from?
Sure. There’s a lot you can glean by listening to the way someone speaks: their educational level, their level of street smarts.

Do you have a favorite?
I love all the Irish regions, probably because of my Irish background. In my career, I have been cast more times than anything as Irish. I’ve played the Irish maid in probably 10 things and was able to explore different regions of Ireland and have a pretty wide range of counties under my belt. Also Australian because those sounds are just — my American mouth doesn’t make the shapes, so it’s a real workout.

What should audience members know?
More than just authenticity and accuracy of place, go into what ultimately makes for dialect work onstage. Artistic choices also affect the outcome. If the playwright gives clues that the character spent time with a relative or neighbor in their formative years, that could have influence. Actors, directors, and coaches will come up with sound that addresses those circumstances and that background.

So it’s something that’s created collectively.
It has to be a collaborative process. At the end of the day, it isn’t the coach up on stage. It has to be something organically shaped and molded by the actors themselves. Authenticity isn’t only about the dialect, it’s also about the actor — what they bring and how they bring it to life.