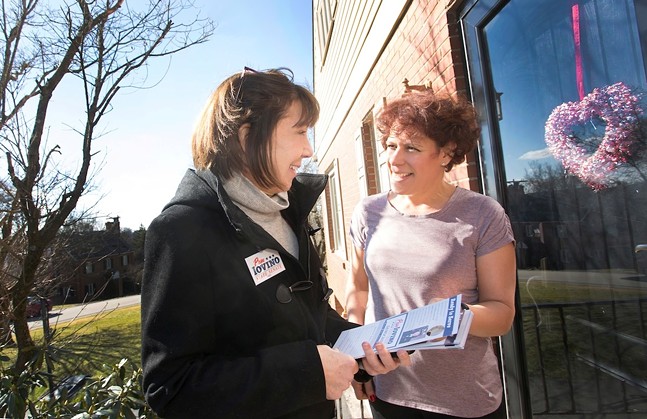 Photo courtesy the campaign
Pam Iovino (left) talking with a voter before Election Day
Democrat Pam Iovino was elected on April 2 during a special election for Pennsylvania’s 37th state senate district. She flipped a seat in an area that President Donald Trump won by 6 points and defeated Republican D. Raja by a margin of 52-48 percent. District 37 includes Western and Southern Allegheny County, as well as Peters Township in Washington County. This was the second Pittsburgh-area state senate seat to flip into Democratic control since 2018.

But what led to the vote shift?

University of Pittsburgh election analyst Lara Putnam says it was a mix of backing by organized labor and grassroots progressives. She says that combination has also proven effective in victories for politicians like U.S. Rep. Conor Lamb (D-Mount Lebanon), and could be a playbook for Democrats in suburban Western Pennsylvania moving forward.

“The key two pieces are about labor and the grassroots,” says Putnam. “The people that are in labor households are the not the same as the grassroots that entered after of Trump, and they haven't looked back since. Those networks were laid and they didn’t skip a beat.”

The grassroots shined in Mount Lebanon, the district's most liberal area. Iovino was able to build up large margins in the borough, and Democrats may have even exceeded their expectations here.

Lynne Hughes, a progressive grassroots organizer in Mount Lebanon, says that in the Howe precinct of Mount Lebanon, organizers were hoping for Iovino to secure 64 percent of the vote, but she exceeded that with 69 percent. Hughes also notes turnout there was about 40 percent, which is high for a special election.

"There was a disproportionate high turnout in Mount and high win proportions there,” says Putnam. “Mount Lebanon getting high turnout was not surprising, but they still made it happen. Even better expectations.”


Here is a comparison between 2019 and the last 3 races in this district. Iovino and Smith won by similar amounts, but look at the geographic spread. Mt. Lebanon really punched above its weight. pic.twitter.com/wMps6IfQDn

But it wasn’t just racking up votes in the reliably Democratic Mount Lebanon that led to Iovino’s victory, says Putnam. She says generating votes from labor union families throughout the district was also important. Turning out votes in middle-class, union-supporting households in Moon and Upper St. Clair was critical in stemming the tide of the conservative wave that supported Trump in 2016.

Putnam says towns near Allegheny-Washington county border have historically supported Republicans and did so in large numbers in 2016. But when given an option like Iovino, Democrats have made gains in these areas that help propel their candidates to victories.