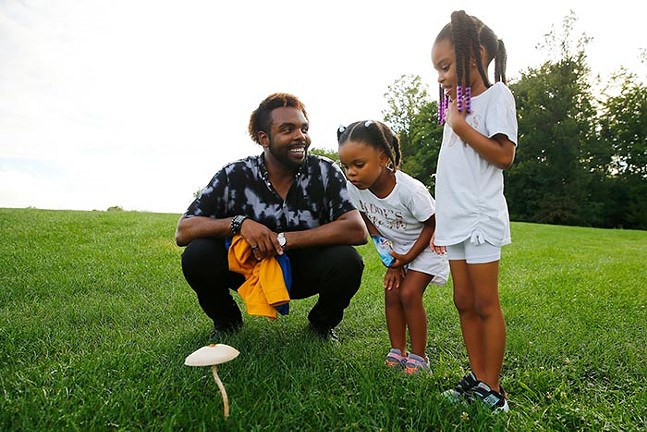 Every morning, I wake up to an alarm. The alarm is not always the same; sometimes it’s my Samuel L. Jackson Alexa app and sometimes it’s someone saying, “Daddy, wake up.”

Wait, did someone really call me “Dad?”

Since I was young, I’ve known that I wanted to grow up to become a comedian, an actor, or a musician. But I had no clue the kid who wore cowboy boots in the hood, the one who was called “not Black enough,” would ever be called “Dad.” The guy with depression, anxiety, body dysmorphia, and PTSD is a dad? Crazy to think when I never wanted kids.

God, however, knew I needed them to save my life. I am forever thankful the universe trusted me with this task.

PublicSource and Pittsburgh City Paper partnered to co-publish this first-person essay
I’m from Pittsburgh like Michael Keaton, and I thought I would grow up and be a Michael Keaton character. I thought I would be a rich playboy like Bruce Wayne, full-on Batman mode until my 50s. But I have become Mr. Mom to my daughters Aeris and Channing, aka “Baby Thanos, the destroyer,” and even my Maltese (also a girl).

I’m not complaining; every moment with them is a reminder of survival.

I try my best to shield my children from experiencing the same things I have. I grew up around love and a lot of family. I had both parents growing up. But my parents worked nights a lot, and my sister was 11 years older and already living elsewhere. I had to learn how to survive. I learned toxic behavior and took on a “deal with it” mentality.

I was bullied a lot for being chubby, jumped and spit on for being fat. I was either not Black enough or too Black. I lost my first friend at age 9 to gun violence and never realized the effect it had on me until firecrackers and gun ranges made me freeze. I didn’t realize the abuse I received from an adult female family member until I would flinch when a woman would reach for a hug or just pick lint off my shirt.

It took a lot of courage to look for support. The Black community and past generations were not big on seeking professional help. The message always seemed to be to pray your mental illness away and blame the devil for everything.

Growing up, I watched so many struggle with mental health, and I often wonder what the outcome could have been if they had support.

CP Photo: Jared Wickerham
Terry Jones and his daughters
I first started therapy in 2013. I had no clue how many years I had depression at first, but looking back, I realized it was in my teens when I first realized something wasn’t right — 10th grade to be exact. I would sit in a dark room and think about how unhappy I was. I found that a lot of adults would look down on issues facing children and teenagers mainly because they have already been through it all themselves. That’s not a helpful mindset to a struggling kid.

By the time college started, my depression was really bad from so much trauma. I didn’t have many people to talk to about anything. I would put a sheet over the window and sleep during the day. During this time, I was working security in dangerous clubs. I was 18 and 19 years old, telling my boss I was 23 so I could keep the job and make money. I was surrounded by so many people dying or getting locked up. Therapy felt like a wave of painful truth I needed to heal. I had to learn about the root cause of my issues.

I even realized I built humor as a form of self-defense. I would roast people so bad as a kid. People hated to have rip sessions with me. My humor was a way of making people like me. Sadly, I would make this a career choice without realizing the damage it was taking on me. When I was dealing with the depression I had no clue I had as a teen, I would listen to Richard Pryor albums from my dad’s new box set on repeat until I became 18 and would try to emulate his comedy at the Pittsburgh Improv open mic. I was looking for love to cope with feeling hated for so long. The worst feeling was feeling empty: the feeling you get coming down from a high.

As I gained success in my comedy, I’d make 400 or more people laugh at sold-out shows. I was left feeling empty and alone. I developed a drinking problem in my early 20s. Now that I am 12 years sober, I can look back at the reasons. The pressures that haunted me as a kid bled into my career. My therapist helped me learn tools to help myself. Taking a risk and seeking the support I needed was paying off. I had trusted someone to help the broken kid. I just had no idea that he also needed healing. Sadly, the therapist who was helping me took his own life. I was thankful he helped me to at least get in a better head space, but I was hurt and wondered if any of the many sessions like my own triggered him.

Battling suicidal thoughts and attempts, I credit fellow comedian Matt Light for coming to the Roberto Clemente Bridge and preventing me from acting on an attempt. I had to keep swinging.

My first daughter, Aeris, was born the same year, in 2015. I was scared to become a father and was not ready. Who knew there is no such thing as being ready to be a parent? As soon as I laid eyes on her, I knew she would make me spend all my money at Five Below.

Even while struggling with self-hate, I knew I now had this person with my DNA staring at me and expecting me to help them stay alive. The love I felt from my daughter felt like sorcery.

I had never loved this much; I had a reason to keep fighting. My second child, Channing, was born in 2017. By this time, I felt ready to be a dad. I grew up with two parents, so after their mother and I split, it was really hard to get used to. I wasn’t raised this way. But I made a promise that no matter what, I would be the best father the universe could give them. Thank God, Mom and my grandmothers taught me how to cook and clean. 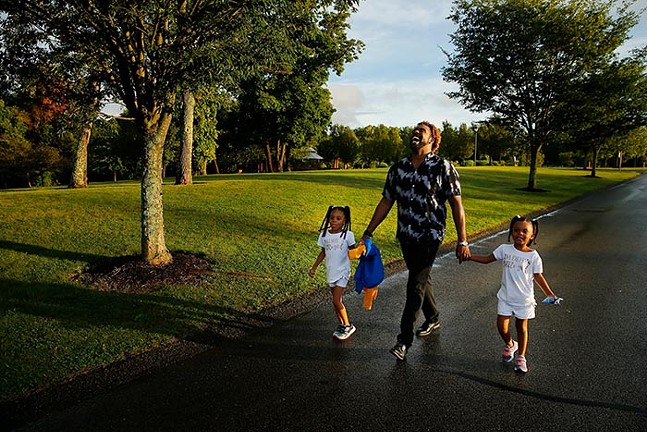 CP Photo: Jared Wickerham
Terry Jones and his daughters
I always thought comedy was the answer to filling the void of love in my life. I thought relationships were the answer to the path of self-love. Expecting partners to lift me and help me figure myself out was a bad mentality. The path to self-love and awareness was out of caring for these little people I had basically just met. How could I love this much and be loved equally? No pressure. Just pure love and laughs. I had the responsibility of caring for my children. I guess this is how Eddie Murphy felt in “The Golden Child.”

I can’t explain it, but these kids are saving my life. By not focusing on the dread of things that happen to me, I focus on fixing them to protect my children.

I started finding more healthy entertainment outlets like music. The ego and self-loathing of comedy has limited appeal to my soul anymore. My depression, anxiety, PTSD, and body dysmorphia still exist. But now, I have a stronger hold of it. If I hadn’t of worked on myself (and I continue to do that work), I wouldn't be here today to enjoy all these great moments of fatherhood.

Before my grandmother passed away in 2018, she told me about how she also suffered from depression, which pieced a lot of things for me together. There is something else she told me: She said you are not alone in your fight.

Every day that I smile, chase my kids, and enjoy their hugs and WWE-styled daddy chants when I pick them up from daycare, I think, “God sent me two angels to help me fight back against the demons that plagued me.” I realize Grammy was right, I am not alone in this fight.Terry Jones is a comedian and musician who lives in Pittsburgh with his two daughters. Follow his work at linktr.ee/TeamTerryPro.

This essay was made possible with financial support through the Pittsburgh Media Partnership. If you or a loved one are in need of immediate support, help is available 24/7 at the National Suicide Prevention hotline: 800-273-8255.