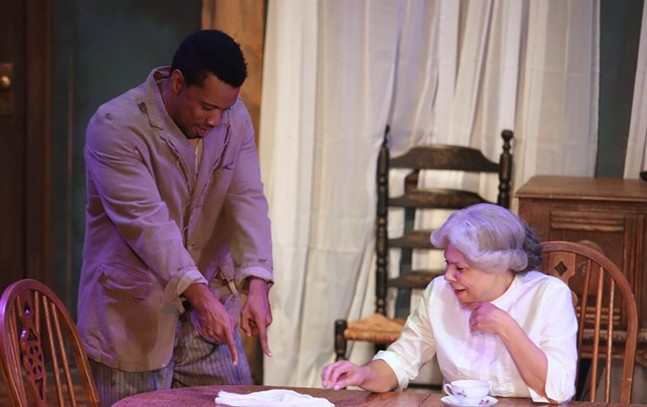 Photo: J.L Martello/18ricco
Pittsburgh Playwrights Theatre Company production of Gem of the Ocean
Usually, the only time craft beer and theater go together is when patrons sip a brew before a show. But another connection emerged recently when Mike Potter, one of the co-founders of Fresh Fest, a local event dedicated to showcasing Black brewers, gave a helping hand to the Pittsburgh Playwrights Theatre Company (PPTCO).

According to the company’s founder and producing artistic director, Mark Clayton Southers, Potter put out a call on Facebook asking if any non-profits needed $5,000.

“I thought it was a joke at first, but I sent him a message just in case,” he says. “I guess I was the first one to get back with him, and he had a distributor that works with him that wanted to make a donation to a local group.”

That $5,000 doubled when PPTCO’s board of directors matched the amount. As of last week, all of the money went to supporting ten projects, nine by new playwrights and one existing work.

The move comes after PPTCO announced it would postpone the opening of its 2019-2020 season’s third and final play, the world premiere of Dr. Kyle Bostian’s Pyramid Builders, which is one of the grant recipients. Instead, it will open the 2020-2021 season beginning Sept., 2020.

While unexpected, the grant program enables PPTCO to continue its mission of nurturing new playwrights as construction continues on its Downtown performance space. While he can only go by rumors, Southers says much of the delay is due to the remodeling of the third floor, which he believes has become more expensive than the theater’s owner, the Pittsburgh Cultural Trust, anticipated. Some of the improvements, he says, include new fire escapes and bathrooms, as well as some external work.

“I think they’re in the process of reorganizing how they’re going to do the remodeling, and everybody is going to have to be out of the building when they do it,” says Southers. “Plans changed, basically. We’re not upset about it. It is what it is. [Pittsburgh Cultural Trust] subsidizes us. We wouldn’t be able to survive as a theater company in Downtown without their help. We’re very grateful to have them as a landlord.”

As a result, many of the grant-funded plays will take place at other locations throughout the city this spring. According to a press release, this includes the play Death Dream by Ty Greenwood, which is set to be performed on April 3 at Kelly-Strayhorn Theater’s Alloy Studios in East Liberty. Lissa Brennan will present 1941, the second part of her Grist From The Mill storytelling trilogy, at the Carnegie Stage. The August Wilson Society also received funds to support its production of Wilson’s autobiographical work, How I Learned What I Learned, at the August Wilson African American Cultural Center.

Southers says the Alumni Theater Company (ATC) received two grants to put on its ATC New Works Showcase and the eponymous stage adaptation of Sharon Flake’s novel, The Skin I’m In, described as depicting the story of seventh-grader Maleeka Madison, “who has low self-esteem because of her dark skin color.”

The change of locations isn’t unusual for PPTCO given that the company has presented Wilson’s Gem of the Ocean on an outdoor stage in the Hill District over the past few years.

Grants also went to Kimberly C. Ellis, PhD, Jamaica Johnson, and Judy Meiksin for their work-in-progress plays, as well as Deonna Dykes, whose play Black History Month: A Homage to our Ancestors is being performed from Sat., Feb. 29-Sun., March 1 at the Pittsburgh Mennonite Church.

"We want to give our patrons options for things to do and places to go to see Pittsburgh Playwrights in action, so this makes sense," says Southers. "But I just think it’s money well spent."