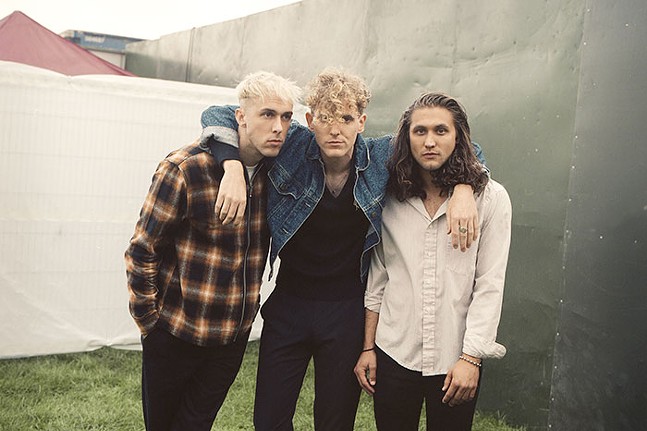 Chase Lawrence remembers seeing fun. and Panic! at the Disco at Stage AE when he was 16-years-old.

“It was a defining show for me,” he says. “I remember watching that show and thinking, ‘I want to play here one day. This is what I want to do.’”

Now, Lawrence and his band COIN are gearing up to play Stage AE, supporting a joint Young the Giant and Fitz and the Tantrums show, this Thu., June 27.

COIN, an American alternative band adjacent in sound to Panic! And fun., originated in Nashville, Tennessee in 2012. The group, perhaps best known for the 2016 track “Talk Too Much,” currently has two albums, released in 2015 and 2017. These days, drummer Ryan Winnen and lead guitarist/supporting vocalist Joe Memmel round out the band with Lawrence.

The day Lawrence spoke with City Paper, COIN officially dropped its new single, “Crash My Car." Lawrence spent a lot of time torturing himself with worries about the song over the past year and a half or so, he says. However, the day of its release, he sounded pretty upbeat.

“‘Crash My Car’ has taken every piece of my subconscious for the past year,” says Lawrence. “I’m happy to let it out in the world, let it go, and move on. It’s a special day. I’m excited.”

The song was unintentionally inspired by a woman Lawrence met at one of his shows in Oxford, Miss. She was in a car accident before the concert, but still made it to the show.

“She’s like, ‘My car is not important. I only want to be here with my friends, this band. This is way more important than any possession I have.’ And it hit me right there,” says Lawrence. “That’s what this is gonna be.”

He went on to reworking the music, and this interaction helped form the message of the song.

He obsessed over the "Crash My Car." There were little things, like a tempo change in the chorus that he didn’t love at certain points, but the big concern was that he didn’t want anyone to think they were making light of car accidents.
The track is upbeat, arena pop, not exactly the tone you expect from a song about a car accident. The ambitious, singalong chorus goes, "You can crash my car tonight / go out wasting all my time and money / I love the way you're breaking my heart / and I can't stand to see you leaving lonely."

“I knew how big the chorus sounded, and I was so scared of it,” says Lawrence. “I knew it sounded like I could hear thousands of people singing it, and it made me not want to touch it and not want to finish it because I was a little nervous about it.”

The release of “Crash My Car” also marked the announcement of the band’s long-awaited third album later this year. The new album is essentially a journal of the band’s last two years, Lawrence says. They worked on the album in places like living rooms, bedrooms, and the bus.

Explaining how he moved past difficulty of writing “Crash My Car,” Lawrence points to a sense of letting go of perfect fidelity and pedantic details, and coming to accept the authenticity in their music.

"We’ve learned to trust our gut and instincts,” says Lawrence.