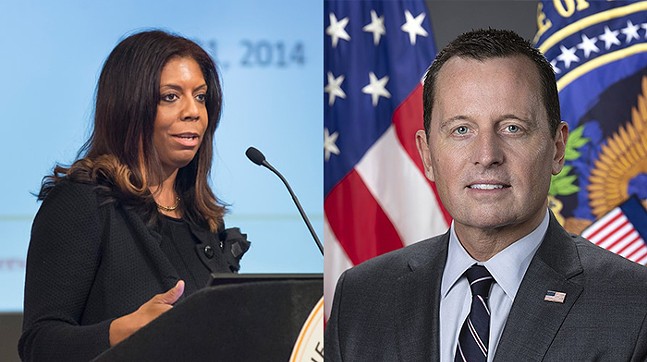 Last Wednesday, while rioters broke into the Capitol building in Washington, D.C., Kiron K. Skinner, director of the Institute for Politics and Strategy at Carnegie Mellon University, sent out a press release congratulating its Senior Fellow Richard Grenell on an award he received from President Donald Trump "for his work on normalizing economic relations between Serbia and Kosovo." The press release went out less than an hour after the rioters breached the Capitol building.

In a series of emails following the press release, photos of which were posted on Reddit, and whose accuracy was verified by the Chronicle of Higher Education, who first reported this story, Skinner defends Grenell and implies people have a right to question the 2020 election results as invalid, saying "fraud happens in all elections." She conceded in the emails that she made "process fouls” in terms of the timing of the email, but denied that Grenell could have had any influence on the events at the Capitol.

In June, Grenell, former ambassador to Germany and former acting Director of National Intelligence under the Trump administration, was hired as an Institute for Politics and Strategy (IPS) fellow at the Pittsburgh university. The hiring prompted immediate backlash from both students and faculty at CMU, including through petitions and open letters. In a statement responding to the backlash, Skinner, who previously worked as Director of Policy Planning at the Department of State under the Trump administration, noted that Grenell wouldn't be teaching classes, but would "engage with the CMU community in a variety of forums."

Grenell drew controversy again in November, when he began spreading conspiracies about voter fraud after the presidential election.

In addition to his previous work within the Trump administration, Grenell is active on Twitter and shares his alt-right beliefs and appearances on conservative news networks. On the morning of the Capitol attack, Grenell tweeted to his followers, "Rest up and get ready to fight back." Grenell also recently retweeted his Jan. 9 appearance on Newsmax, a conservative network, where Grenell said, "Unfortunately we have only seen one side that has been consistently calling it out, and that's been the Republicans." (Nearly every Democratic politician across the entire country condemned the violence.)

At least one CMU professor who publicly criticized Grenell on Twitter, and whom Grenell responded to, fielded harassment and personal attacks from Grenell's conservative followers. The original IPS press release also congratulated Grenell, who is embraced by many conservative zionists, on being named by Trump to the United States Holocaust Memorial Council.

In a statement, CMU spokesperson Jason Mederer said that the university "condemns the incitement to violence and insurrection caused by those who cast doubt on the legitimacy of the presidential election through persistent and unsubstantiated claims of widespread voter fraud."

Mederer says that the IPS press release about Grenell published on Jan. 6 was done so without the knowledge of the school's central administration.

"On the day of the vote certifying the election, and especially once the U.S. Capitol was attacked by insurrectionists seeking to disrupt that certification in the president’s name, we thought that such a congratulatory message on a CMU website on that same day was inappropriate and potentially inflammatory," says Mederer. "That’s what we asked IPS Director Dr. Kiron Skinner to consider, and assumably, why she then made the decision to remove the article."

CMU did not respond when asked if it plans to continue its relationship with Grenell.