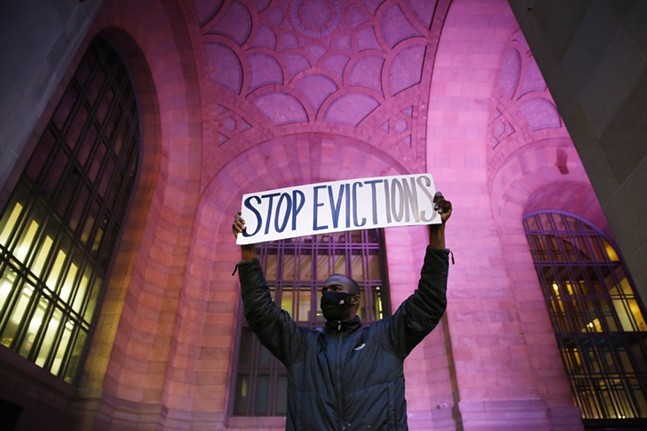 Lou, a Pittsburgh resident facing eviction, holds up a sign during a rally outside of the Pittsburgh's City-County Building in February.
WASHINGTON — Congressional Democrats are in a last-minute scramble to possibly extend federal legal protections against eviction that expired on July 31.

The end of the eviction moratorium would jeopardize housing security for millions of Americans who are struggling both to pay their rent and to access billions of dollars in slow-moving federal rental assistance funds.

It was not clear by afternoon of July 30 if the Democratic-controlled U.S. House of Representatives would hold a vote on extending the national eviction moratorium, much less the evenly divided Senate, where legislation likely would be even tougher to pass.

A letter circulated by House Speaker Nancy Pelosi’s office indicated that the chamber was working on support to extend eviction protections through Oct. 18, the date when the public health emergency declaration issued by the secretary of the Department of Health and Human Services also expires.

“It is our hope that we could pass a bill extending the eviction moratorium to that date immediately,” wrote Pelosi (D-Calif.) in the letter.

A House panel met on the morning of July 30 to begin expediting a vote, just hours before the moratorium enacted by the Centers for Disease Control and Prevention was set to expire, and before House members also were set to leave Capitol Hill for the chamber’s August recess. While the House will conduct committee work during that period, votes are not scheduled again until Sept. 20.

The Senate is scheduled to be in session again next week before leaving for recess, though with a packed agenda, including a massive infrastructure deal.

The mad-dash effort came after the Biden administration said on July 29 that it could not take action to again extend the eviction moratorium, citing a Supreme Court ruling in June indicating that congressional action would be needed to continue it past July 31.

The Biden administration had extended that moratorium in June, shortly before the Supreme Court weighed in, and at that time, White House officials said it would be the final extension of the eviction protection that has been in place since September.

In the meantime, administration officials have been attempting to help states and localities in speeding up payments of $46 billion in emergency rental assistance approved by Congress.

That money has trickled out slowly as state and local governments scrambled to administer new programs or bolster ones that had been historically underfunded.

Through the end of June, localities had distributed a little more than $3 billion of that rental aid — or only a fraction of the $46 billion approved by Congress.

Housing policy experts have warned that millions of Americans are still struggling to pay their rent, and that the end of that legal protection likely will lead to a surge in eviction filings across the country.

In a statement on July 30, Alicia Mazzara, a senior research analyst with the left-leaning Center on Budget and Policy Priorities, urged states and localities to enact their own eviction bans, and to move quickly in doling out rental assistance funds.

But Mazzara also described moratoriums and emergency rental aid as “band-aids for a much bigger problem,” urging Congress to also expand housing vouchers and take other steps to reduce housing instability.

“Millions struggled to pay rent before the pandemic, and many more will continue to struggle in its wake,” she said. “It doesn’t have to be this way.”

The National Association of Realtors has opposed extending the moratorium. Leaders of the trade group — which has spent $18 million in the first half of this year on federal lobbying, according to the Center for Responsive Politics — argued in a letter to federal lawmakers on July 29 that continuing a national moratorium “is at odds with the current climate, and will only continue to place insurmountable levels of debt on renter households and prevent complete recovery in the housing sector.”

During July 30’s House Rules Committee meeting, Republicans expressed concerns that extending the moratorium would hurt smaller landlords, who rely on income from one or a few rental properties. They also blasted Democrats for not taking action sooner to aid renters.

“This was a known and preventable disaster,” said Rep. Patrick McHenry (R-N.C.), adding that he has been raising issues with the rental-assistance program and introducing his own legislation for months. “We had a deadline to get funds out or take congressional action, and Democrats did neither.”

Democrats also signaled frustration at the rushed timing, but defended the efforts of localities to get money flowing. They argued that renters should not be penalized for failures to distribute those aid dollars fast enough.

“We can blame each other for it, but the fact of the matter is, we have an emergency in this country,” said House Financial Services Chair Maxine Waters (D-Calif.) “And the emergency is, are we going to sit back and say, ‘Let the evictions take place. It’s too bad that they didn’t work fast enough. It’s too bad that the governors didn’t get it done.’ … The fact of the matter is, children and families are going to be on the street.”

Waters acknowledged the lobbying effort by Realtors against the proposal, adding that she intends to ensure that landlords are able to “get every penny” they are owed through the rental assistance programs.
Laura Olson covers the nation's capital as a senior reporter for States Newsroom, a network of nonprofit outlets that includes Pennsylvania Capital-Star. This story first appeared in the Pennsylvania Capital-Star.