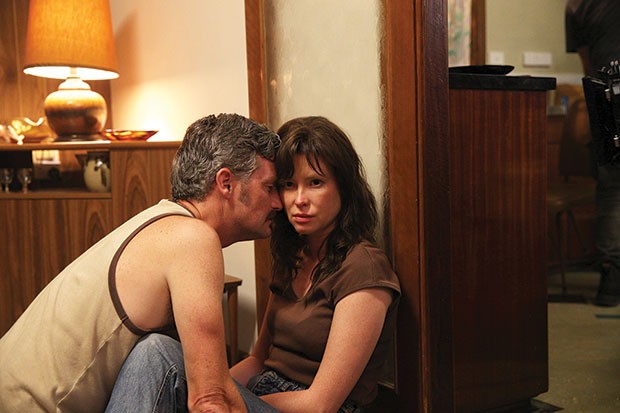 Australian writer/director Ben Young makes a strong debut with Hounds of Love, a well-constructed and deeply disturbing thriller about a husband and wife who kidnap and torture a teenage girl. The film is set in Perth, in December 1987 (a weird-to-us season of blazing sunlight and Christmas decorations), and opens with one of the film’s visual tricks, an off-kilter slow-motion scene that is languid and creepy.

Vicki (Ashleigh Cummings) sneaks out of the house for a party, and en route encounters John (Stephen Curry) and Evelyn (Emma Booth), who offer her a ride. She accepts their offer to buy weed, and winds up in their house in an ordinary working-class neighborhood. In short order, she is drugged, chained to a bed and forced, like us, to watch in horror as her kidnappers embrace passionately to “Nights in White Satin.”

Young never shows us the worst of the physical assaults — doors are closed on what we presume are torture-rapes by John — but is that any better? Like Evelyn, we wait in the other room, nervously glancing at the closed door. Nor is the emotional violence in this film any easier to process, particularly with the intimacy Young creates — physically, within the small home, and by placing us in the center of this twisted triangle.

Hounds is a tense character study rather than an exploitive torture-porn film. At first, viewers are invested in the classic binary of victim and dominant abuser, but it’s Evelyn who is the most fascinating and whose motivations are more deeply explored. Evelyn is revealed to be emotionally fragile and conflicted; she is both abused and abuser, and it’s on her that Vicki places her slim hopes of relief.

Besides exploring unthinkable pathologies, the film unpacks other issues, such as the engrained sexism and gender roles that make it harder for women to assert themselves (Vicki’s mom presents a more “normal” version of this situation), and the various power dynamics that play out between husbands and wives, and parents and children. Hounds is a compelling work, but take heed: This is a tough film to sit through — and it’s apt to stay with you.