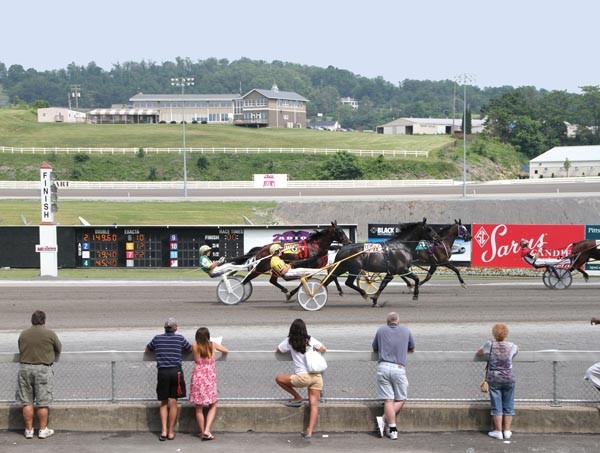 Among the potential losers in Gov. Tom Corbett's proposed budget: the horses that Pennsylvania casinos rode in on.

Corbett's budget proposes raiding Pennsylvania's Race Horse Development Fund for $72 million a year over the next three years, using the money to offset cuts in other agricultural programs. That move has upset and confused those who depend on those dollars to bolster the state's racing industry.

"I'm absolutely shocked by this because this governor talks so much about creating jobs, but this is a job-killer," says Kim Hankins, executive director of the Meadows Standardbred Owner's Association, which advocates for horse owners, trainers and drivers at the Meadows racetrack in Washington County.

The development fund was devised by the legislature in 2004, when it approved the construction of casinos in the state through Act 71 — known as the Pennsylvania Race Horse Development and Gaming Act. Under that law, 10 percent of all slot revenues were to be directed to the fund. For each dollar that went to the fund, 80 cents were allotted for race purses, 16 cents into the state's breeding program, and 4 cents into establishing medical and pension benefits for those who work in the industry, including jockeys, drivers and trainers.

And the industry has benefited, says Hankins. Bigger race prizes attracted more out-of-state operators, while those who were already here invested more in their racing stock. The state's horse-breeding program took off. In December 2010, the Pennsylvania Department of Agriculture reported that 44,000 equine-related jobs were created as a result of the state's investment.

"Because of that fund, people made an investment in this region," says Hankins. "Jobs were created because of this industry, and now we're facing a huge reduction in our funding and I'm really afraid we're going to go downhill fast.

"Our racing programs have a lot of competition now from neighboring states, and even Canada, that wasn't there when this fund was started. If we can't continue to operate the way we have been, there's no incentive for these people who invested in this region to stick around."

This is not the first time the fund has taken a hit. Since 2009, the industry has already taken a 17 percent cut in funding — about $40 million — through June 2013. So for the next year, if Corbett's proposal is approved, the industry will have to operate under an additional $72 million in cuts.

"I don't understand this at all," says state Sen. Tim Solabay (D-Canonsburg). "We turned this industry around. People invested money here and this industry is creating jobs, and now the state's going back on its promises.

"We're going in reverse and it doesn't make sense."

The redirected funding will be divvied up among four educational programs, says Samantha Krepps, a spokeswoman for Corbett's Department of Agriculture. The largest chunk — $44.7 million — will go to Penn State University for research and extension services, and $27.8 million will go to the University of Pennsylvania for veterinary activities. The remainder will be doled out to state fairs and the research of infectious diseases.

Krepps says the transfers shouldn't be controversial. The money is going to other agricultural programs, she notes. "There's still $130 million left in the fund, and that's a lot of money.

"These educational programs are vital to the state's number-one industry: agriculture," Krepps says.

But state Rep. Brandon Neuman (D-North Strabane) says the original intent of Act 71 was to provide that money to grow, improve and create jobs around the state's horse-racing industry. To now take that money to pay for other programs, he says, is "disingenuous."

"This administration has done nothing but preach about the need to bring and keep jobs in this region — and they go out and raid a fund that could potentially take thousands of jobs out of Pennsylvania," says Neuman, whose district includes The Meadows. "I'm not saying funding these education programs isn't important. But to do it at the expense of thousands of jobs doesn't make sense."