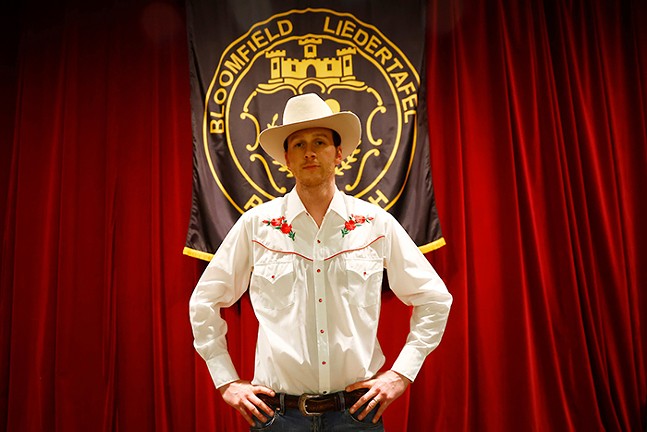 CP Photo: Jared Wickerham
Pittsburgh musician Jon Bindley
A few years ago, musician Jon Bindley and his friends Molly Alphabet and Chet Vincent, who all had busy schedules, wanted to find a way to hang out together while still playing music. They came up with the Honky-Tonk Jukebox — now a monthly dance party — where they invite other musicians to join them for an evening of country music song and dance at the Bloomfield Liedertafel Singing Society.

“We were like, hey, wouldn’t it be cool if we did something semi-regularly?” Bindley says. “I used to live in Nashville, where they have a lot of recurring jams and that’s where a lot of the Honky-Tonk story begins.”

The original Honky-Tonk Jukebox members are regularly joined by the house band, which includes guitarist Donnie Bell, Pete Freeman on pedal steel, bassist Jesse Prentiss, drummer Alex Peck, Kurt Giammattei on keyboards, and Lee Hintenlang on saxophone/mandolin. Bindley performs at each event, and new guests are welcomed every month for a mix of covers and original country songs.

While part of the energetic vibe of the event comes from the performers, the rest comes from the audience who are encouraged to dance along to the music. When coming up with the idea, the group wondered if the dance party-esque style would work in Pittsburgh.

“We weren’t sure if people were going to dance, so we put something together and gave it a shot,” Bindley says. “And almost from the first note, the dance floor was full. It’s become a place where other musicians can meet people and foster collaborations out there. So it’s just kind of like a big party every month.”

Bindley adds that the diversity of the crowd helps as well, and says he often sees older people dancing alongside younger folks. He enjoys how the shows bring people together.

When the pandemic hit, the events were halted, but in February, the show came back stronger than ever.

“I had a lot of ideas and ways it could improve musically, and just experience-wise,” Bindley says. “So just coming back there’s a new sense of appreciation for the community, and there were faces we didn’t see for almost two years. And so I think there is a deeper sense of gratitude for the spirit of the event; one that is welcoming and inclusive and a place where you hear something different every month, but at its core, it’s really all about being together and enjoying music.”

The decision to bring the Honky-Tonk Jukebox event back was a long time coming, but the crew wanted to be sure it was safe to do so. After monitoring COVID cases in the city, they decided to come back in late February when cases appeared to be down, and will have their third Jukebox show of the year on Fri., April 29.

CP Photo: Jared Wickerham
Pittsburgh musician Molly Alphabet
Bindley says Molly Alphabet will make her return this month, her first show back since before the pandemic, and they’ll be joined by jazz musician Avi Diamond, a singer/songwriter and multi-instrumentalist.

Not everyone is into country music, Bindley says, but he encourages people who may think they don’t like country music to give the Jukebox a shot.

Bindley says the cool thing about the event is that it is not just one kind of country music — they do perform traditional country music, but also some boogie-woogie and soul as well.

“I would say that my hope is that people maybe walk away feeling like if they’re one of those people that don’t like country music, that maybe they just hadn’t found the right kind of way to experience it,” he says.

He adds that they will even sometimes have people perform who aren’t country artists, but who just want to try something new.

“I think a lot of our artists and guests we’ve had have not been country artists, and they pick a country song and learn it and are like, ‘Oh, I actually really liked this.’ And that’s fun to bring people in from other genres and other scenes.”

Bindley says he’s excited to see the turnout as the event continues to grow.

“My hope for the event is that it becomes something that people will circle on their calendars every month and they know that they can show up, whether it’s for an hour or the whole night,” he says. “They can show up and dance and drink an Iron City and feel like they’re a part of something that is authentic.”

He adds that the event is “DIY top to bottom,” with the musicians performing, promoting the event, and handling production and sound. “So when you support this event, you are supporting the people that make it happen, which is really nice and refreshing.”

Clara Kent ushers in the holiday mood with "Winter Song"