“We’re losing approximately 40 percent of our bee population every year.” 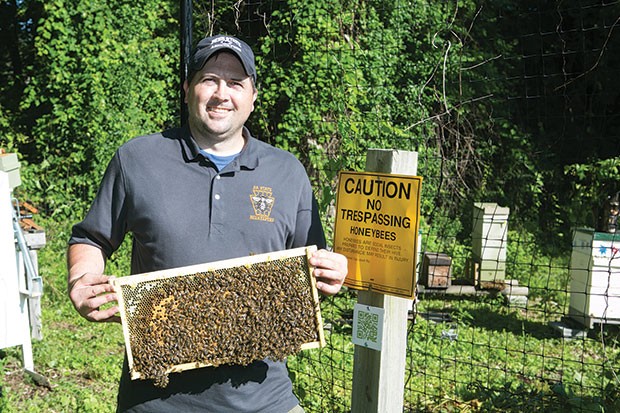 Stephen Repasky, president of Burgh Bees, an organization that promotes honey bees and the beekeeping industry, gets calls about this kind of bee activity often. But the swarms are mostly harmless, he says. They’re just looking for a new home.

Repasky is a second-generation beekeeper who grew up on a farm in Armstrong County and started learning about the process from his father at age 4. As part of his work with Burgh Bees, he strives to make people less afraid of bees and to give them an understanding of the insects’ many contributions to our ecosystem.

“Honey bees are very gentle, they’re docile. They’re not going to bother anybody unless someone bothers their hive,” Repasky says. “Honey bees are responsible for over one-third of the food we eat. One out of every three bites of food can be attributed to pollination by honey bees. There’s so many things they do, from building their own wax to producing honey.”

But unfortunately this year, bees were officially added to the list of endangered species in the United States. According to the U.S. Fish and Wildlife Service, there has been an 87 percent decline in the species population since the 1990s.

The process of dividing hives is what creates the very swarms some were afraid of earlier this month, and it’s key to helping bees replenish their numbers. During the process, a queen leaves the hive with half of the population to create a new colony. The remaining bees at the hive then choose a new queen through a process reminiscent of the HBO series Game of Thrones: The potential queens fight it out, and the surviving bee reigns.

“Swarming occurs in the springtime because that’s when there’s a lot of nectar available. If they split up and swarm, that swarm has a greater chance to survive because there’s lots of food sources out there,” Repasky says. “It’s a natural occurrence. It’s as natural as a robin building a nest on your porch.”

But since this process isn’t enough to save the bees alone, Repasky focuses his efforts on the manmade causes of bee decline

“Call an expert before you spray anything,” Repasky says. “You don’t want to destroy a honey-bee colony if you can prevent it.”