The dinner menu brings a variety of sophisticated fare, as well as popular burgers

CP photo by John Colombo
Pan-seared marlin, on a bed of onion risotto, topped with sautéed fiddlehead ferns and finished with strawberry gel

We’re happy to say that it’s no longer big news when a good eatery opens on Eighth Avenue in Homestead. The idea that the big-box retail mecca nearby would trickle down benefits to Homestead’s moribund main street long ago became an eye-roller. The recent activity is more likely the outcome of a resurgence of interest in traditional downtowns, generally. But whatever the reason, the activity on Eighth Avenue is real.

And there’s Honest John’s, a bar and restaurant that goes beyond the abject humbleness suggested by the name. The lunch menu is mostly sandwiches, but dinner brings more sophisticated fare, from Cobb salad to ceviche to bread offered with an array of gourmet spreads. Though a fairly short menu, it’s long on variety.

Another thing Honest John’s has plenty of is space. The restaurant spans three storefronts, all open to one another on the interior: one containing the bar, some high-top tables and a delightful, magnetic, giant wall-mounted Scrabble board; another with bright lighting and an au courant gray-and-white paint scheme; and the third, a dimmer, more intimate dining room with exposed brick and Edison bulbs.

We gravitated to the third room and proceeded to debate which of the nine spreads we’d order with our breads. Smoked-marrow butter appealed; so did roasted-black-garlic purée. In the end, we chose curry eggplant, whipped rosemary goat cheese and herb-infused olive oil. They came on a big board piled with sliced baguette and crispy, seasoned pita chips. The chips were tasty, but had too much of their own flavor to showcase the olive oil; they even overwhelmed the creamy chèvre. Both of these were excellent on the bread, though. The curry eggplant was a letdown, with a peculiar egg-salad-like texture and not enough smoky eggplant flavor to back up the curry.

Quesadillas are a popular starter, but most places cut them into big wedges that don’t exactly match appetizer portions. Honest John’s goes smaller and smarter, serving up triangles only a bit bigger than a tortilla chip — but much, much fatter. Tender, braised short rib packed plenty of flavor, spiked by sliced jalapeño and a pico de gallo that, perhaps in deference to the season, was more onion- than tomato-heavy. Cilantro créme was a nice upgrade from sour cream.

Mussels are available in appetizer or entrée portions. Angelique chose the latter and was nearly overwhelmed with what might have been two pounds of shellfish. The menu called the preparation “mariniere,” which usually denotes a simple broth of white wine, garlic, lemon and herbs, but the kitchen went above and beyond, adding tasty jalapeño-chicken sausage and roasted red peppers. To soak it up, there was the most extraordinary bread. Again, the menu’s mention of “focaccia” was woefully inadequate for the darkly colored, yet lightly crispy, peppery-flavored, seemingly oil-infused squares. They were almost … juicy: Wow.

Other diners were getting burgers, which we took as a recommendation. But our bacon cheeseburger didn’t really stand out. While the bacon was crispy, the cheddar sharp, the meat itself the sort of thing that, just 10 years ago, would have qualified as a good bar burger, but now leaves one longing for a richer, beefier patty. We should note that the house burger — one of a few pre-composed topping combos — might have stood out more with its tomato compote and crispy onion. Accompanying fries were super-crispy and tossed with a tasty seasoning blend.

Fortunately, John’s doesn’t stand on its burgers alone. Crispy pork belly, available at lunch and dinner, looked like the kind of dish you’d find at a top-notch burgeria. Pulled pork was piled atop half a toasted bun, surmounted by a sunny-side-up egg. Then things got deconstructed: two big, thick triangles of pork belly, crisped on all sides, in the middle of the plate, flanked by a mild, savory barbecue sauce on one side and a bright green chimichurri on the other. It was original, and it worked. Our only quibble was that the pickled onion’s contribution, while tangy, was a bit subtle.

Service was friendly, but slow, giving us plenty of time to work on our giant Scrabble game. Even though this passed the time, we should never have to wait long just for menus. One server, plus one bartender, might simply be inadequate to the number of tables.

Notwithstanding that, Honest John’s is a solid anchor for Homestead’s gradually reviving downtown scene: attractive, appealing and welcoming to all.

Burgers in the Pancake House 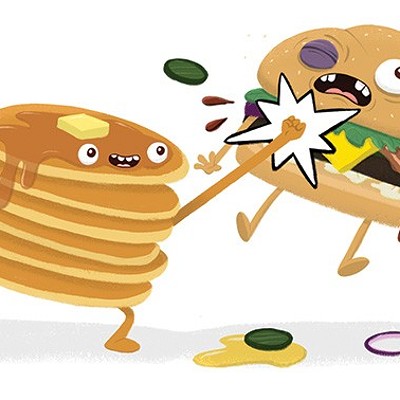