“I recommend adding lots of fresh parmesan and bleu cheese, though really, any kind of cheese will make a potato exponentially tastier.” 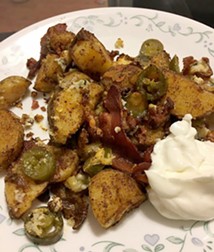 Photo courtesy of Kelly Andrews
Delicious things to cry over

Last week I made homemade French fries and then videotaped myself crying while eating them and uploaded it to Instagram (@zecatsmeow). The weeping had nothing to do with the level of spice, nor appreciation for my ability to make a decent potato. It was the kind of crying that comes after spending many meals alone in a large, bare dining room where the only sound is one’s own chewing and the clank of fork against plate. This week, I added toppings like bacon and jalapeño peppers and managed to keep my eyes dry despite feeling malaise from the lack of sunlight, general existential dread, and the fear I’ll never experience a healthy, romantic relationship before dying, which is likely to be any day now what with things like the threat of North Korea. I recommend adding lots of fresh parmesan and bleu cheese, though really, any kind of cheese will make a potato exponentially tastier.

Set a medium pot of water to boil and scrub the potatoes clean, leaving the skins on. Boil for approximately 30 minutes. For a real French-cry kind of dish, you can listen to Edith Piaf’s “Chanson Bleue” on repeat or queue up Amélie if you’re feeling slightly hopeful, like maybe there is another weirdo out there who cries a lot while doing things like weeding a garden. Once the potatoes have cooled enough to handle, cut into wedges and put in a bowl with a lid. Add olive oil and spices, secure lid and pretend you’re using a Shake Weight for 30 seconds, which if you’ve ever used a Shake Weight is about how long anyone lasts. Spread potatoes onto a pan and bake for 10 minutes at 450 degrees. Flip the potatoes and add cheese and other toppings. Bake for another 5 to 10 minutes. Substitute Greek yogurt for sour cream so you have one less thing to feel bad about.