"I want to make a documentary that encourages people to go out there and make art." 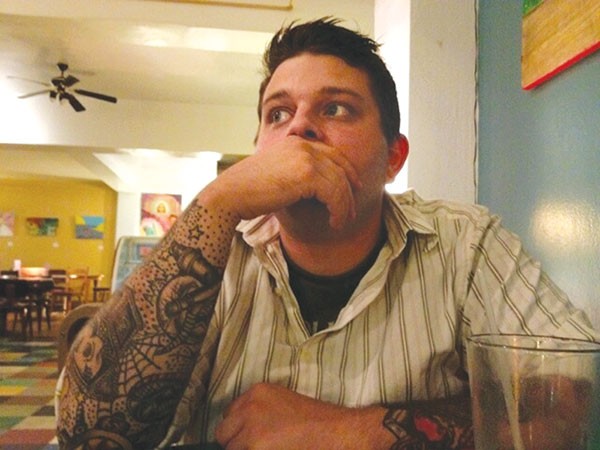 Finding a way: Derek Zanetti of The Homeless Gospel Choir

On a recent weekday morning, Derek Zanetti — the solo artist known as The Homeless Gospel Choir — was on a mission. He had boxes of the newly pressed LP of last year's Luxury Problems, with messages written on them: "Folk/Punk.org's number 6 record of the times." "For fans of Metallica, Lisa Loeb, Black Flag and Bjork." He was taking them to local record stores hoping to consign the records, in the boxes.

Zanetti does things a little bit differently. The Pittsburgh native worked in the music industry for a short time, tour-managing for a big indie label, and grew tired of it pretty quickly. The business isn't really his style.

"I lost a little bit of heart" while working in music, he says. "I just thought, 'This is what it really is?' I'd see a band get paid $1,400 a night, but the band itself would end up getting such a small cut of that."

He decided to live — and document — an alternative approach to music. He started playing as The Homeless Gospel Choir in 2008, at first in small DIY spaces like 222 Ormsby, Garfield Artworks and the Mr. Roboto Project. Then soon enough he moved to bigger venues, and opening for acts like Frank Turner. His music is well written and pointed, about politics and issues. "I try to think of a song that I wish existed," he says, "then write that song." He came up on local bands like Aus Rotten, and notes that Pittsburgh has a tradition of music that's message-based. He tours regularly, with music as his main gig — but he does it on a shoestring, booking and publicizing himself.

Last year, he had the idea to make a documentary about his enterprise, and through Facebook enlisted friends with experience in filmmaking to follow him on tour, documenting everything onstage and behind the scenes. The filming begins on a tour that starts this weekend in Mansfield, Ohio.

"Touring is possible," he says. "There's a way to do it; you don't need a label, a manager, lots of money. I want to make a documentary that encourages people to go out there and make art."