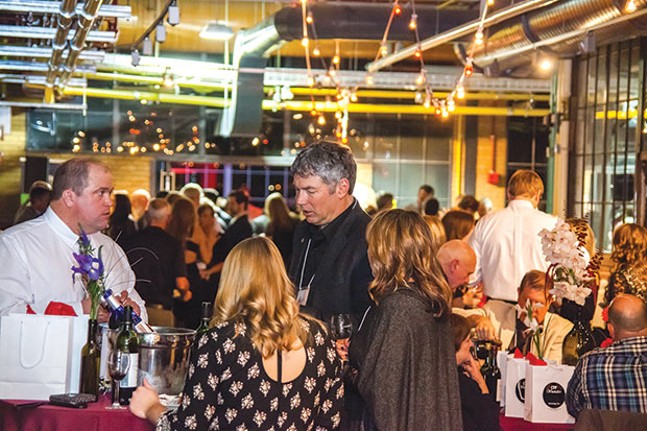 Frank LaValle steers me into a long corridor, echoing with the sounds of glasses clinking and laughter. “Come on, I’ve got to introduce you to my cousin. He makes the best wine,” he says as we move through the crowd. I had met LaValle two minutes prior as I was taking off my coat, and asked if he wouldn’t mind discussing the event we were stepping into: the Consumer Fresh Produce Winemakers 3rd Annual Wine Share, held Jan. 20.

The Wine Share is a place for Pittsburgh’s (largely Italian) home winemaking community, hobbyists and a few professionals to come together and share their wine, swap stories and advice, and engage in some friendly competition. There’s also an abundance of homemade sopressata and good ol’-fashioned smack-talk.

Last year, while researching the home-winemaking community, I was led straight to Ron Casertano, the general manager at CFP Winemakers. “Uncle Ronnie,” as he’s affectionately known in the local winemaking community, has been working for CFP for 41 years and has gained quite the following. Most of the the people I talked to at the Wine Swap credit him with sparking new life and interest in home winemaking in Pittsburgh. Midway though the event, Casertano gave a speech, most of which was dedicated to thanking the various winemakers for their participation, very sweetly crediting his wife with his success, and talking up charitable endeavors in the community. The friendly catcalls from the crowd and the thunderous applause of the guests made it apparent why Casertano is an honorary uncle.

Diving into a space where many of the participants are so closely knit can be a challenge. “You just gotta approach tables, meet the people, talk shop and drink their wine,” says LaValle, weaving his way through the tables, greeting friends along the way. His family’s table is full, with his son, cousins and their spouses. Winemaking is a family activity for the LaValles and many Pittsburgh Italians, and that’s reflected in the swathes of guests with the same last names milling around.

Patrick Nudi, LaValle’s cousin, is the current host of the family’s winemaking pursuits. He has proudly garnered some gold medals from the Amateur Wine Competition at the American Wine Society Pittsburgh Wine Conference. His label, “Due Famiglia,” denotes both the LaValle and Nudi sides. “I started 30 some years ago with Frank’s [LaValle] father down in a warehouse in Monongahela,” he says. Two other labels made by family adorn the table: LaValle Wines from the LaValle side of the family and one that LaValle calls “The Seven Clowns,” which is a collaboration between him and some high school friends. Nudi estimates they probably make about 3,200 bottles of wine a year. “It’s just a family thing, being Italian. You grow up with it. You’re allowed to taste wine at the table at young age.

“[My] grandfathers and uncles made wine, and when I was young I saw the whole process,” he says. The family also makes spicy sopressata, a dry-cured, coarsely ground pork sausage, and were delighted when challenged by another group to compare it to their own.

While the gregarious openness of the LaValles may be exceptional, their story in Pittsburgh’s home-winemaking community is not. As I spoke with numerous families at the Swap and remembered my experience helping a local family, the Argentines, with their winemaking process last year, it became clear that keeping up this tradition is part of the daily life of many families in the area.

It also serves as an important connection point to their history and their current family life.

The quality of wines at the event runs from simple traditional table wine to high quality fine wines, with many of the millennial generation of producers taking classes in food chemistry and applying modern methods to an Old World process.

The home-winemaking community is also inspiring a few of its members to go professional, like Duane Rieder, owner of Engine House 25 Wines in the Strip District. Rieder started making wine in 1992 with his neighbor and friend in Bloomfield, Nino Tolomeo, and opened Engine House Wines in 2009.

“I started the same way Uncle Ronnie did and everyone else in the room,” he says. “We would go down there [the Strip District] at midnight when the trains would come in, and eat the grapes and go, ‘Oh we want to try this or that.’” He and Tolomeo would buy the cheapest grapes and make “dago red” (“I’m half Italian so I’m allowed to say that,” says Rieder.) But Rieder soon wanted to experiment with new varietals and offered to pay to upgrade their grape selection. Tolomeo balked and told Rieder he’d have to make it by himself then and said he “wouldn’t make one barrel.”

Years later, Rieder is running his own cellar. But he’s never forgotten where he started or who got him his beloved 100-year-old wooden wine press from a Calabrian woman for the promise of two bottles of homemade red wine and sopressata. “Nino Tolomeo,” says Rieder, grinning.