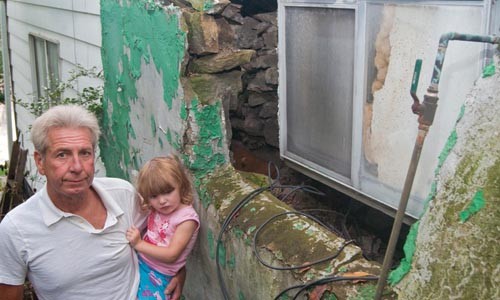 David Roman
Jack Ingoldsby, with his granddaughter Abby, outside his Ivondale Street home, where the foundation has shifted due to landslides.

In 2004, the diagnosis for Ivondale Street was grim.

Back then, city officials knew the narrow street had long been crumbling into homes below -- the result of landslides that were a common threat to the steep Greenfield hillside supporting Ivondale.

Judging from a Sept. 28, 2004, letter from a city engineer, the street's stability issues weren't something the city took lightly. Fred Reginella, the city's former director of engineering and construction, told city officials that his department had been aware of slope failures on the hillside for several years.

"Since that time, however, the situation has become direr inasmuch as there are now several locations along the street exhibiting significant slope failure," Reginella explained in the letter. "I am now convinced that the situation on Ivondale Street is irreparable. I recognize the boldness ... of what I just said."

Reginella wrote in his letter: "Can the City buy out these houses and close the street?"

Nearly six years later, that question has yet to be answered.

Ever since Ivan, roughly a dozen residents living above and below Ivondale Street say their cries for help have been met with lots of words and little action from city officials. "I'd like to stop hearing them talk already," says Arlene Kolesar, 74, who lives with her husband in a home just below Ivondale Street. "Nothing's getting done."

In May, Pittsburgh City Councilor Doug Shields, who represents Greenfield, helped create a task force, composed of residents and city officials, in hopes of pressuring the city to finally remediate the situation on Ivondale. But while city officials are refocusing their attention on the Greenfield hillside, it's still unclear how much longer residents will have to wait for a resolution ... and how much it will cost the city.

"I'm just so tired of this," resident Dorothy Cribbs, 59, said at a July 13 task force meeting. "By the time [the city] resolves this situation, I'm gonna be dead."

Pittsburgh's hills are no strangers to landslides. In fact, says University of Pittsburgh geology professor Thomas Anderson, the city ranks in the top five of landslide-prone cities in the country.

"It's a combination of steep slopes and lousy rocks," he explains.

According to Anderson, Pittsburgh's hillsides suffer mostly because of the region's clay-rich rock strata. These so-called "red beds" are very weak and susceptible to landslides. When it rains, he says, the clay absorbs water and becomes "slippery as the dickens." And over time, the hillsides destabilize.

Jack Ingoldsby knows exactly what Anderson means. Standing on Ivondale Street, Ingoldsby points to the edge of the road where chunks have actually broken off and fallen into his yard below. "This whole hillside is moving," he says.

Ingoldsby's basement wall has shifted a full foot askew from the rest of the home. "Look at my foundation," he says. "Do I got a problem?"

The condition of Ingoldsby's house has gotten so bad, in fact, that the Ivondale Street resident of 35 years recently moved out of the house to live with a relative.

Ingoldsby says the situation never should have gotten to this point, especially since the city knew about the problem.

After Reginella's 2004 e-mail outlining his concerns about the hillside, engineering firm D'Appolonia published a report in January 2005 analyzing the conditions on Ivondale. "It is quite possible that support for Ivondale Street will eventually be lost ... as a result of slope instability," the report cautioned.

The city did nothing.

"We didn't have the money for [repairs]," says Patrick Hassett, assistant director of the city's Bureau of Transportation and Engineering.

According to Hassett, there are more than 20 hillsides that the city is monitoring for landslides. Altogether, he estimates that repairs would cost roughly $9 million. (City Paper requested a current list of all the city's landslide-prone hillsides, including cost estimates for slope remediation and buy-outs for each, but Hassett declined, saying the list was not current.)

Landslides, which aren't covered by homeowners insurance, become the city's problem when they threaten city property. Like a public roadway, for instance. "If we can't maintain the roadway," Hassett says, "we're responsible for [the properties on the street.]"

In cases where city property is at risk, Hassett says, the city typically has two options: The city can either buy out homes and demolish the houses, or it can stabilize the hillside.

Recently, he says the city bought out two rental properties on Corfu Street, in Elliott, and it's currently in the process of buying out some homes on Portman Street, in Observatory Hill. (It's unclear how much buy-outs are typically worth. The city's law department did not respond to requests for comment.)

Hassett doesn't deny that Ivondale Street needs help, but he says the hillside it sits on is no longer moving. Despite the grave reports on Ivondale in the past, the city never commissioned a follow-up study to the one D'Appolonia completed in 2005. But Hassett says his department has since determined that the hillside has stabilized.

Still, he acknowledges, "it's not to say that if another Ivan comes through it would not destabilize things."

"This is ongoing," Ingoldsby says. "We're not blowing smoke."

At the July 13 task force meeting, residents were informed that the city's law department recently conducted appraisals for properties on Ivondale.

"The point was to get the city some numbers," announced Maria Palermo, a staff member for Councilor Shields, declining to disclose appraisal figures. "Do we buy out all the properties and close out Ivondale forever? Or do we fix the street?"

The appraisals came as positive news to residents who had long feared that the city was just waiting until properties on the hillside could be condemned, saving the money needed for buy-outs or street remediation. But residents are hesitant to get too excited.

For one thing, some say it's impossible for the city to fairly assess their properties' value. Residents say they have long put off repairing their homes, unsure whether their houses would soon be bought out or further damaged by the deteriorating hillside.

"[The city] assessed the place for what it looks like now," says David Kolesar, Arlene's son, "not for what it could have or should have [looked like]."

Ivondale residents are mixed on the prospect of buy-outs. Some say they see no option but to relocate, while others would prefer to stay on the hillside.

"I'm beyond repair," says Ingoldsby. "I've resigned myself to the fact that I need buy-out relief."

At 80 years old, however, William Kolesar can't imagine leaving the home his parents built. "Where am I gonna go?" he asks. "What am I gonna do?"

Whatever the fate of Ivondale may be, Shields says the city must act now.

"The ball's in the mayor's court," Shields told residents during the July 13 task force meeting. "It's time to make decisions."

And not just decisions about Ivondale residents. As Shields noted during the meeting, residents living on Saline Street, which sits below Ivondale, are also suffering from the landslides. "We've got to deal with Saline Street, too," he said.

Ellen Gula, a board member for the Greenfield Organization, says her group intends to schedule a meeting with the mayor and other city officials in September. "The plan is to keep the city on their toes," she says, "to keep their attention so they don't slough us off."

"We're not even close to a resolution," he says, dejectedly. "Until [Ivondale] gets on the city budget, they're gonna do a lot of talking."