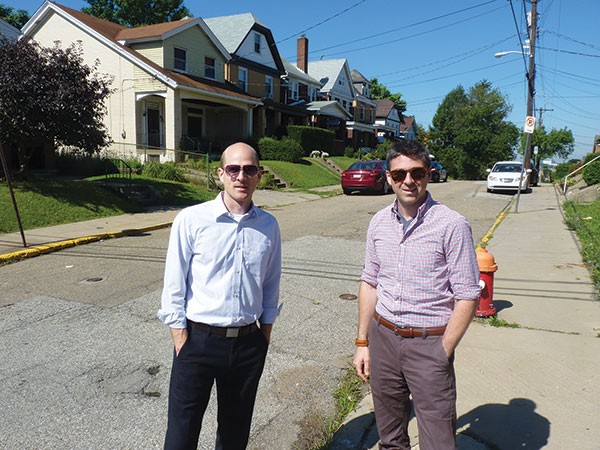 Photo by Lauren Daley
James Eash and Jason Kambitsis, of the Mount Washington CDC, say that homes on Eureka Street in Mount Washington recently sold for significantly higher than homes in nearby hilltop neighborhoods.

The house Connie Wellons first moved to in Beltzhoover in 1960 once sat five houses from the corner.

Today, it sits just one house away: Three of its neighbors have burnt to the ground, and the city demolished the fourth.

"No one is there to take care of them," says Wellons of many of the homes and overgrown lots in her neighborhood. "The area is depressed."

Such problems are hardly unique in Pittsburgh. Many communities struggle with aging residents who are unable to take care of the property, or don't have family to tend to it when they're gone. But the contrast between progress and stagnation can be especially visible in the city's "hilltop" neighborhoods — most of which are wedged between the South Side and communities like Beechview and Brookline.

"A lot of it is perception," says James Eash, director of Economic Development for the Mount Washington Community Development Corp. "Two or three houses or two or three blocks make a difference."

Community planners are trying to change those perceptions. A detailed, five-year plan called the Allentown and Beltzhoover Housing Strategy is due in September.

But there are concerns that the low costs of entry into the community — the very things that make it ripe for revitalization — may attract investors who don't have the neighborhood's long-term interest at heart, and who purchase cheap properties without improving them.

"There's all this opportunity here right now," says Aaron Sukenik, executive director of the Hilltop Alliance. "That opportunity is going to get more and more expensive because of folks who are just buying up [property and holding onto it]."

However Beltzhoover is perceived now, longtime residents can recall better days. The neighborhood once had several vital community resources — among them a variety store, barbershop, hardware store, bakery and schools. In the 1960s, volunteers formed neighborhood patrols to protect the neighborhood from unrest during the civil-rights era.

Such community institutions don't exist today. Several bars moved into the area, Wellons says, some bringing a disorderly clientele with them. And as families and homeowners aged, "stability moved out," she says.

Or as life-long resident William "Bucky" Stephens puts it, "We went from a self-contained neighborhood that other communities wanted to be like — to this."

"We realized the housing stock in Beltzhoover had already gone down," she says. "We wanted to rebuild. Little did we know in 2013 it'd be worse than when we started."

Statistics paint a grim picture. Across the 12 hilltop neighborhoods, homes sell for less than half the price of the average home in the City of Pittsburgh, according to a July analysis from the University of Pittsburgh Center for Social and Urban Research (UCSUR). In 2012, homes in Beltzhoover sold for an average of $12,341 — the lowest on the hilltop. In Allentown, the average was more double that, at $29,898, while Mount Washington's average was the highest of all hilltop neighborhoods with an average of $94,969.

So how can there be such drastic disparities in homes separated by a few feet?

"Pittsburgh is really divided by geographic and historic lines," says Bob Gradeck, project manager of the Pittsburgh Neighborhood and Community Information System, who worked on the UCSUR study. "They're still in place and fixed in people's minds."

The quality of housing stock also plays a role; in Beltzhoover, Gradeck notes, homes tend to be much older.

That leads to streets peppered with well-maintained houses situated next to crumbling and dilapidated buildings or overgrown, vacant lots strewn with trash.

But community planners are hoping to buoy development by turning around some of the lower-cost properties — and the neighborhoods' assets. The Allentown and Beltzhoover Housing Strategy project, for example, will identify and prioritize rehabilitation projects and key corridors for revitalization.

For Sukenik, some areas are obvious places to begin: parts of Allentown that have sweeping vistas of the South Hills and Downtown Pittsburgh, for example, as well as areas along Beltzhoover Avenue and other "small gateways to the neighborhood."

The group also hopes to build off stronger existing markets — like Mount Washington — and assets like Grandview Park, McKinley Park and the Boggs Avenue light-rail station. Allentown has the Warrington Avenue business district, and both areas have easy access to mass transit, and proximity to parks and elementary schools. The Port Authority and the city, meanwhile, have been rehabbing Warrington Avenue and surrounding streets.

The Allentown and Beltzhoover Housing Strategy project is funded by the Pittsburgh Neighborhood Renaissance Fund with support from the Mayor's Office, the Urban Redevelopment Authority and the Department of City Planning. It's administered by the Design Center through the Design Fund Program.

"The potential here in Allentown is more immediate because you're building off the strengths — it's got views, Grandview Park, it's very close to Downtown and has a business district," Sukenik says. "Beltzhoover has an opportunity, too — it's similar in terms of the assets, but it's going to be different in terms of the city living." Because of Beltzhoover's large size and ample green space, for example, "It would be more of a bedroom type of neighborhood."

Large housing-market disparities aren't unique to the hilltop. Kyra Straussman, real-estate director for the Urban Redevelopment Authority, points to an example on the other side of town — along Penn Avenue in Garfield and Friendship. "On the Friendship side of the street, there have been [many] more housing investments and opportunity," Straussman says.

"More people want to be in Friendship, so they are much more likely to come in and get a house that's in disrepair and see their investment pay off, because there's enough market draft behind you."

"What you have in Allentown and Beltzhoover ... is a small number of transactions, period, so it's just not a very strong housing market," Straussman says.

Because property costs so low, well-intentioned investors may think they're getting a deal, but are then unable to invest the amount of work that's needed to bring the house or lot back from disrepair.

And though home-ownership rates in the hilltop area were higher than the city's overall rate, there's been a steady decline in home ownership over the last decade, the UCSUR study notes. Gradeck at Pitt says half of the homes recently sold in the hilltop were purchased by housing investors. Most of those investors are "mom-and-pop-shop operations" that own a few properties for rent, Gradeck says. Then there are larger investor groups who buy up large numbers of cheap properties on speculation with the hopes of turning a profit by renting them, flipping them or re-selling them.

"Some investors are really well meaning and really do a good job providing good, quality housing," Gradeck says. "Some are a little less concerned about quality."

To residents like Wellons and Stephens, while housing stock is a critical component to improving their neighborhood, so too, is putting the right people in the houses.

"It's putting people in those houses that are prideful," says Stephens. "Prideful enough to keep that property up."

A Monessen elegy: the political struggles and controversy of managing a declining Rust Belt town