Some medical experts say in-home dialysis is the wave of the future. So why aren't more people doing it? 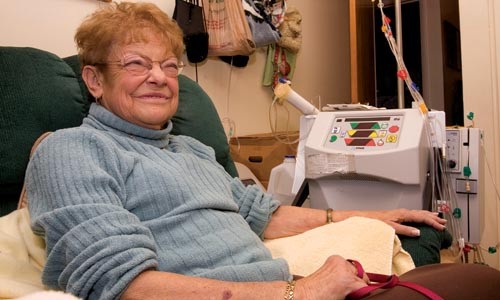 Photo by Heather Mull
Sandy White says she prefers the rigors of daily dialysis at home compared to getting similar treatment in an out-patient clinic.

Sandy White's nightmare started when her kidneys stopped working, and it's been going on for more than a decade. Diagnosed with kidney failure in 1990, the 65-year-old Oakdale resident has been coping with the life-threatening illness -- and with treatments that can cause more complications than they cure.

Initially, White treated her condition with peritoneal dialysis, a treatment which uses a catheter, inserted into the patient's abdomen, to filter out waste. It usually requires three to five, 30- to 40-minute exchanges daily, and White says it wasn't too problematic. But that was before she developed peritonitis, a potentially life-threatening infection, which resulted from bacteria entering her body through the catheter. White was lucky enough to receive a kidney transplant in 1993 -- something only about 17,000 of the 70,000 patients on the waiting list get each year -- but her troubles only got worse. The transplant drugs accompanying White's new organ caused her to develop skin lymphoma, a type of cancer.

"I'm very leery about transplanting again," White says. "Dialysis is not as bad as cancer."

As a result of the cancer, White had to stop taking her immune-suppressing transplant drugs. That, in turn, cost her the kidney in 1999. White was then forced back into dialysis treatment, where she tried hemodialysis, a method which artificially separates toxins and excess water from the blood. Hemodialysis is usually performed in dialysis centers three days a week for three-to-four hour sessions. During in-center treatments, White says she "never felt well. I always looked forward to my days off.

"I would always have headaches after treatment," she continues. "You're wiped out. You come home and take a nap."

But thanks to new medical technology that allows her to treat her kidney failure on her time, in her home, White's luck has changed.

"I feel like a free person," White says. "I fit dialysis into my life; my life doesn't fit into my dialysis."

White might not seem like much of a pioneer, but in fact she's on the cutting edge of treating one of America's most vexing medical problems.

More than 20 million Americans -- one in nine adults -- have chronic kidney disease, which can lead to outright kidney failure. White is one of more than 400,000 Americans who suffer from kidney failure, in which the kidney permanently ceases to function, usually due to medical conditions such as diabetes and hypertension.

As diabetes and hypertension rates rise, the number of Americans with kidney failure is expected to increase by more than 200,000 in less than 10 years, according to the U.S. Renal Data System. Fortunately, new technological advances are enabling White and thousands of others to live relatively normal lives while treating their disease.

According to the U.S. Renal Data System, the physically draining hemodialysis is the most popular treatment, used by 91 percent of the kidney-failure patients.

White was one of them until medical staff at Allegheny General Hospital suggested she try using the NxStage System One, a 70-pound dialysis machine that is roughly the size of a television -- and that can be used at home, by patients themselves.

Allegheny General Hospital is one of the first hospitals in the country to conduct clinical trials with NxStage. And White is one of only seven patients at AGH currently using the device -- as compared to the roughly 2,000 patients undergoing dialysis in Allegheny County. But home dialysis may be catching on.

"There are so many benefits" to the portable dialysis system, says Kelley Berton, White's nurse at the home-dialysis program at Allegheny General Hospital. Since treatment is done more frequently than traditional hemodialysis, Berton says it functions more like a kidney, which works around the clock. As a result, patients can control their blood pressure better, sleep better and have more freedom with their diet.

"It's improving a lot of patients' quality of life," Berton says. "They don't have the ups and downs" like they do with the more traditional treatments.

White agrees. She and her husband, John, perform treatment with the portable device five nights a week, but they have the luxury of changing that routine whenever they want.

"In the treatment center," White says, "someone else is pulling the strings, and you're the puppet.

"Now, if my grandkids have stuff going on we can do it at a different time," she continues. "You can work around those things because of this machine."

White says she does not feel as fatigued as she did during previous treatments. And within six months of starting the new treatment she was able to stop taking three of the blood-pressure medications she was using.

Some medical professionals are taking notice of such results. According to Beth Witten, a social worker for the Medical Education Institute, NxStage System One is currently the only FDA-approved portable home-dialysis machine on the market, but "others are in the pipeline.

"[NxStage] started the bandwagon," she says. "It's pushing other companies to make portable machines."

But at the moment, home dialysis isn't very popular. According to the U.S. Renal Data System, only about 2,000 patients were treated nationwide with home hemodialysis in 2005.

Dr. Orly Kohn, medical director of the home-dialysis unit at the University of Chicago, describes the portable system as "very innovative." But even though she's seen its use grow, "I thought it would expand more rapidly than it has."

The reasons it hasn't, she speculates, are probably rooted in "intimidation." Kohn says many patients consider home dialysis a huge responsibility, especially since kidney failure claims the lives of about 80,000 people each year in the U.S.

"Lots of people just try in-center treatment first, and they get used to the dependency," says Kohn, whose clinic has trained about 10 patients on the NxStage system. "They're reluctant to give at-home treatment a try."

Plus, traditional home-dialysis units are large and complex. White's first dialysis machine "was the size of my husband's computer cabinet," she says, pointing to the five-foot-high piece of furniture. And "There was always something wrong going on with the old machine."

But her NxStage device, made by Massachusetts-based NxStage Medical, is much easier to use. "Everything is simplified with this machine," White says.

That's why White and medical experts are excited about the potential for portable home systems to revolutionize dialysis treatment.

"Patients are pretty much at the mercy of this disease," says Deborah Hartman, CEO of the National Kidney Foundation of the Alleghenies. "I'm happy that [new, portable at-home treatments] will afford patients additional choices and allow them to have some control over this chronic disease."

Although White advocates the use of the new treatment, she admits it's not for everyone. People who don't have a partner willing to help out with the home treatment can't use the machine, since assistance is required. Berton says learning to use the device can take anywhere from two weeks to two months, depending on the patient.

Part of the reason for that may lie with the way in which Medicare reimburses for dialysis treatment. Currently, she says, Medicare pays for three treatments per week, which is standard for in-center care. At-home dialysis requires five treatments each week, though Kohn notes the overall cost of at-home treatment is smaller "because there is less hospitalization."

While she advocates the portable system, Kohn says the frequency with which it must be used, and the fact that an assistant is required to help with the treatment, can be a burden.

But for White, any of the drawbacks are more than outweighed by the benefits.