Mazarae Smith's small efficiency in Friendship is fairly neat, for an 18-year-old's first apartment -- except for those two stuffed white garbage bags propped up near the dresser.

"Trash day was yesterday," Tamara Davis calls from the hallway, in mock exasperation. "Mazarae, you're killing me!"

For the past nine years, Davis has been teaching teens and young adults like Mazarae Smith -- eight months pregnant and previously staying in a shelter -- independent living skills. As program coordinator for this large house on Negley -- one of Ward Home's three facilities in Allegheny County -- Davis helps her dozen charges learn how to keep their places clean, as well as other skills they'll need to eventually move out, from budgeting to reading a lease.

While Smith socializes upstairs, another girl is using the lobby computer to apply for hourly work on snagajob.com. Other girls have already left for Peabody High School.

There's a curfew here, and Smith and the other girls have to meet certain goals in education, jobs and personal responsibility. That's because they're all being supported by state money funneled through the county's Office of Children, Youth and Families. They're eligible for such support until they're 21. Agencies like Ward Home allow young adults who have either grown older than the traditional foster child, or who have never been under foster care, to sign on for CYF's transitional program and receive help becoming self-sufficient.

Smith has been living here a little more than a year. "It's done a lot for me," she says of the agency, including helping her secure a scholarship to get into Penn State-Greater Allegheny, in McKeesport, where she is majoring in applied psychology.

Her aim is to "just try to better myself as a person and reach those goals I want to have in life. Continue college, raise my daughter -- hopefully I'll be on my own. I know it won't be no time soon.

"I like it here," she concludes. "It's like living on your own, really." Except as of yet, she doesn't have to pay any bills.

Trouble is, the Commonwealth of Pennsylvania hasn't been paying its own bills lately, since legislators and the governor have failed to agree on a new budget for more than two months. And that has left the county without funding for more than 400 agencies, like Ward Home, serving 230,000 county residents. Now Mazarae Smith's apartment, her college tuition and books, her food and that winter coat she was set to get -- all are in jeopardy.

"If the state budget doesn't pass by the end of October, I will definitely have to lay off staff," says Leah Reynolds, Ward Home's executive director.

Her entire $2.1 million yearly budget, serving more than 100 young people in residential and other programs, comes from the state, via the county. "We're getting milk from one cow and the cow is dying in the field," Reynolds says.

"We were [already] underfunded by the county, $45 a kid per day" before the budget crisis, she adds. Even if there were a budget agreement tomorrow -- and the legislature claims to be close to one, although Gov. Ed Rendell says he won't sign it -- Ward Home would have a problem. The agency is already $250,000 short this year, using endowment money for one month's expenses while instituting a hiring freeze and paying only half the rent.

And, unfortunately, there are few options other than state funding. Some agencies use grants from foundations to supplement their budgets, but foundations don't usually fund a program forever. And agency boards are often loath to use endowment funds except in emergencies such as this one.

"I'm trying to create other programs that would bring a stream of money into the agency," Reynolds says. "But I can't put my energy into that because I'm busy putting out these brushfires. I'm holding onto a few bills and letting them go late. Come Nov. 1, I can't meet payroll and I'm going to have to shut down programs. If I don't have a major donor step up I'm going to have to send the kids out into the street."

Her young charges, she says, "are scared. I'm very frustrated." Mazarae Smith, Reynolds adds, "has all these goals and I tell her she can't live here anymore? It will probably ruin her, because she doesn't have the input from her life-skills teacher."

"I've been in government over 35 years and I have never seen anything like it," Marc Cherna told a packed room of social-service agency workers in McKees Rocks earlier this month. Cherna is director of the Allegheny County Department of Human Services, which oversees CYF and the other agencies getting $900 million a year from the state -- when the state has a budget. Today these agencies are owed more than $50 million from the state, he said, and some are sinking fast or have simply closed.

"I've already got calls from agencies saying, 'We can't make payroll.' ... It's going to get worse and worse."

Diana Bucco, president of The Forbes Funds -- which runs the Greater Pittsburgh Nonprofit Partnership -- noted the obvious: It didn't help to have a state funding crisis in the middle of a worldwide economic meltdown. Calls to the county United Way helpline had already increased dramatically in the first half of 2009: a 143 percent increase in requests for economic aid; a 48 percent jump in food-pantry assistance calls; a 96 percent increase in requests for utility help; and on and on. Three thousand child-care staffers have already lost their jobs, leaving 12,175 kids (and at least that many parents) in the lurch.

"Unwilling to close, given who they serve, they are borrowing and people are working without pay," Bucco said. "But this cannot last."

Mitch Swain, head of the Greater Pittsburgh Arts Council, said 28 percent of the arts programs in the group have now reduced staff, and more have reduced their programs.

Partnership leaders urged the crowd to lobby their local legislators, particularly Sen. Jay Costa (D-Allegheny), who sits on the joint Senate-House conference committee that will hammer out an eventual budget agreement.

Speaking prior to the Sept. 11 budget deal, Costa said that, should the current budget even pass, the level of funding for 2009-10 proposed by Republicans in Harrisburg "will have a draconian effect on these social-service agencies. We're fighting to restore" funds to a higher level, he said of his fellow Democrats -- although whether that will ever equal the current level he could not say.

"The budget stinks," said Joni Rabinowitz of Just Harvest, the South Side agency focused on hunger and poverty. "Even if this budget passes, there will be cuts," she predicts, since "whatever budget is passed now will be the baseline for next year. That's one of the reasons there's such an impasse."

Just Harvest is a relatively small agency, with a budget under half a million dollars, but it's already owed $48,000 this year for a food-stamp application program funded by a mix of state and federal money. Just Harvest was also prevented from signing its annual contract for Pittsburgh Community Services, Inc., to provide free tax services for low-income workers. PCS closed down two weeks ago.

"Our very big concern is ... child-care centers that are closed, so the mother can't go to work," and the child can't get the center's free meals, Rabinowitz says. Just Harvest has seen contract workers from other agencies show up to apply for food stamps.

Carol Washington knows all about the domino effect of this situation. Her own kid attends an after-school child-care program that's threatening to shut down, leaving Washington uncertain how to handle the situation -- and Washington is head of the NorthShore Community Alliance, which provides a large menu of services to the area.

"The very essence of what we do -- crisis intervention -- is the irony in all of this," Washington says. "A true crisis doesn't stop because there's no state budget." In fact, the lack of a budget is beginning to cause crises.

Eighty percent of her $2.3 million budget is from the state, via the county. "We have not laid off staff yet" -- she employs 24, including part-timers -- "but it is a continual threat," she says. "At some point you've got to put a hold on services until you get caught up."

Even if the budget were to pass this week, she adds, "You don't wake up tomorrow and say, 'We're saved!' We're still going to be a month catching up to where we were."

Leah Reynolds, sitting in Ward Home's Friendship facility, throws her hands up after explaining the effects of the budget impasse. "Why we have allowed this to continue to today is really beyond me," she says.

She tries to imagine what will happen if her young clients truly end up being forced out the door.

"Well, that means our jails and institutions will be serving them," she says, "whether the state wants to put money into it or not." 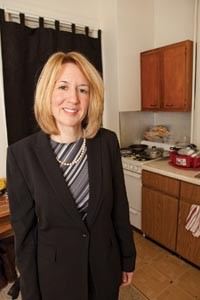 Brian Kaldorf
If a state budget isn't passed soon, says Leah Reynolds of the Ward Home, many of her clients could be forced to leave their homes.